North Coast & Northwestern BC Listing No. 20004

This rare and affordable Smith Island ocean and riverfront acreage is 10 km from Port Edward. Located in the quaint settlement of Osland, you can escape the 'hustle bustle' or live off the land and water.

This extraordinary 3.6-acre waterfront property at Osland, Smith Island has 385 feet of ocean frontage on the passage between Smith and De Horsey Islands. The passage is considered a tidal waterway where the mighty Skeena River reaches the Hecate Straight. The property has an additional 550 feet on the southern shore of Bremner Creek. The creek and the ocean form the corner boundary of the property. A beautiful canopy of cedar trees covers the property.

This property provides a chance of a lifetime with access to a bounty of hunting and fishing grounds, protection from weather systems, and means to escape the 'hustle-bustle,' or permanently reside within this tranquil settlement.

Boat access only at certain tides. From Port Edward (10 km away by boat), or Prince Rupert, a water taxi is available. Please inquire with the listing agent for details.

Northern Coastal BC is a phenomenal region of Canada, bursting with diversity and unmatched beauty. Mostly remote and tranquil, lush landscapes backdrop the mightly ocean, pristine waterways, and pure air. The sea, tidal foreshores, rivers, and forests are teeming with an incredible variety of life and opportunity—attracting local and global attention.

Smith Island lies at the Skeena River mouth, 22 km southeast of Prince Rupert. The tiny community of Osland is on the southeastern shore of the island - surrounded by outstanding wilderness and biodiversity within spectacular fishing grounds.

The Osland boardwalk has long stood the test of time and continues to be an indispensable feature linking families through gardens, shoreline, and forest. This 'highway' is locally maintained through Provincial Funds and provides residents the ability to transport goods easily—groceries, firewood, fishing gear, and feed for livestock. There are only a few deeded properties remaining.

Deep blue Bremner Lake, approx. 3 km in length and 350 m at its widest, is tucked up in the forest, east of the community. This tranquil lake spills down through Osland to the De Horsey Passage. Several smaller unnamed lakes dot the islands' interior. To the north, a long and narrow inlet/saltwater lake, depending on the tide, is accessible by water.

The closest access to the mainland is 5 minutes via water to Cassiar. From Cassiar, Highway 599 provides access to Port Edward. The highway then joins Highway 16 to head eastward through Prince Goerge, or westward to terminate in Prince Rupert. VIA Rail Canada provides passenger service with the Prince Rupert-Jasper route through the Canadian Rockies, being a prime means to explore western BC from ocean to mountain and return. Prince Rupert Airport, on Digby Island, is accessed by local ferry service and provides flights to Vancouver. The Orca Spirit water taxi services the entire BC coast.

Port Edward's numerous canneries were once the town's staple economy. Today, many residents work in forestry and fishing, with tourism increasingly a mainstay of the economy. A large portion of the well-known movie 'Avatar' was filmed in the surrounding forests where numerous film clips included the 'gnarliest' tree. Services have grown to consists of an elementary school, accommodation, restaurant/pub, groceries, and postal services.

This port city on Kaien Island is linked to the mainland by a short bridge. Just north of the mouth of the Skeena River and about 50 km south of the Alaska border, Prince Rupert is the land, air, and water transportation hub of the Coastal North. Prince Rupert's port is the deepest ice-free port in North America and is vital to the local economy. The port provides terminals for the Alaska Marine Highway System, BC Ferries, cargo ocean liners, and cruise ships. Commodities then via CN Rail's class one railway on the lowest grade through the Rocky Mountains for fast, fuel-efficient transport. It is the closest North American port to Asia with direct access to open water for safe access to shipping lanes.

The Skeena River, 580 km in length, is the second largest river in western BC (after the Fraser River), rises in the northern interior and flows southwest. Significant tributaries, the Babine and Bulkley rivers, join the Skeena to empty into Chatham Sound. This river area supports some of the largest fish populations on the coast and is a critical waterfowl habitat.

Besides fishing the ocean shoreline, fly casting at Bremner Lake, or kayaking the local waters, Smith Island is a 'launchpad' to more of the most natural and diverse playgrounds in this coastal region. Many islands' rainforests, rugged shorelines, and sheltered inlets remain unchanged and tranquil—as nature designed. All combine for an exceptional opportunity to fish, gather seafood, kayak, explore the wilderness, and view wildlife.

Ocean sportfishing is undeniably a global attraction. This region, proliferate with opportunity, as been referred to as the 'ocean supermarket.' Salmon and halibut are the two primary species sought—along with snapper, cod, black cod, rockfish, tuna, steelhead, eulachon, herring, and octopus. Clams, mussels, scallops, crabs, prawns, sea asparagus and seaweed are also plentiful given the right location and timing. Freshwater angling for rainbow, cutthroat, and Dolly Varden is also popular in nearby lakes and rivers.

There are endless kayaking opportunities for day or overnight paddles. Ocean passages, channels, and islands, the Skeena, and many small rivers offer ever-changing water and landscapes.

The opportunity to explore the coast without getting your feet wet is abundant. Trails to reversing rapids with churning waters (tide change), leisurely forest strolls, short paths winding through the city, strenuous unmaintained trails up the surrounding mountains, all satisfy personal preferences and capabilities.

Osland was founded by a group of Icelandic-Canadians, most of whom relocated from Manitoba in the early 1900s. In the 'heydays,' this community included about 49 properties along with a post office, general store, school, quarry and granite works, and a blacksmith shop. Three docks included the Imperial Oil dock and float used in the summer to supply the fish packers and gillnet fleet, the community float that went dry at low tide, and the government wharf. Oceanic Cannery, westward from Osland, was a busy operation from 1903 to 1929. Sakamoto's Boat Building Shop, which had an excellent reputation for quality boatbuilding originating in the 1920s.

The Osland sidewalk, or 'freeway,' as referred to by an early resident, was the glue of the community. Families heading to work or school, enjoying a stroll, mothers parading with babies in strollers, scooter, wagon, tricycle riders, were all a part of this tight-knit settlement. A stately 83-year-old oak tree continues to grow alongside the boardwalk.

Oceanic Cannery was one of the 80 plus canneries that once existed in coastal BC. This Cannery on Smith Island, west of Osland, was in operation from 1903 to 1929. After several changes in ownership and fire, the Canadian Fishing Company took it over in 1936, operating a fish camp there until 1950.

Port Edward was planned in 1908 when the Grand Trunk Railway decided to expand its operations to the North Coast. Speculators purchased large blocks of land, however, the railway diverted to Kaien Island (Prince Rupert) instead. The Nelson family from Norway moved to the area in 1909, and within the decade, other families became fully immersed in the fishing industry. Port Edward became the most significant fish processing area in the North.

The North Pacific Cannery, just south of Port Edward, was BC's oldest surviving salmon cannery. Built in 1889, the Cannery is now a designated national historic site and museum. Southward, The Cassiar Cannery has converted managers' residences into guest cottages. Before road construction in the 1940s, the multicultural workforce of Japanese, Chinese, First Nations, and Europeans lived on-site in cabins and bunkhouses.

When settlers and missionaries came in search of furs and other trade goods, many previously inhabited locations became trading posts and western-style settlements. With the advent of steamships and paddle-wheelers serving the area, commercial fishing has evolved into today's multi faceting economic city. 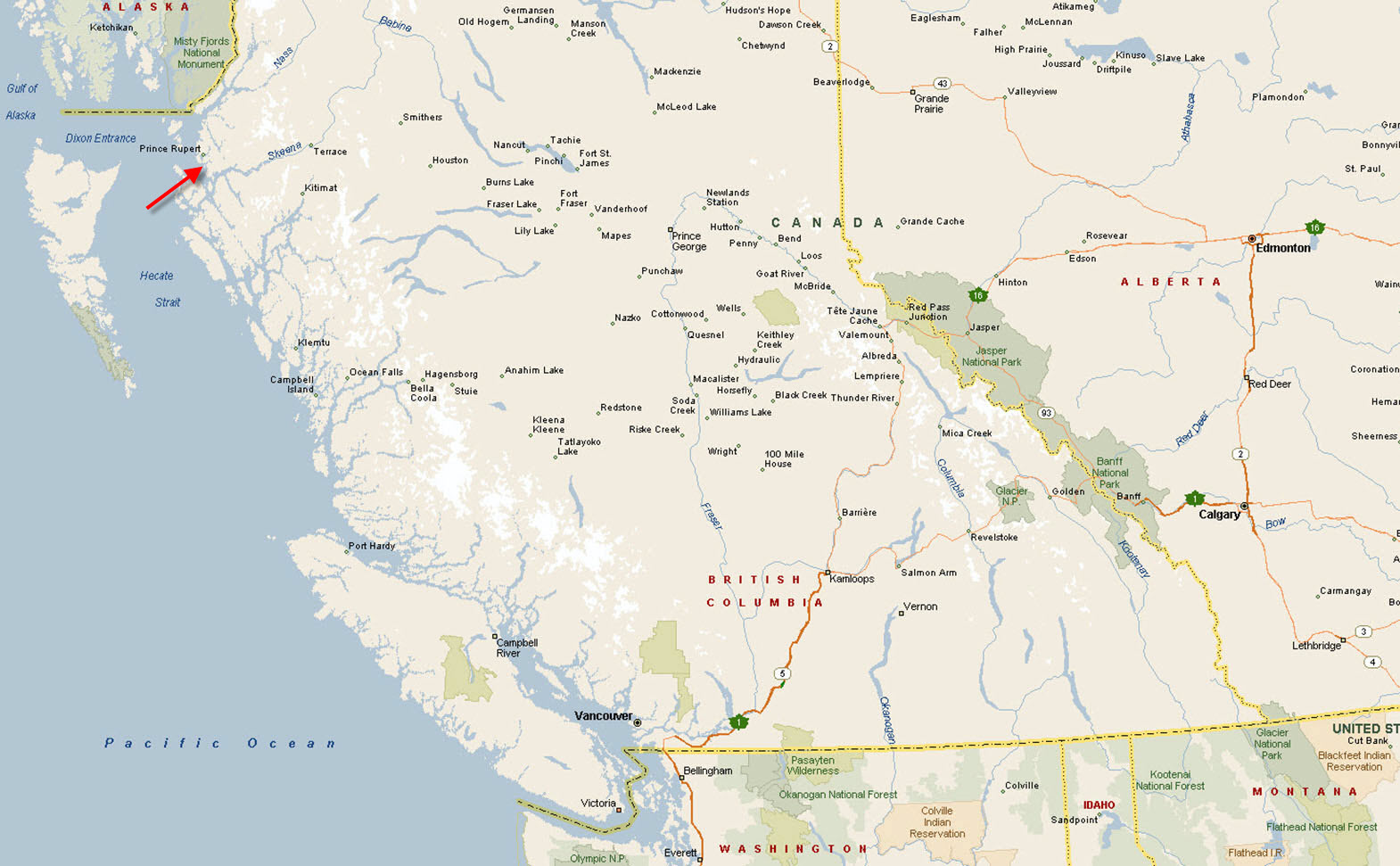 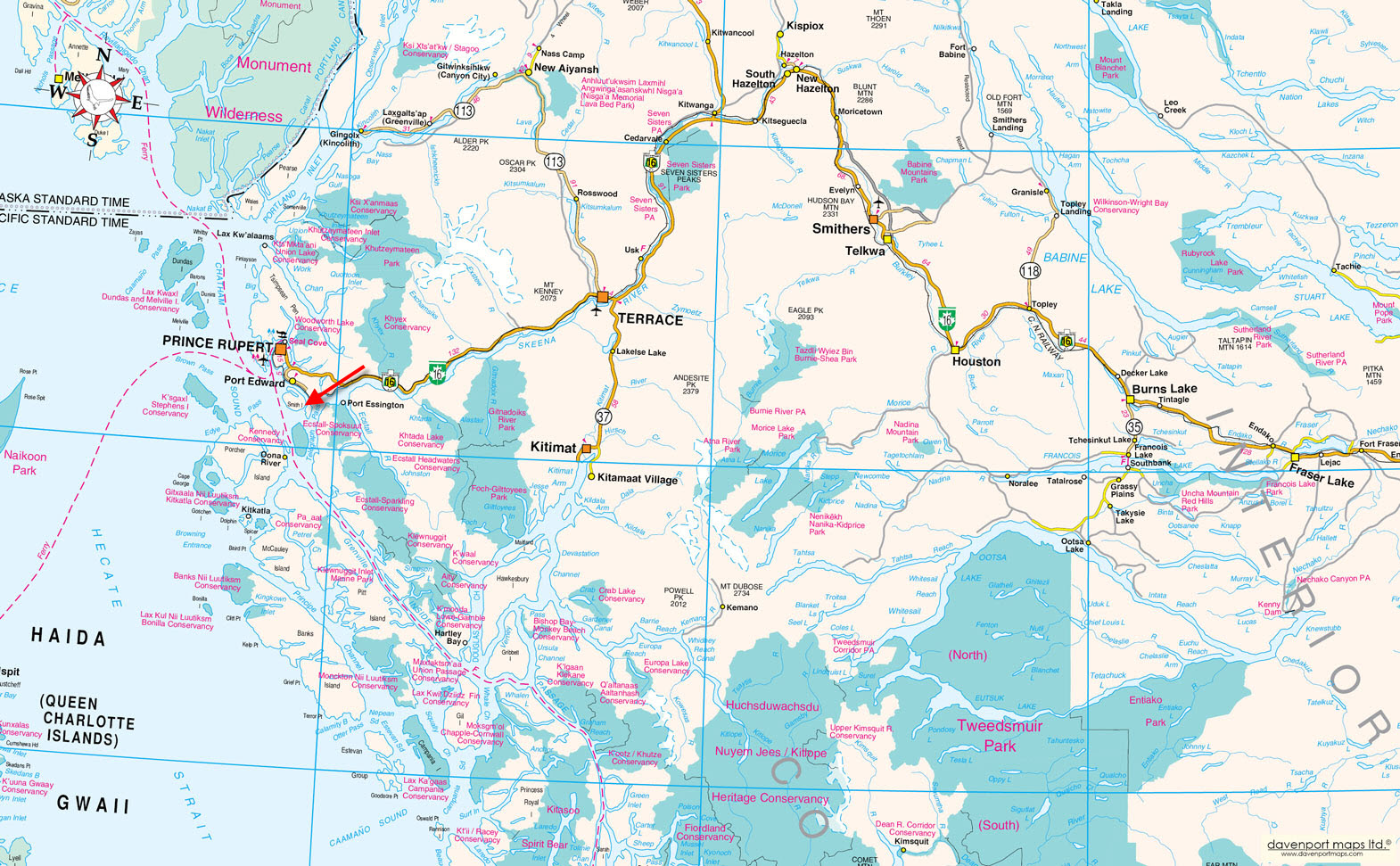 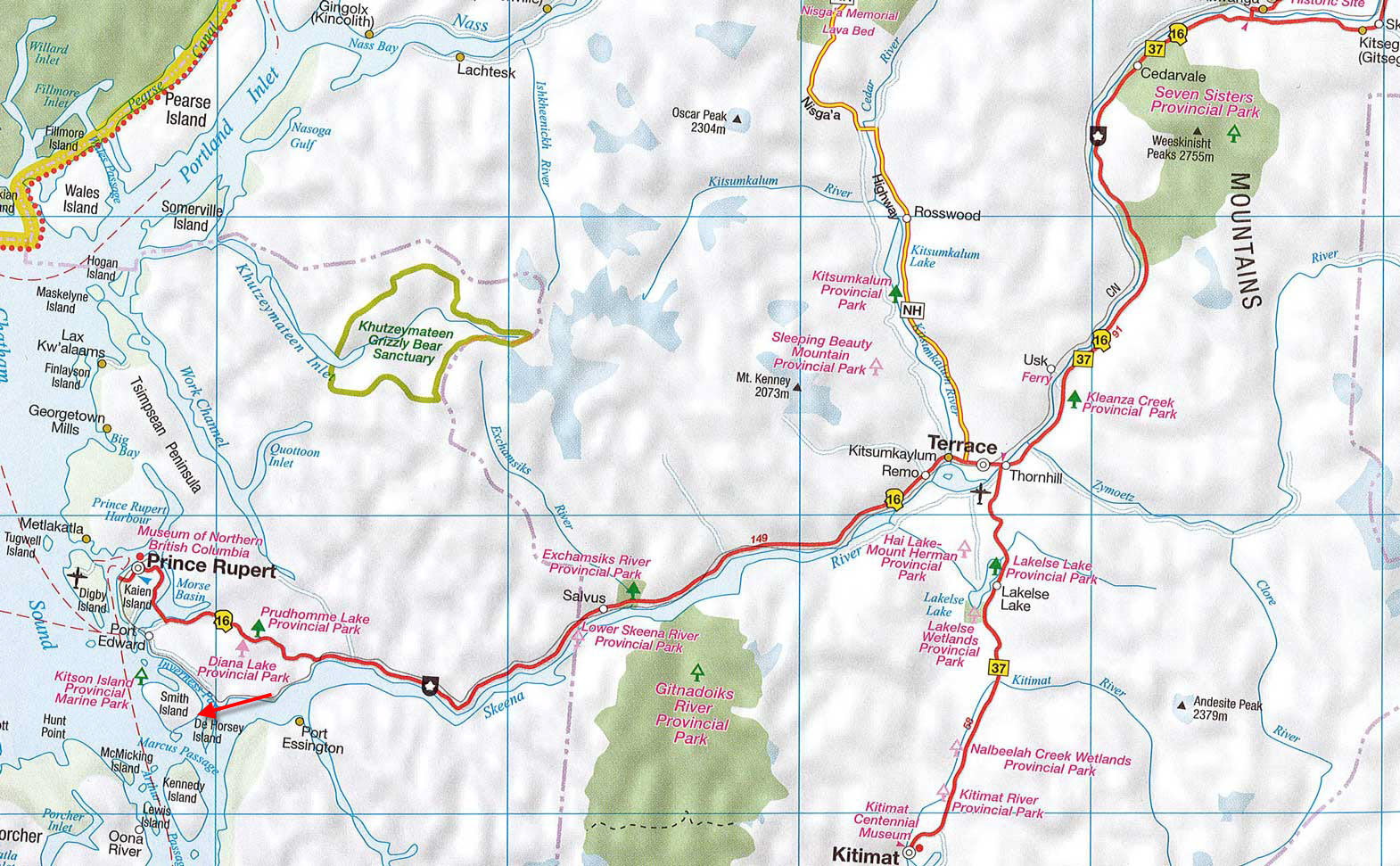 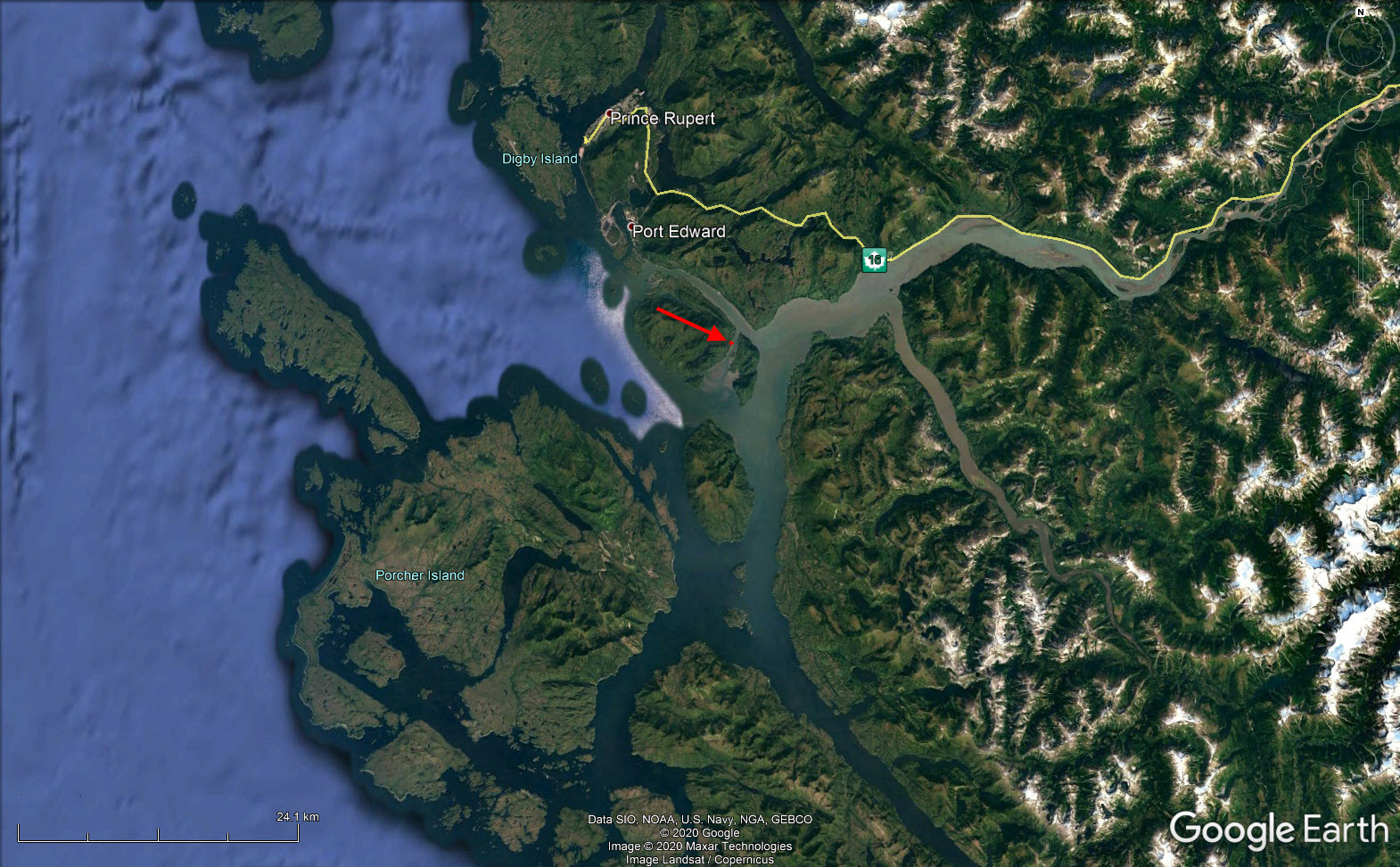 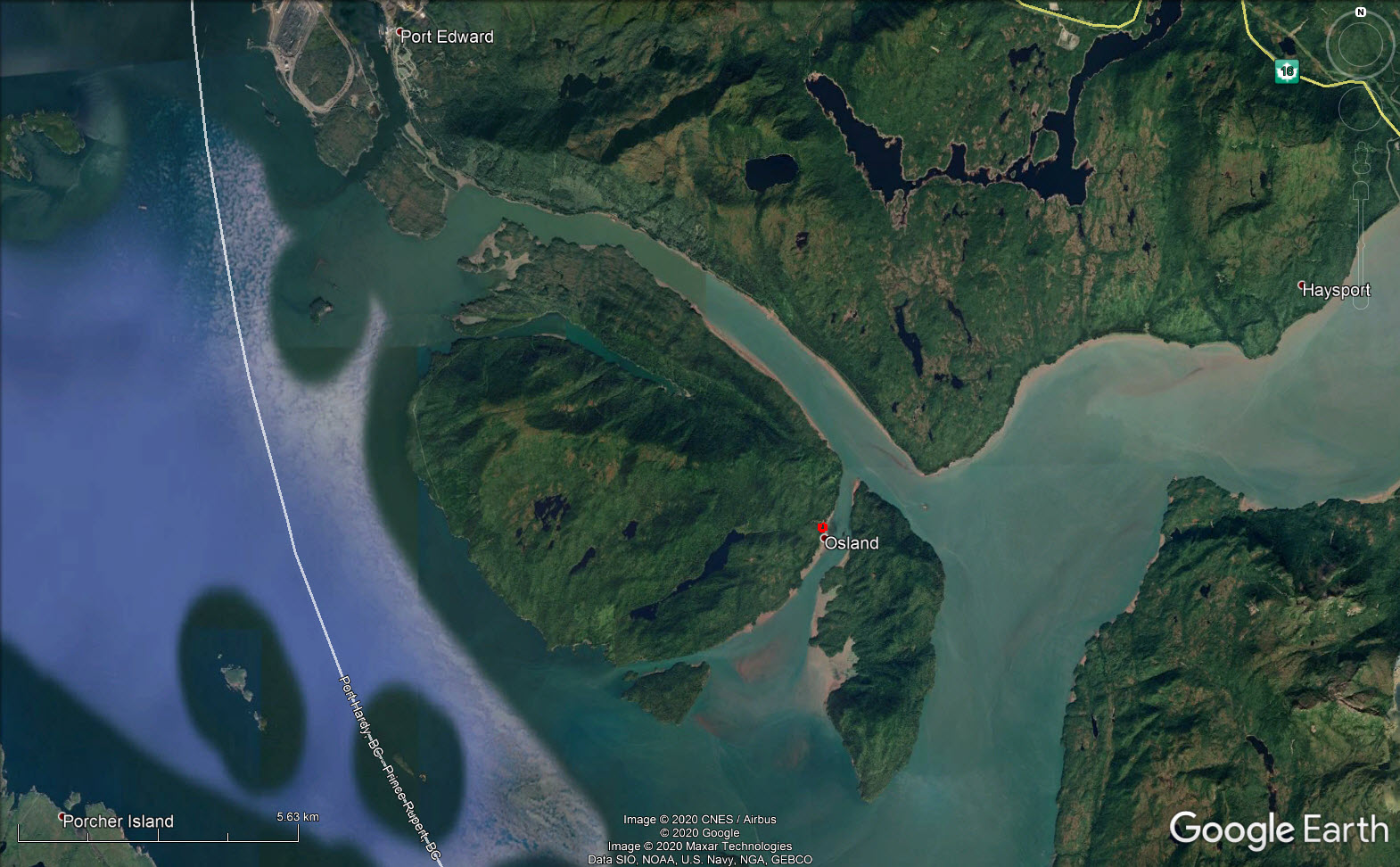 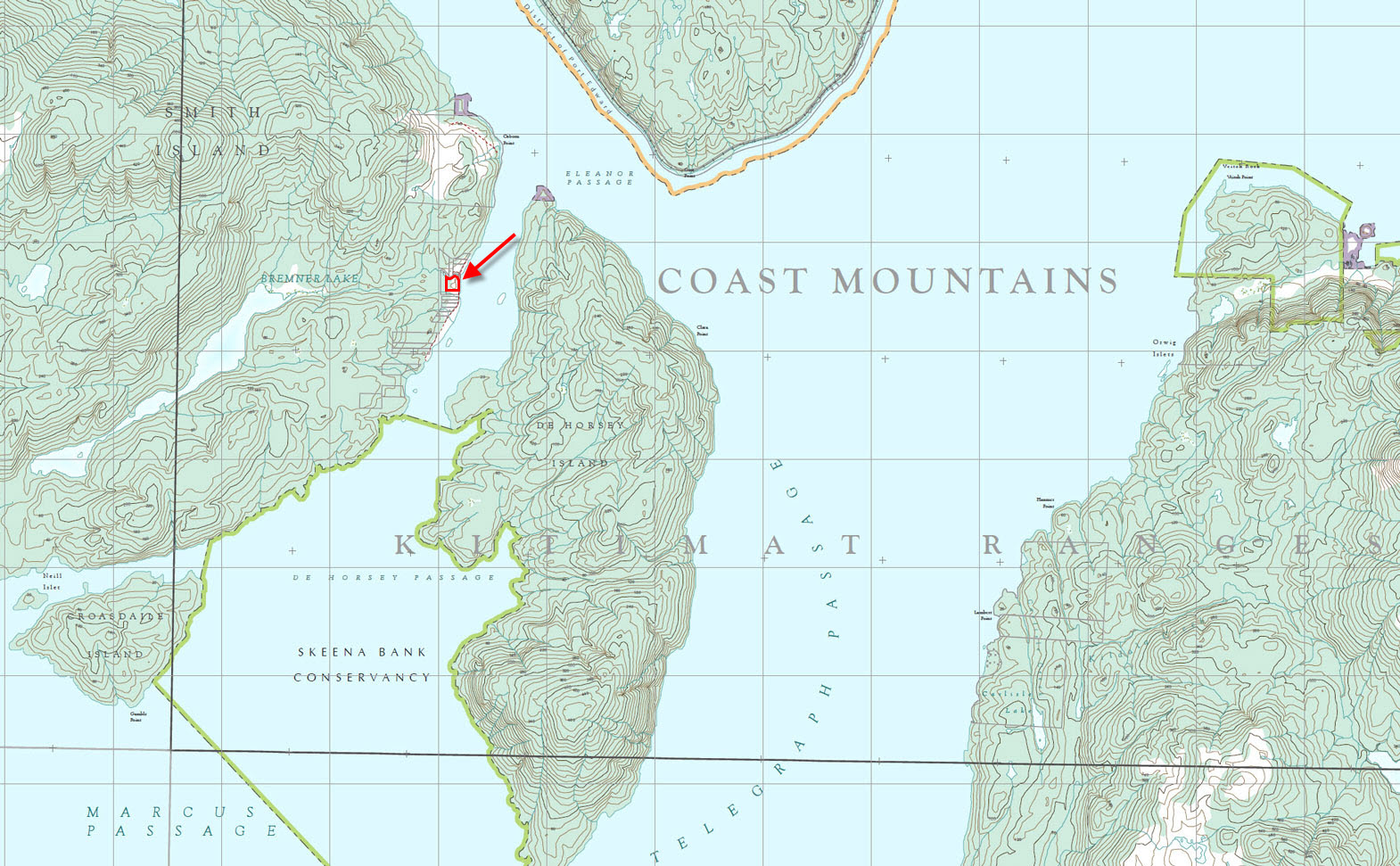 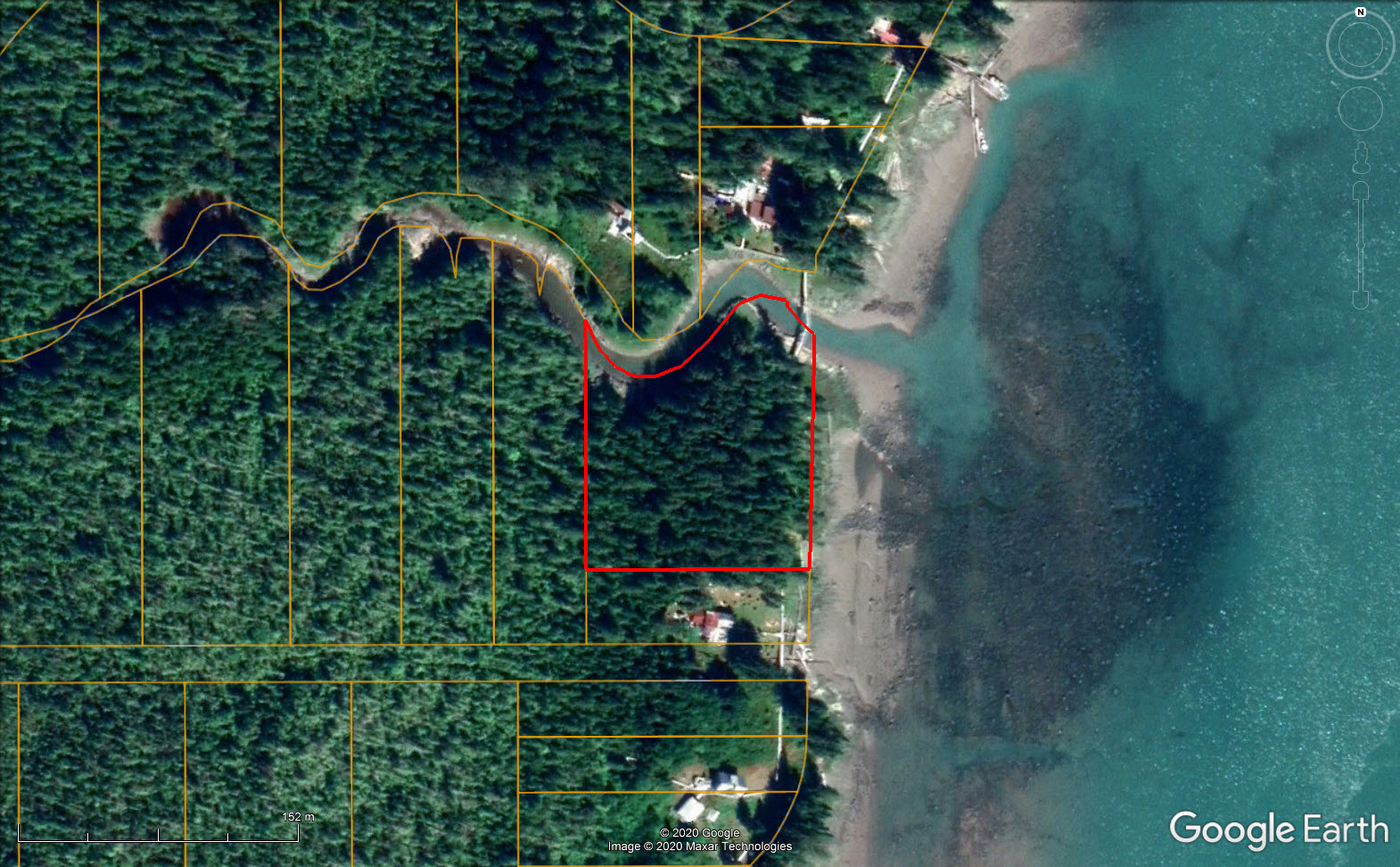 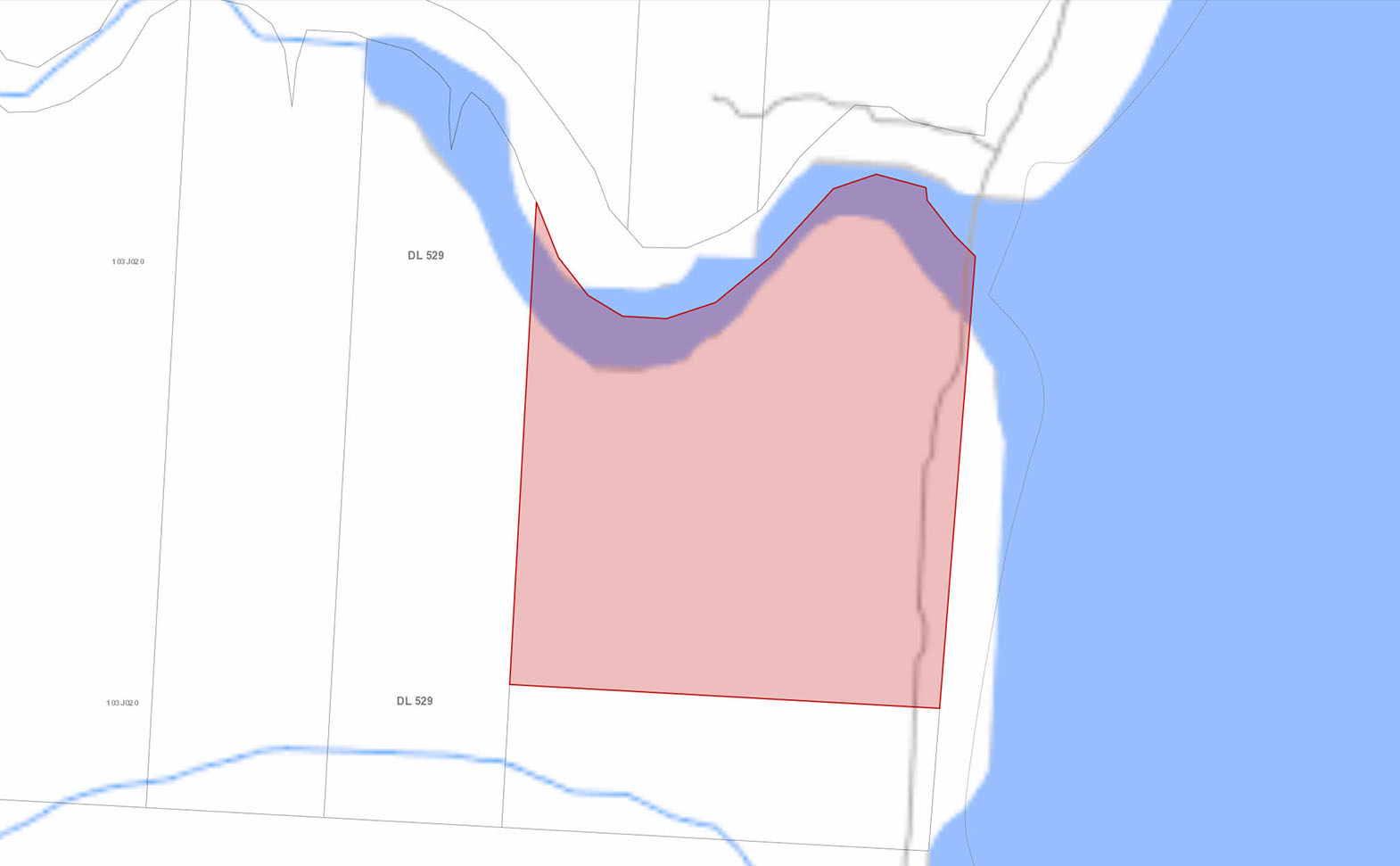