Lund is the gateway to Savary Island and Desolation Sound with a current demand for future development. Approximately 1/3 of the property is designated Lund Residential making it prime for development, given its strategic location. 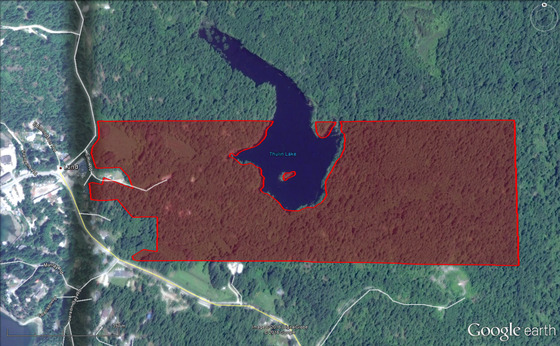 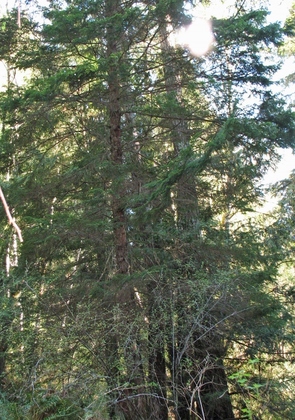 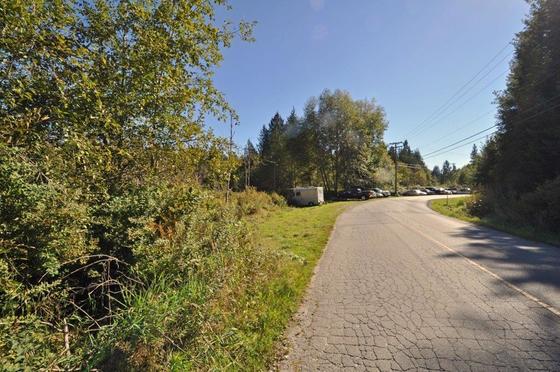 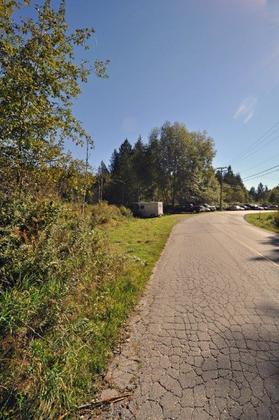 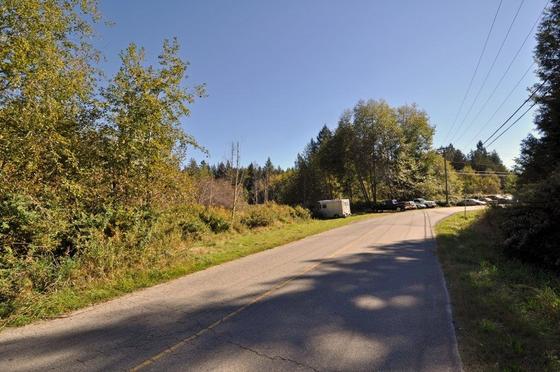 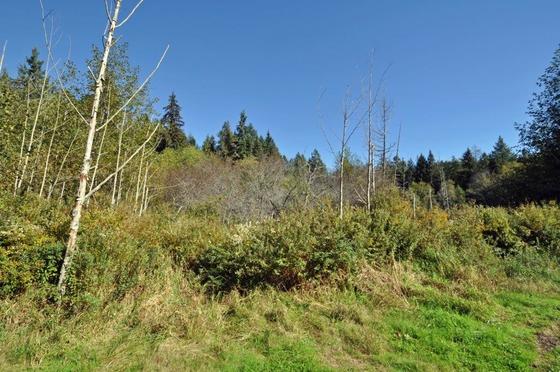 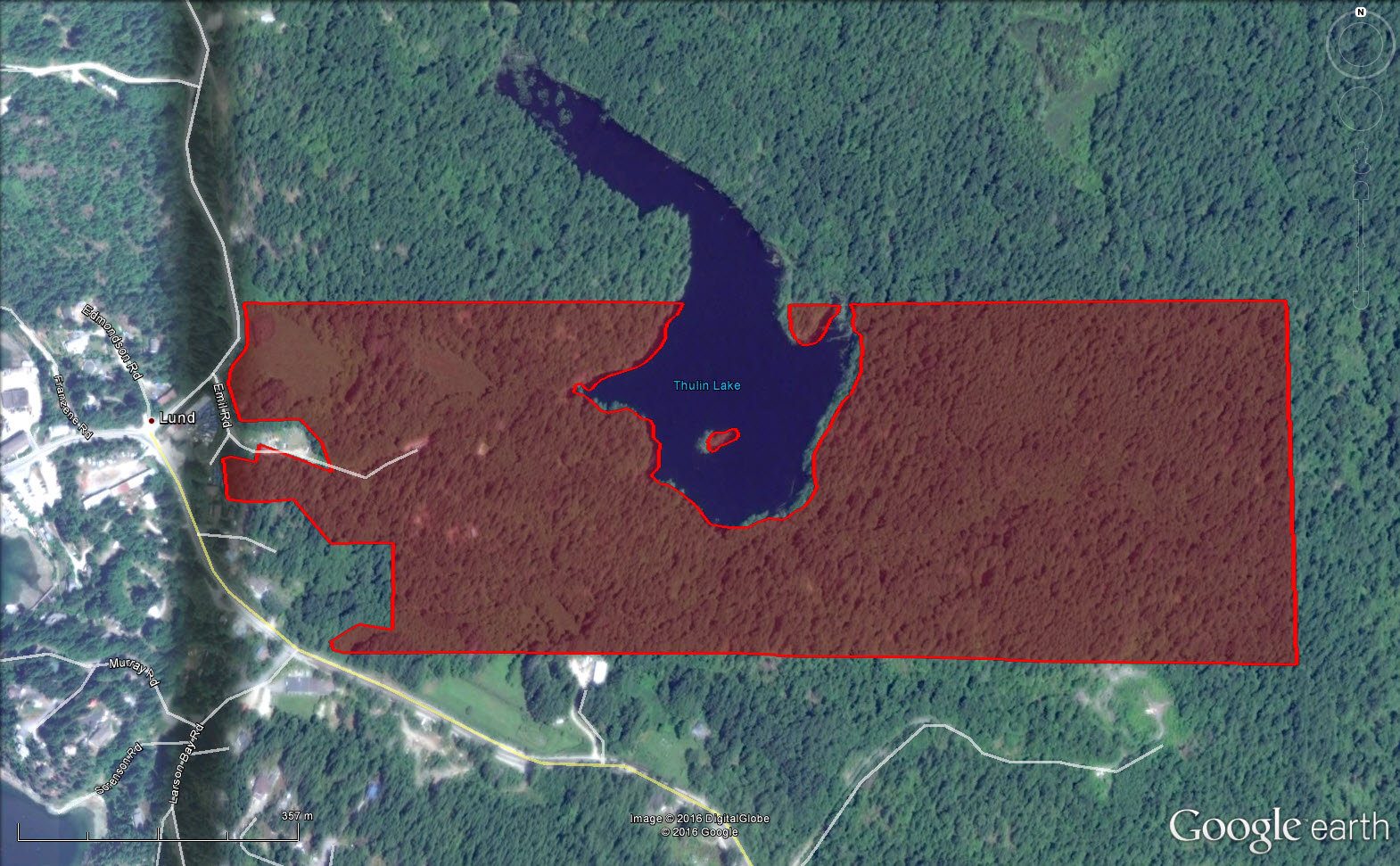 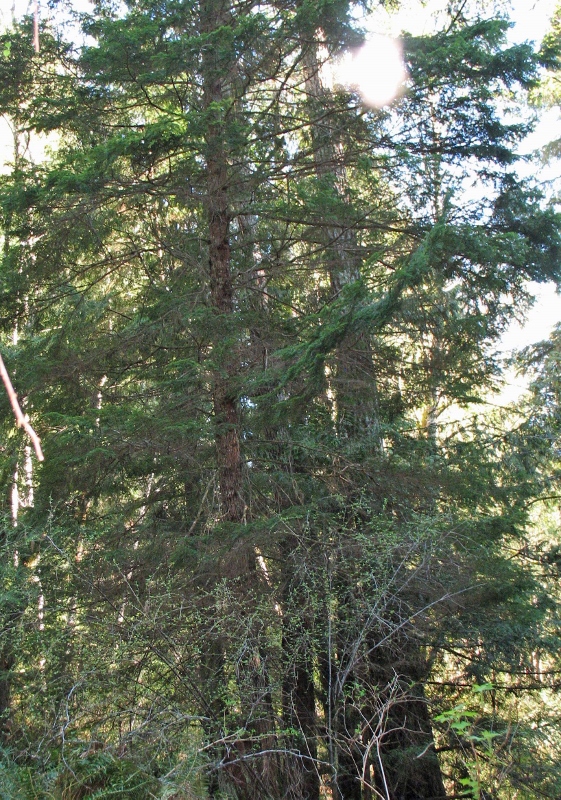 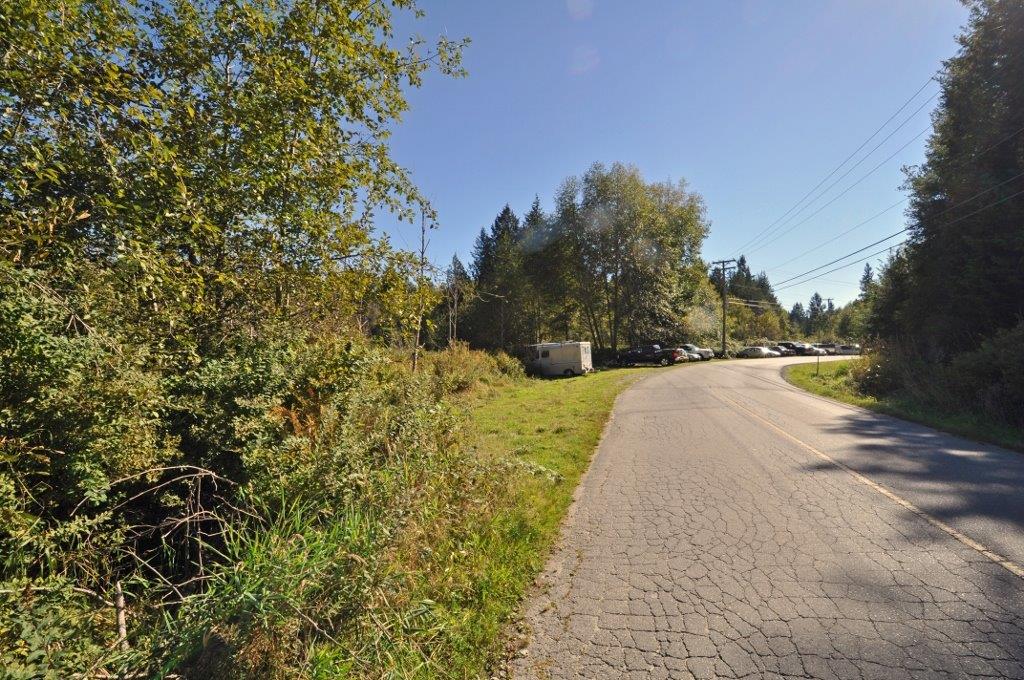 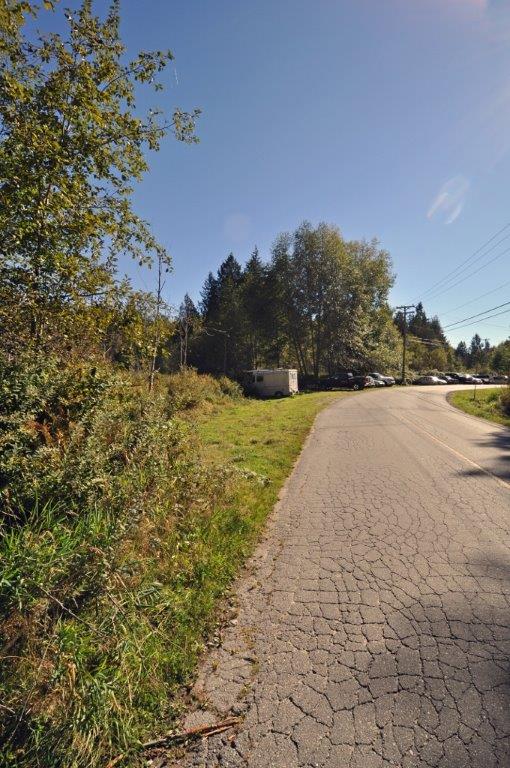 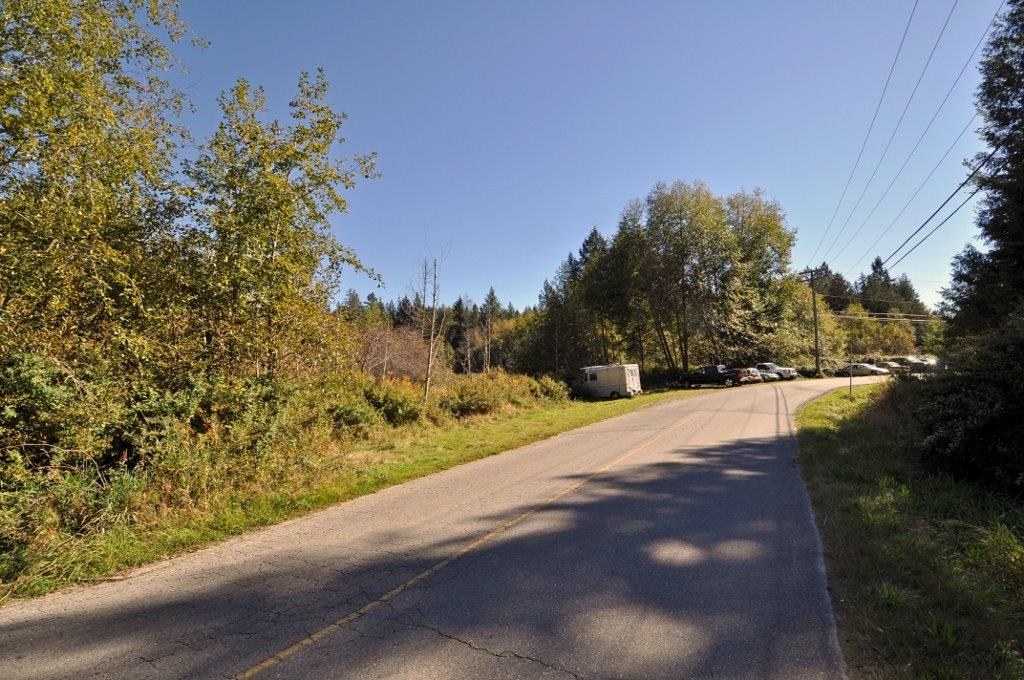 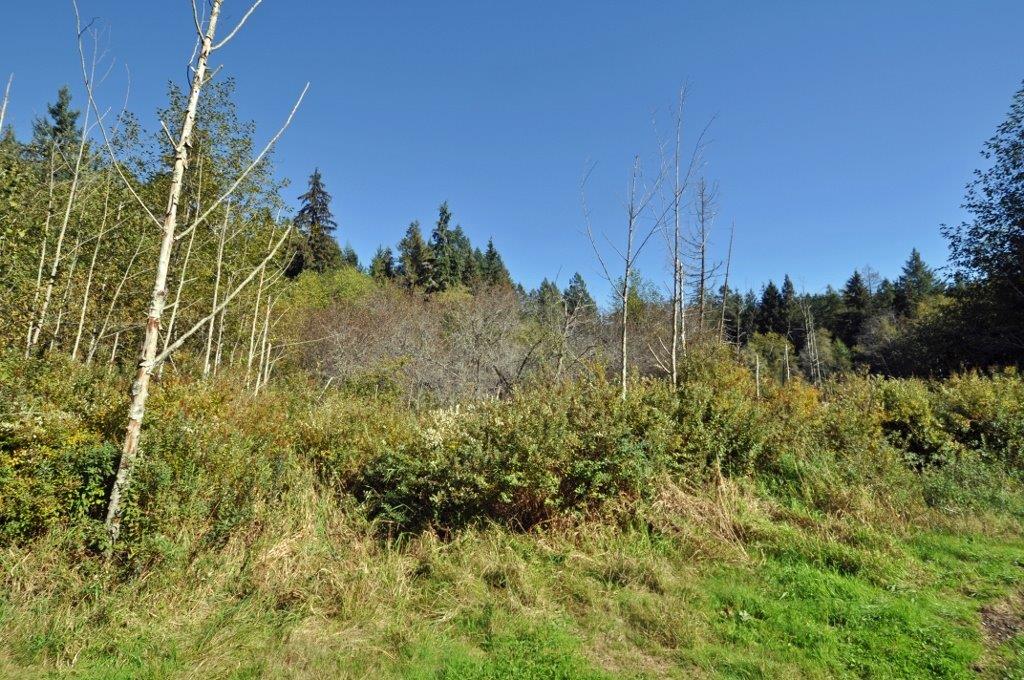 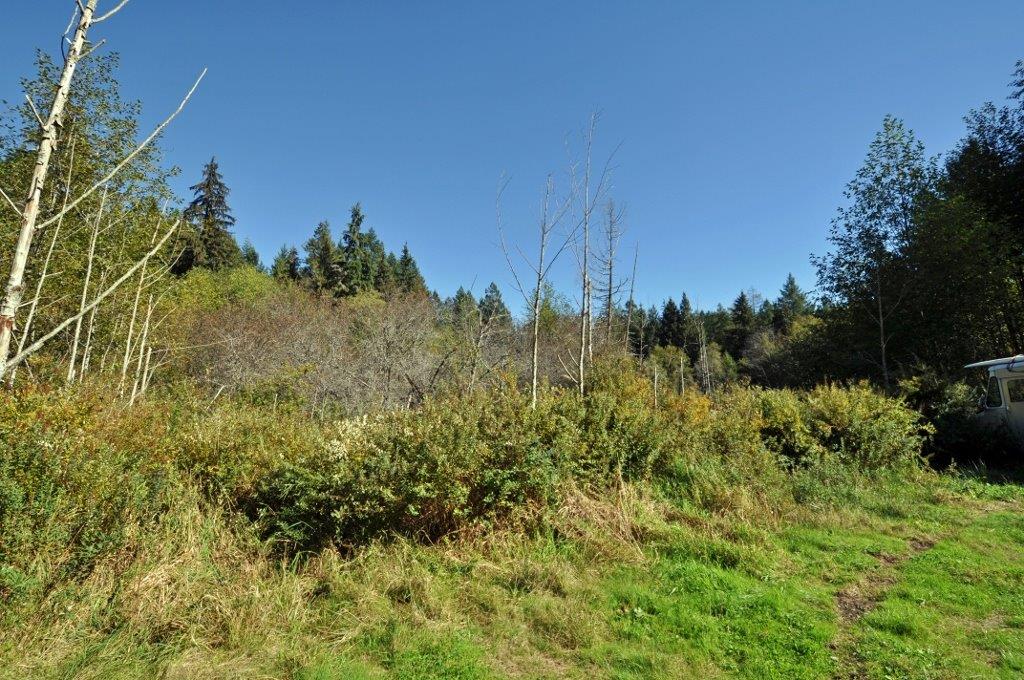 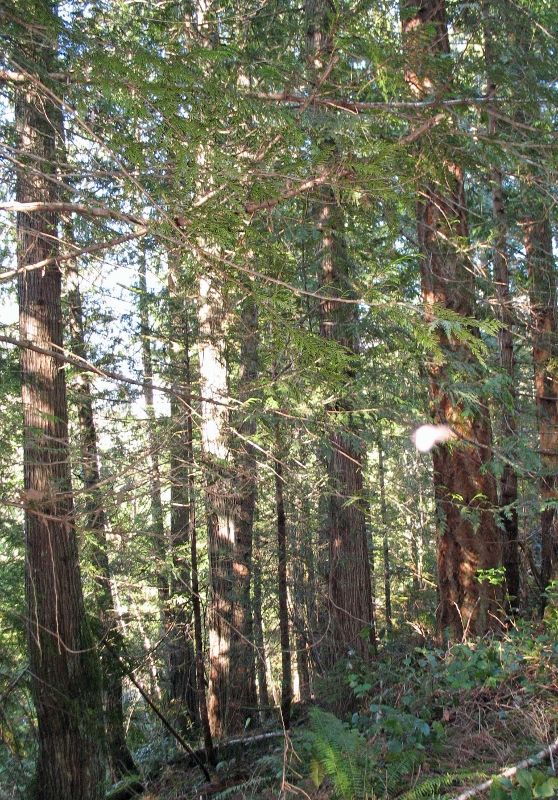 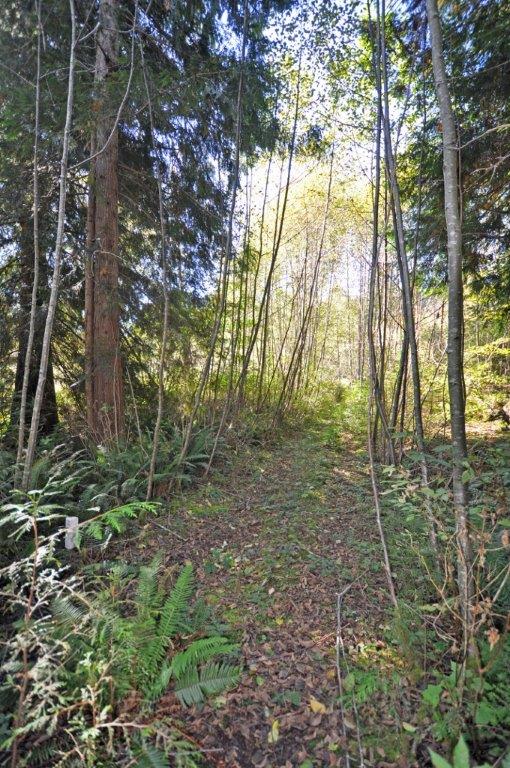 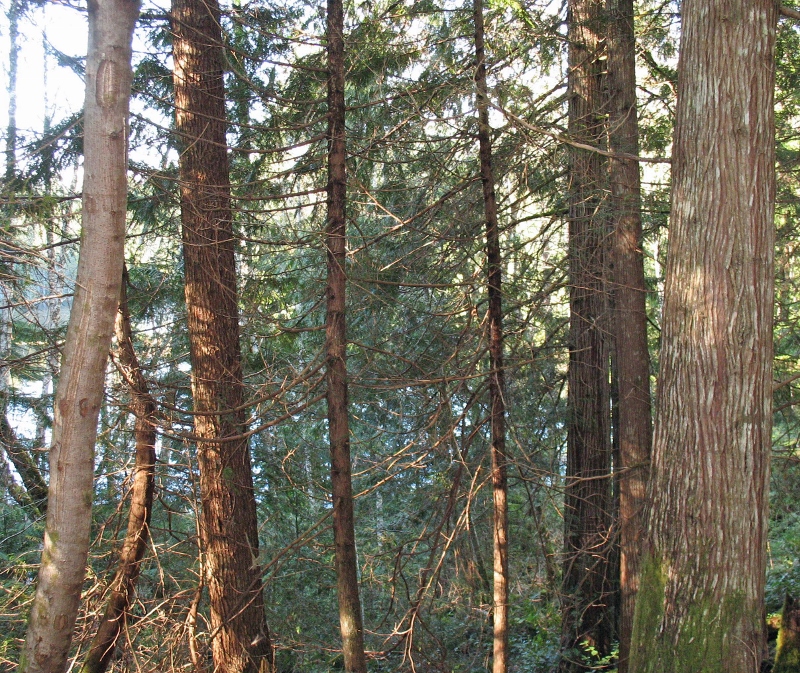 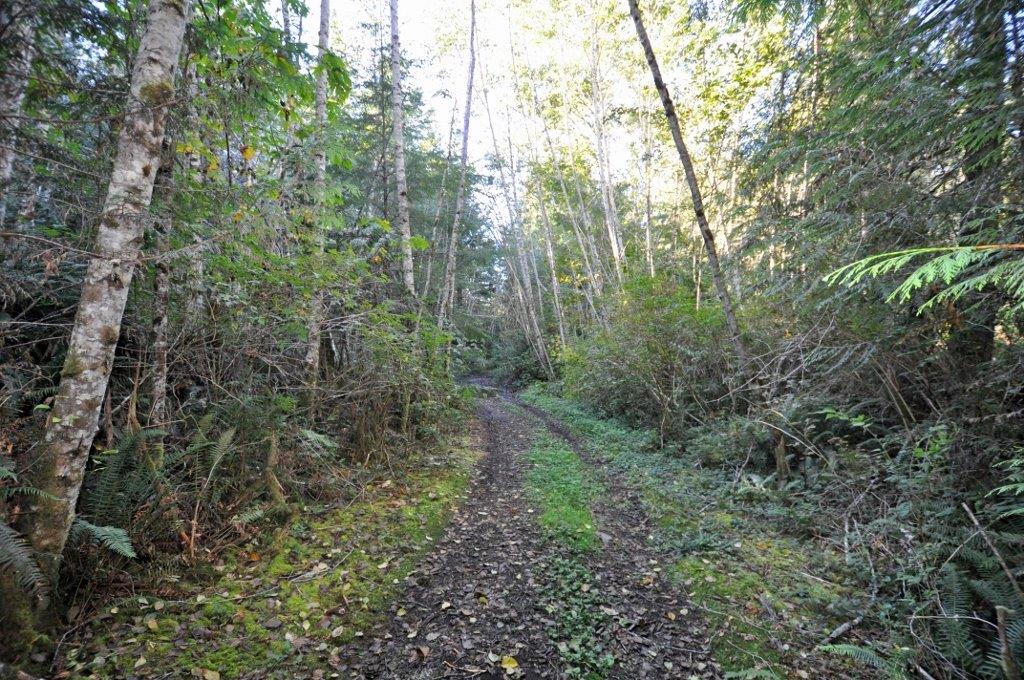 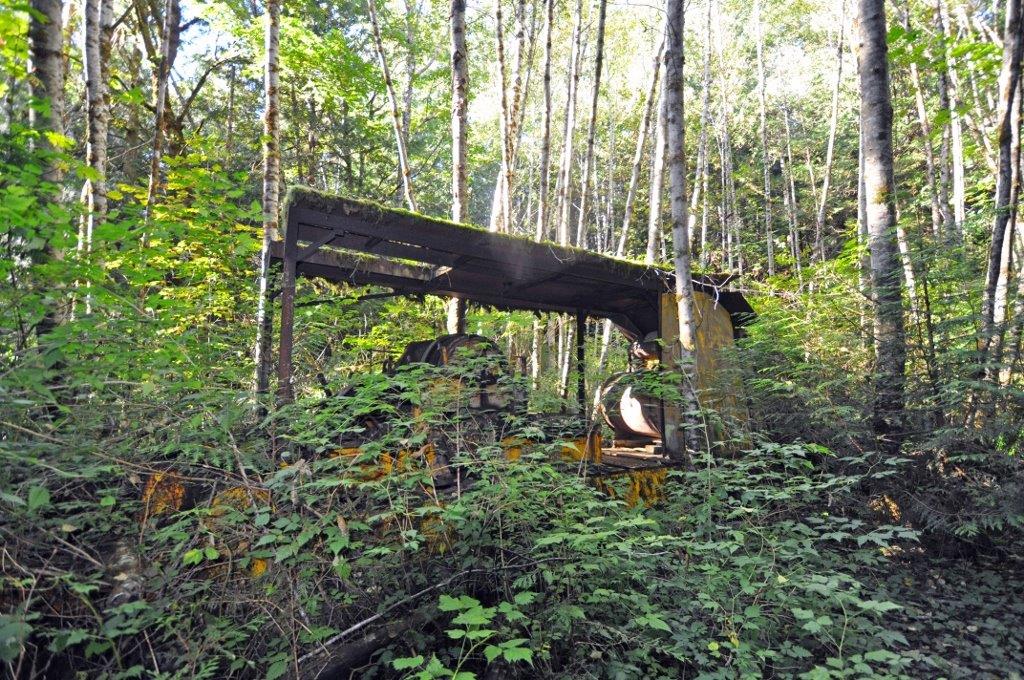 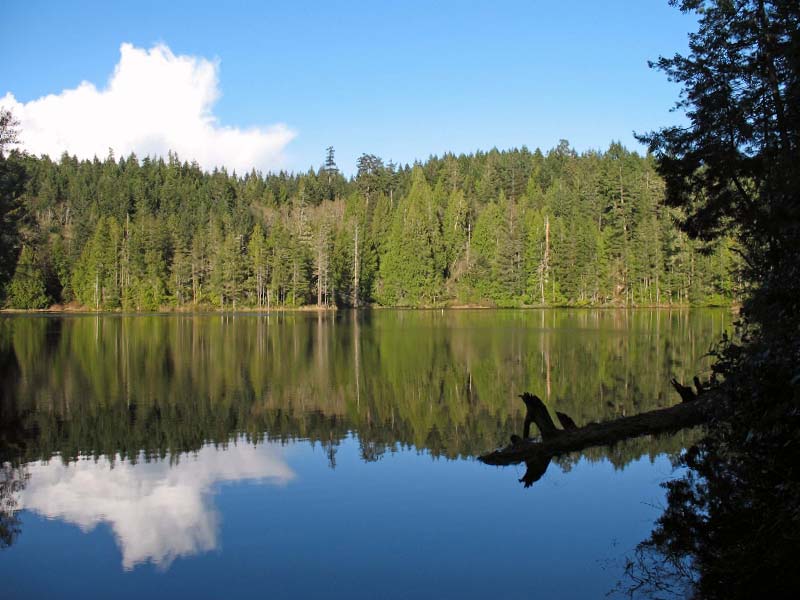 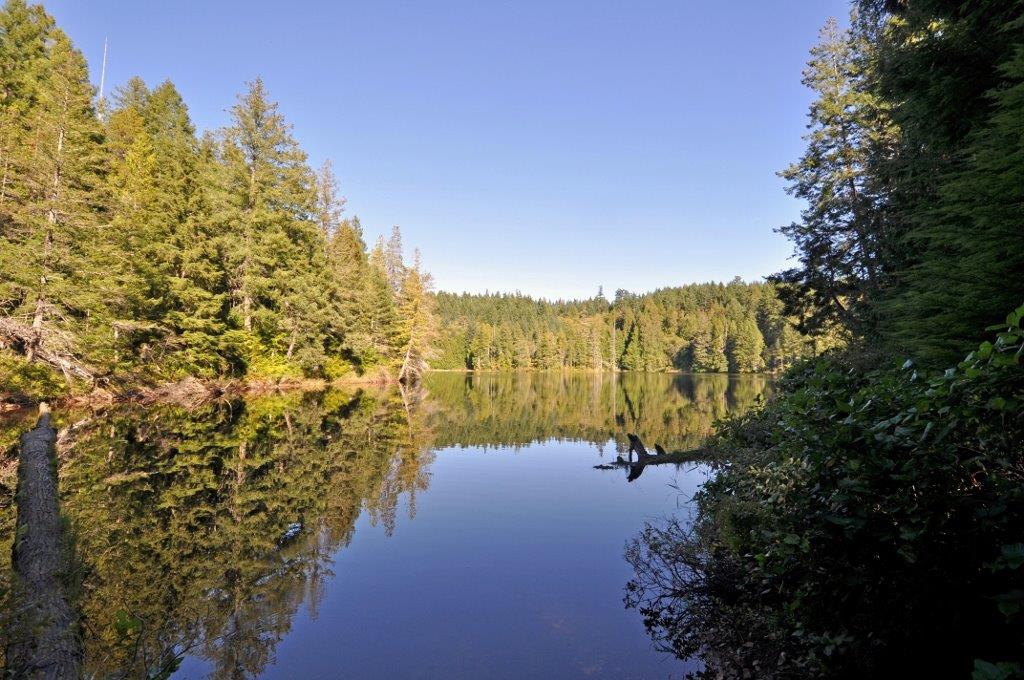 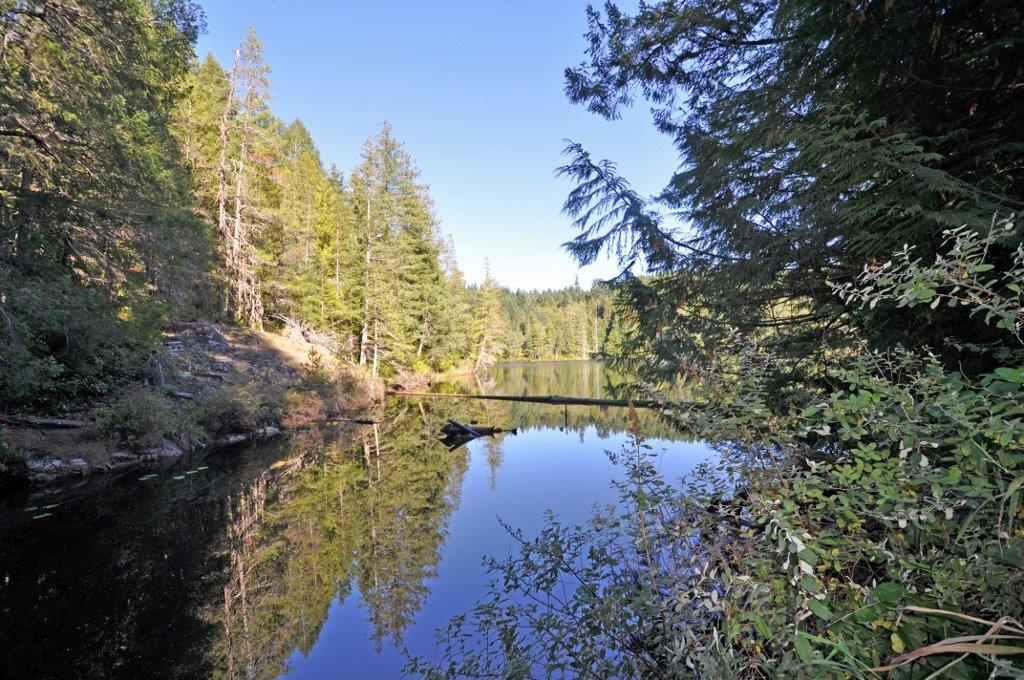 Lund is bursting at the seams and the market needs the development of more housing. This truly is a unique opportunity for a comprehensive development in one of the most incredibly beautiful and vibrant places in all of British Columbia.

Community water and sewer run along two of the property's boundary lines and the property fronts onto Highway 101 and Finn Bay Road. Partial views of the ocean and Lund Harbour can be seen from the property and there is a considerable amount of frontage on Thulin Lake, which is the source for the community water system. Most of the land is gentle in nature with mature timber and there is a gravel road network.

This property is located on the supernatural Sunshine Coast of British Columbia within the historic community of Lund, 17 miles north of Powell River. Lund is situated at the gateway to world renowned Desolation Sound Provincial Marine Park and Savary Island, known as the Hawaii of the north for its miles of white sandy beaches.

Alberta visitors can travel via West Jet from Calgary to Comox-Courtenay and take a ferry directly to downtown Powell River. From Powell River the property is a scenic 25-minute drive north along Highway 101.

Just around the corner (8,256 hectares) is British Columbia’s largest marine park. It includes more than 60 km of shoreline, several offshore islands and a gradually rising upland that contains a number of lakes, waterways and waterfalls. Unwin Lake, a 173 hectare body of fresh water, is the park's largest lake. Set back to the north and east, Coast Mountains soar to more than 2,400 metres. The warm waters surrounding the area teem with sea life. Ideal for swimming, scuba diving and feasting on your catch of the day, salmon, cod, prawns, crab, clams and oysters. Plenty other tasty morsels lie beneath on the oceans floor. To acquire them, you must put on your scuba gear and get a little wet.

Lakes
Enjoy easy road access to the many lakes and rivers. The area boasts more than 50 fresh water lakes surrounded by thousands of hectares of pristine coastal forests. Inland Lake is known for its level, 14 km trail which can accommodate wheelchairs and strollers. You may prefer a day of paddling the calm, clear waters of a peaceful lake, or you can take on the challenge of a 35 miles (57 kilometre) canoe route, which includes 8 lakes and 5 portages. Dinner is fresh and never far away as the region's lakes teem with trout and, at certain times of the year steelhead salmon!

The 106 miles (170 kilometre) Sunshine Coast Trail accommodates everyone from day hikers to ultra-marathoners. Easy to get to with more than twenty access points along the way, hikers are rewarded with abundant wildlife, gorgeous lookout points and stunning westerly views of the Strait of Georgia and its emerald islands. The trail is extremely well maintained and hikers can take advantage of camping facilities and lodging located along the route.

During the spring and summer months, take advantage of guided hikes or let the local hiking club introduce you to some of the region’s most popular wilderness trails. Maps and detailed information regarding hiking routes and activities are available 20 minutes away at the Powell River Visitor Centre.

Known internationally as the "Dive Capital of Canada" the Upper Sunshine Coast was rated by Rodales Dive Magazine as the “#1 Best Overall Dive Destination in the World" for 2006. A predator-free dive habitat, the coastal waters boast a visibility range of up to 30 metres (98 feet). Especially clear waters during the winter months make for excellent viewing of the area’s wolf eel and giant octopus. One of the area’s leading diving attractions is located in the waters in front of Saltery Bay Provincial Park. The Emerald Princess, a 2.5 metre (8 foot) bronze statue of a mermaid located in 18 metres (59 feet) of water attracts dive enthusiasts from around the world. Other dive sites include several wrecks, the Okeover Caves and numerous coastal boat dives which highlight the diverse and colorful underwater world of the BC coast.

Powell River is a gateway to many destinations in the surrounding area including Texada Island, Desolation Sound and Savary Island.

The Sunshine Coast is truly a fishing mecca. Fish for cod or salmon in front of your ocean view acreage and grill your catch on the barbecue that evening. Whether you are reeling in a salmon or jigging for cod, fly fishing for cutthroat, rainbow trout and steelhead salmon or trolling for kokanee in one of the region’s spectacular lakes, you will not be disappointed! This pristine ocean waterfront sanctuary offers up prawns a mere 300 feet off shore. Crab, clams mussels and oysters are also abundant in the area.

BC's west coast abounds with wildlife. While relaxing in this pristine natural environment you may glimpse a great blue heron stalking its morning catch along the shoreline, observe a playful otter family darting in and out of tidal rocks, or watch deer wandering through an open meadow. Eagles and ospreys soar on the warm ocean breezes; below porpoises, killer whales or grey whales might break the surface of the water as they traverse the coast. Seals and sea lions are seen on a regular basis.

The region is known for its exceptional bird watching. Loons, mergansers, wood ducks and harlequins are but a few of the waterfowl that make their home along the coast. In the spring tiny ruby red rufous hummingbirds dart from flower to flower; great owls watch silently in the forest, and in the fall pale chevrons of snow geese move across the sky, heading south for the winter. Nature, pure and unspoiled, awaits you.

Savary Island is located within close proximity and is renowned for its miles of white sandy beaches. The island itself is largely composed of sand. Savary is about five miles long and averages half a mile wide. Low-lying Savary is ideally situated in the rain shadow between Vancouver Island and the Coastal Mountains.

The tides moving from the north and south of Georgia Strait meet just north of Savary. The southern tide is warm and the waters move less. This results in generally warmer seas. This water flows over Savary's sun baked sandy shelf producing the warmest water north of Mexico.

A 25-minute drive from your base camp to adventure is the ferry terminal to Texada Island. The island offers spectacular beaches, fine dining, superb arts and crafts gallery located just around the corner from the ferry terminal, and hours of swimming delight in the crystal clear aquamarine waters of the abandoned limestone quarries. Load the car up with kayaks and bikes, or simply walk onto the ferry. Head for the beaches and trails at Shelter Point Provincial Park and don’t miss a walk on Gillies Bay, famous for its Sandcastle Festival in early August.

Make your way to Okeover Arm Provincial Park, the oyster capital of Canada. Okeover is a 10-minute drive from base camp to adventure. Hand pick beautiful oysters on the beach or just sit back and marvel at the sunset while you dine on the catch-of-the-day at one of the region's finest restaurants, The Laughing Oyster.

Lund is a quiet village about 17 miles north of Powell River and the physical ending (or, as argued by locals, the "starting") point of Highway 101, which stretches to Chile, South America. The Historic Lund Hotel symbolizes the heart of Lund, and to marine traffic it is the symbolic gateway to beautiful Desolation Sound Marine Park.

The area that is now Lund has been known to the Coast Salish peoples for thousands of years was a village site of the Sliammon people. The village of Klah ah men was home to dozens of families and a desirable location as it was accessible by land and sea so approaching visitors could be detected from afar.

Further, both I hohs (Savary Island) and Tohk natch (Okeover Inlet), plentiful in shellfish, salmon and land mammals, were only short paddles away. Fresh water was ample as were cedar trees, the main material source in the production of tools, shelter, clothing and more. Ceremonies, both spiritual and social in nature, were held at Klah ah men, and included dance, song and recreational games that were a major part of Coast Salish culture.

In 1889 Fred and Charlie Thulin arrived from Sweden, looking for a better life in the new "land of opportunity." The brothers first set eyes upon the area that would later become Lund while sailing by on the side-wheeler tugboat Mermaid on their way to find employment logging in Pendrell Sound. Shortly thereafter Fred and Charlie settled in the area they named Lund, after the University town of the same name in their native Sweden, immediately building a wharf, logging the bay, piping in water and converting suitable land on the settlement to farm land.

In 1892 a post office was established, one of only two north of Vancouver at the time. A general store was constructed and shortly thereafter the first passenger and mail boat began making regular stops at Lund, tying it to the world. By 1895 the brothers had built Lund’s first hotel, which held both the first hotel licence and the first liquor licence to be issued north of Vancouver. A bottle of the best scotch was available for $1.50 and the basement of the hotel housed a jail cell, primarily used to “accommodate” any drunken rowdies patronizing the hotel. By 1905 the Thulins had purchased the first donkey engine seen up the coast, built their first steamboat "City of Lund" and expanded their chain of stores to Sliammon Village and to where present day town site is. As coastal traffic continued to increase in 1905 the Thulins began construction of a second hotel, The Malaspina, which in 1918 was renamed the Lund Hotel after the original building was destroyed by fire.

In November 1999 the Sliammon First Nation and a local businessman purchased the property and commenced extensive renovations, reopening the doors in the spring of 2000. Although further improvements and expansion are planned, the hotel currently boasts 27 well-appointed guest rooms and the new pub and restaurant feature un-obscured ocean views as well as spectacular menus. During the warmer months guests may dine on the spacious waterfront decks, savoring the ocean breeze and the bustling activity of Lund Harbour. Historic photos grace the walls of the entire hotel, telling the story of the hotel and Lund as only those immortalized by the camera could truly tell it.

111 acres within the community of Lund with tremendous potential for a comprehensive residential development.

Additional zoning information can be found on the Qathet Regional District website. 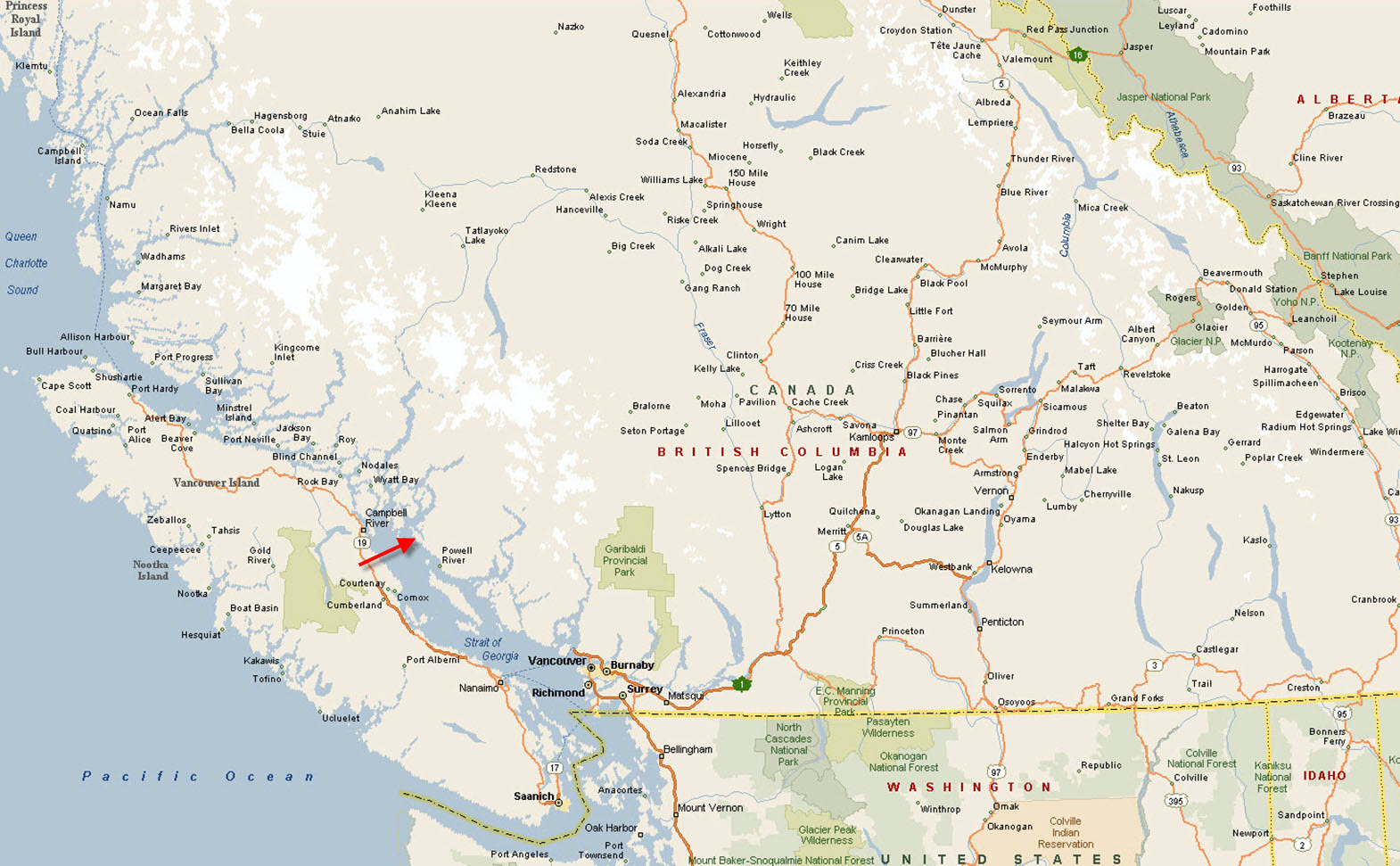 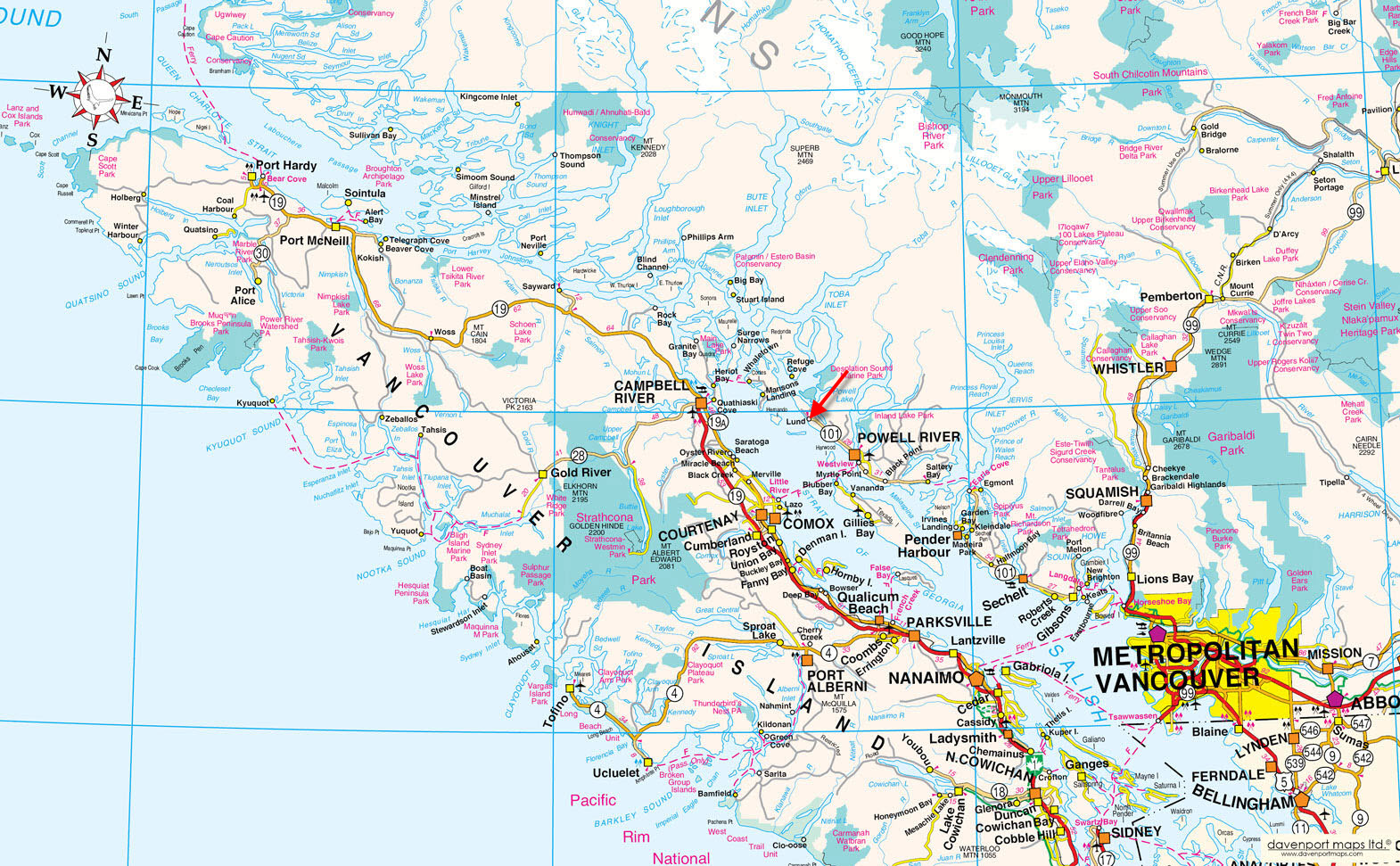 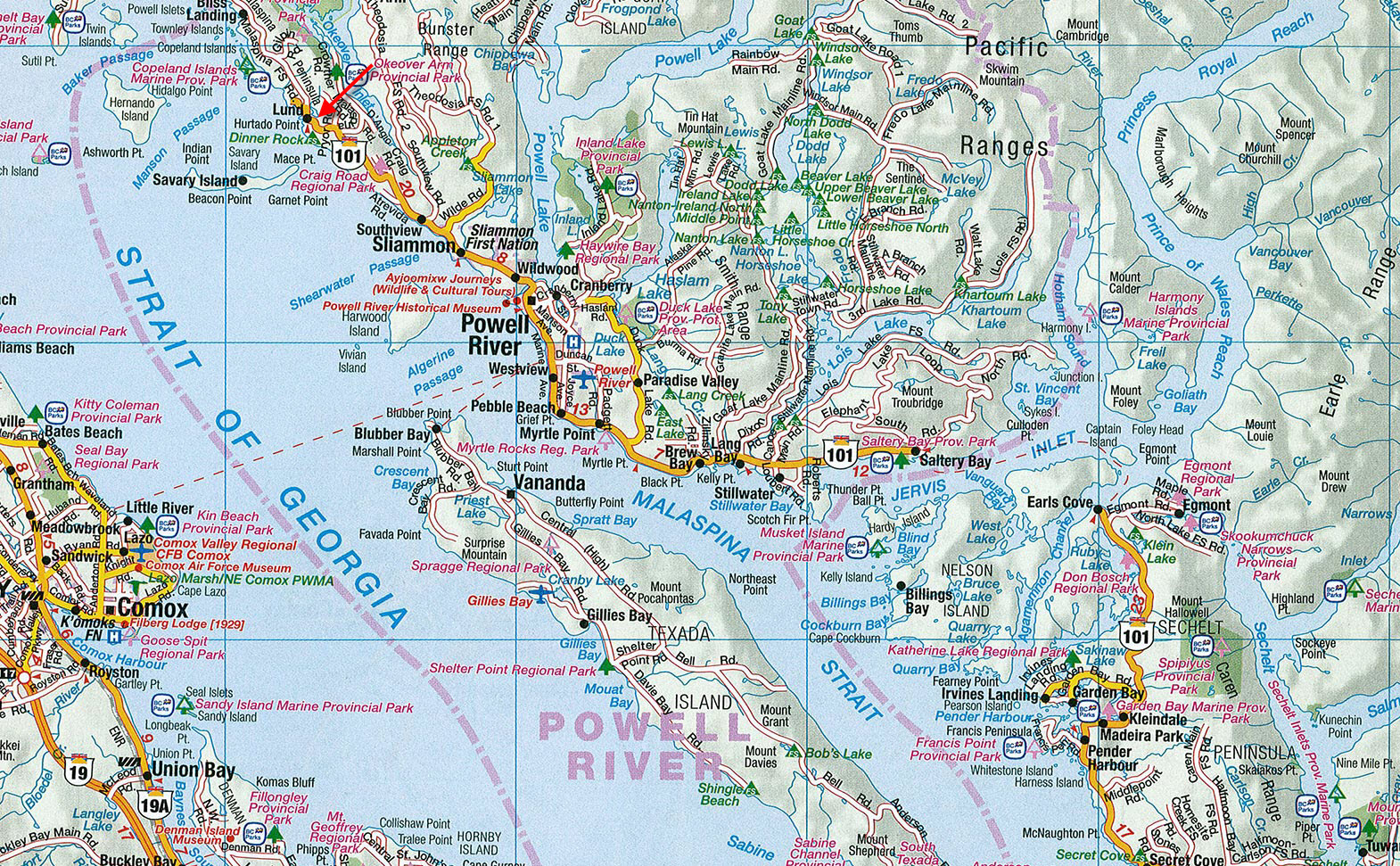 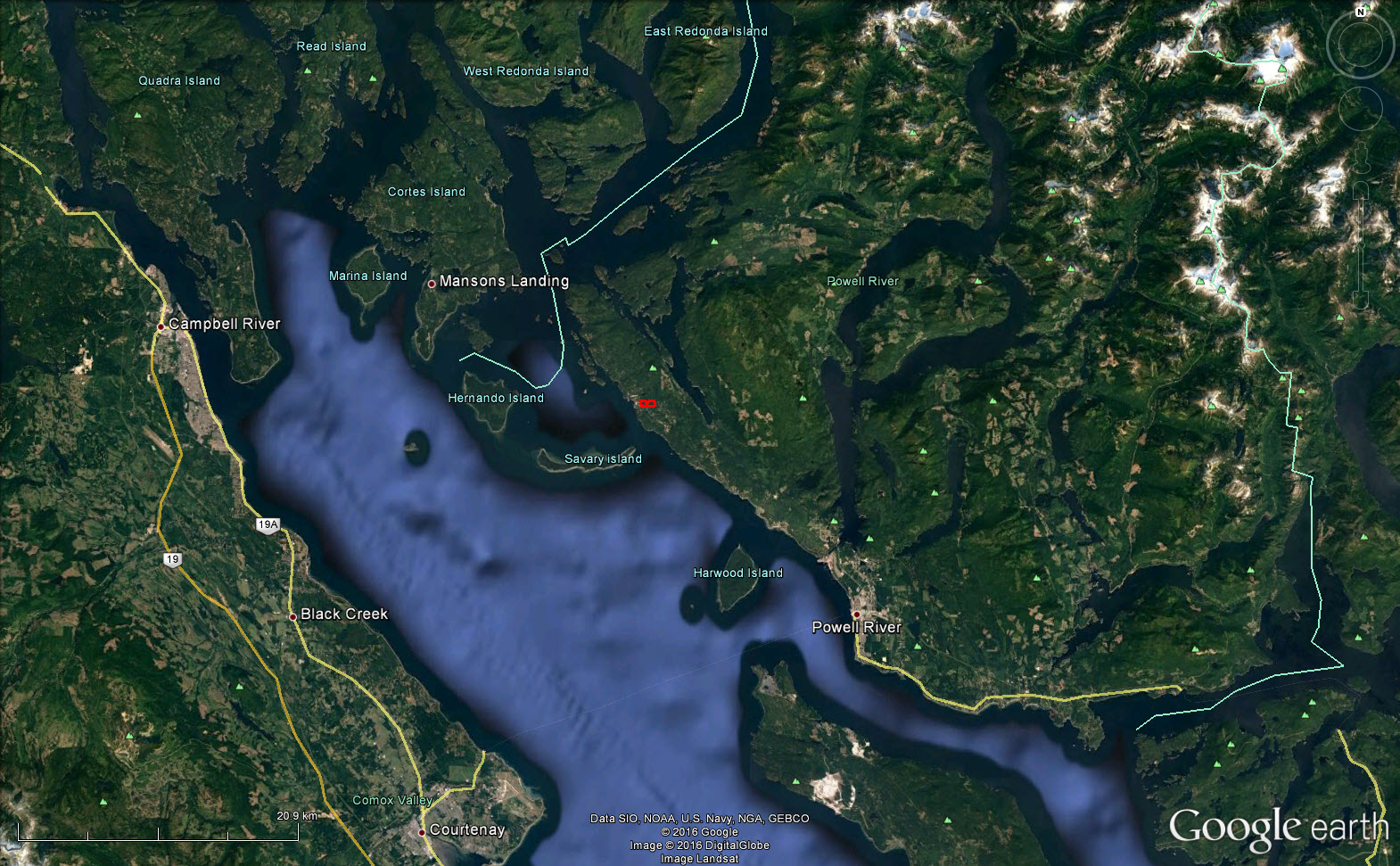 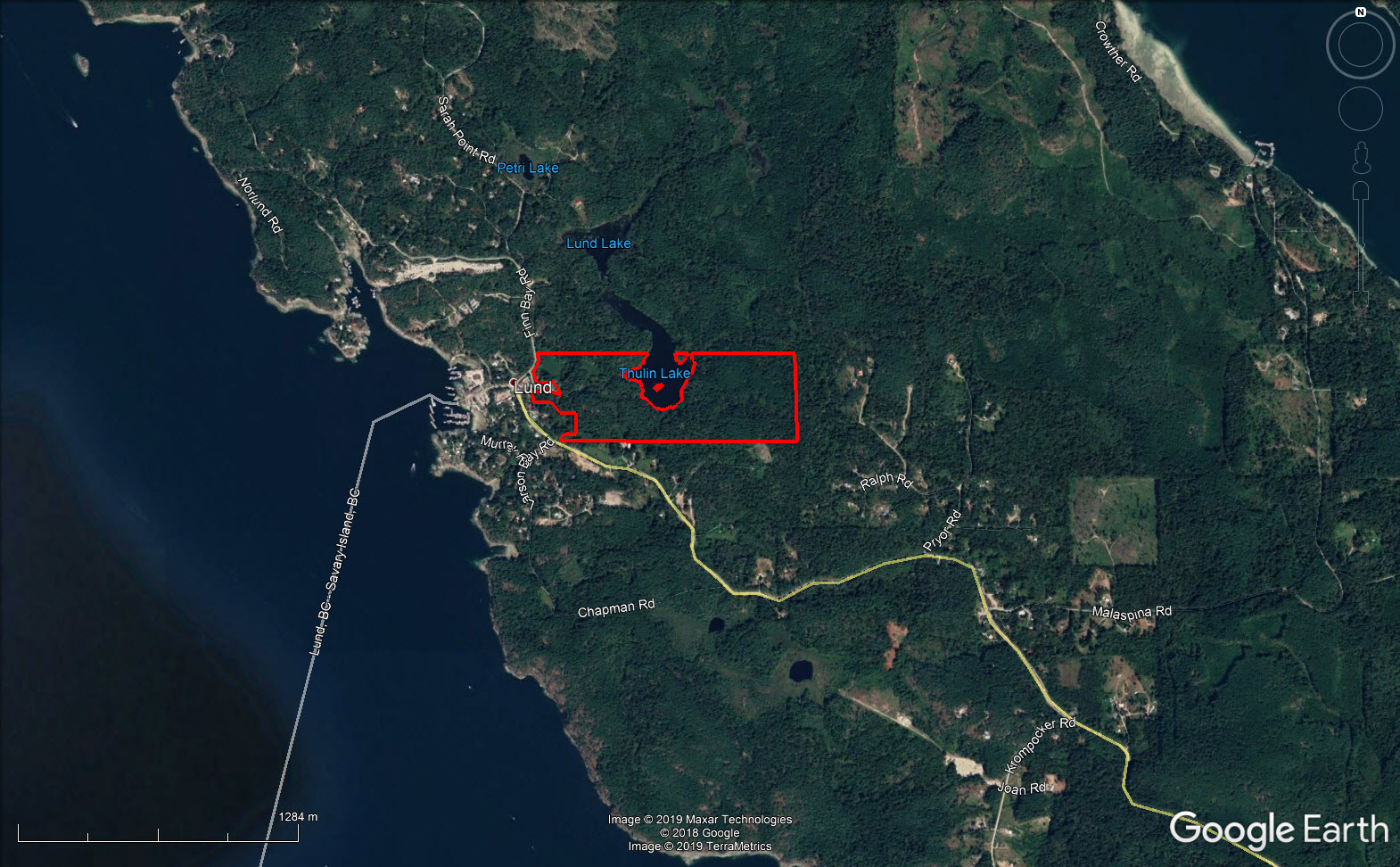 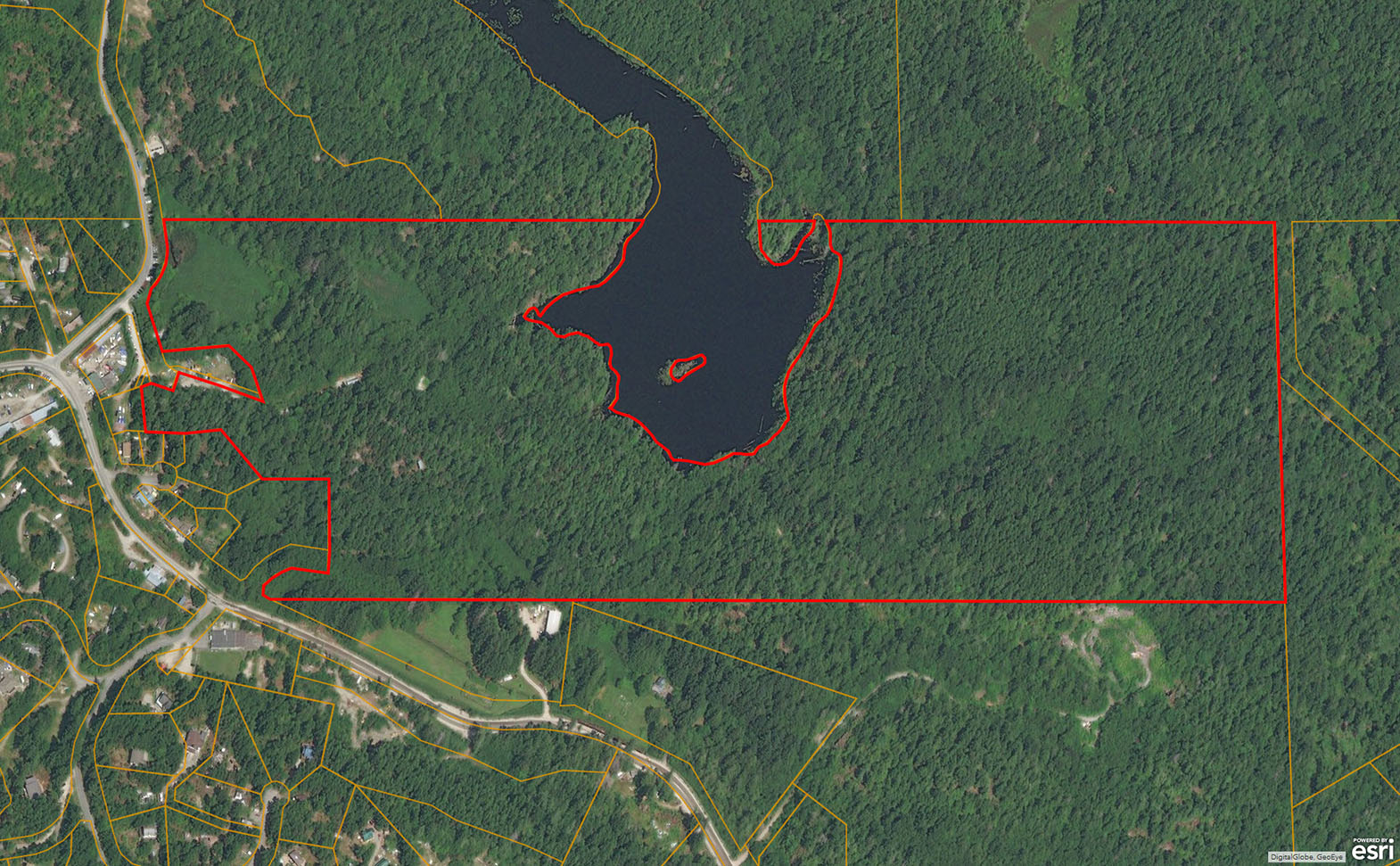 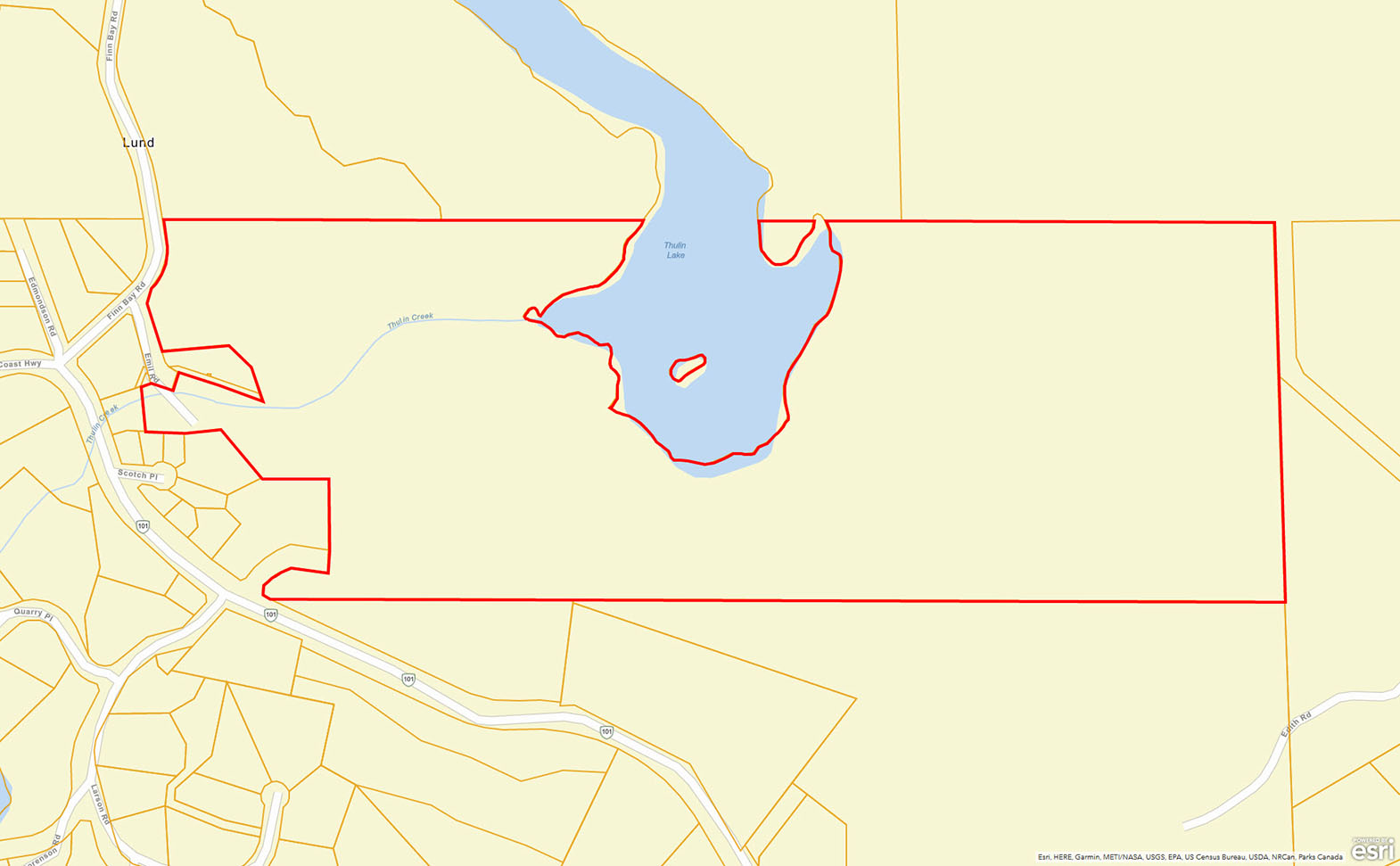 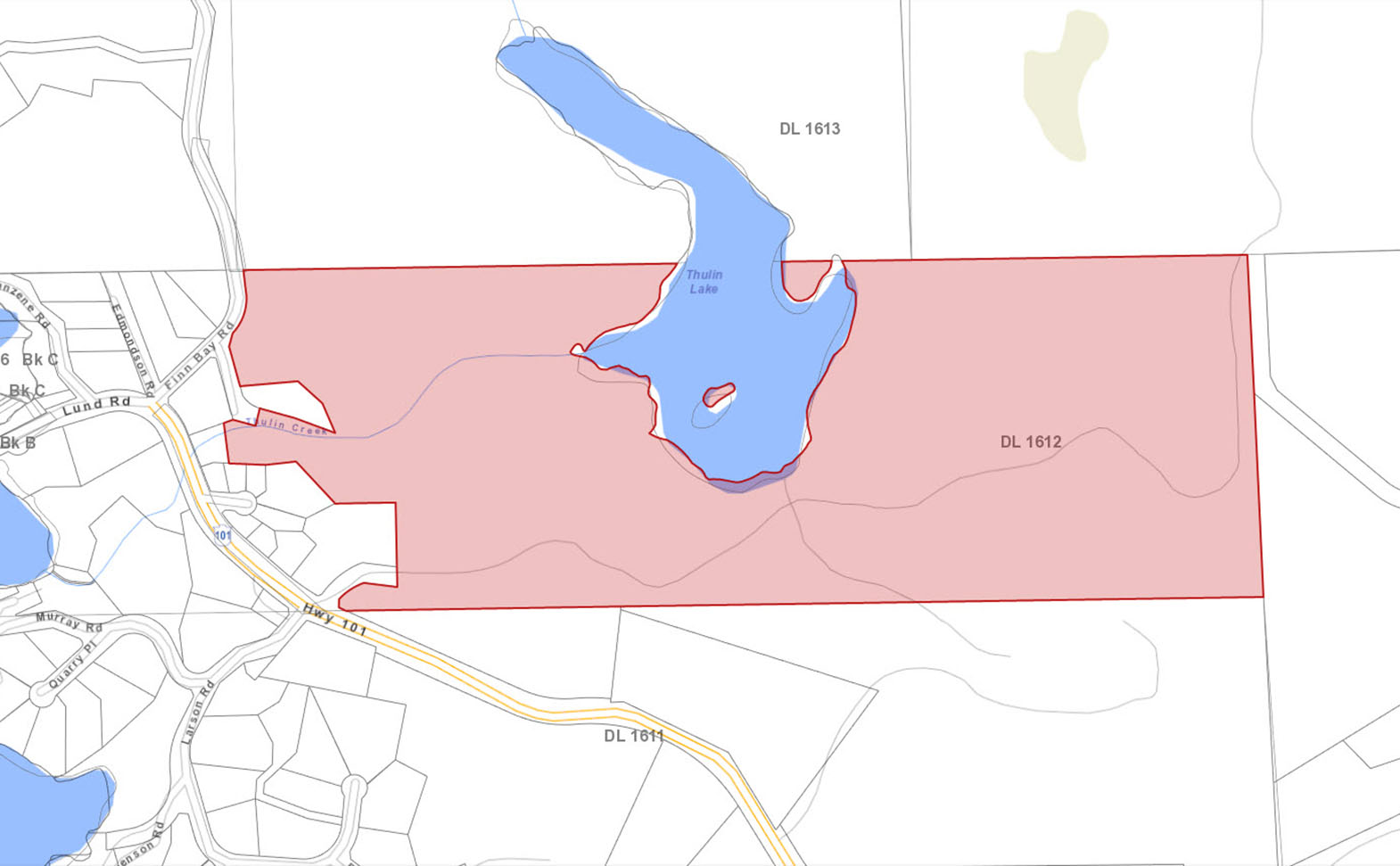