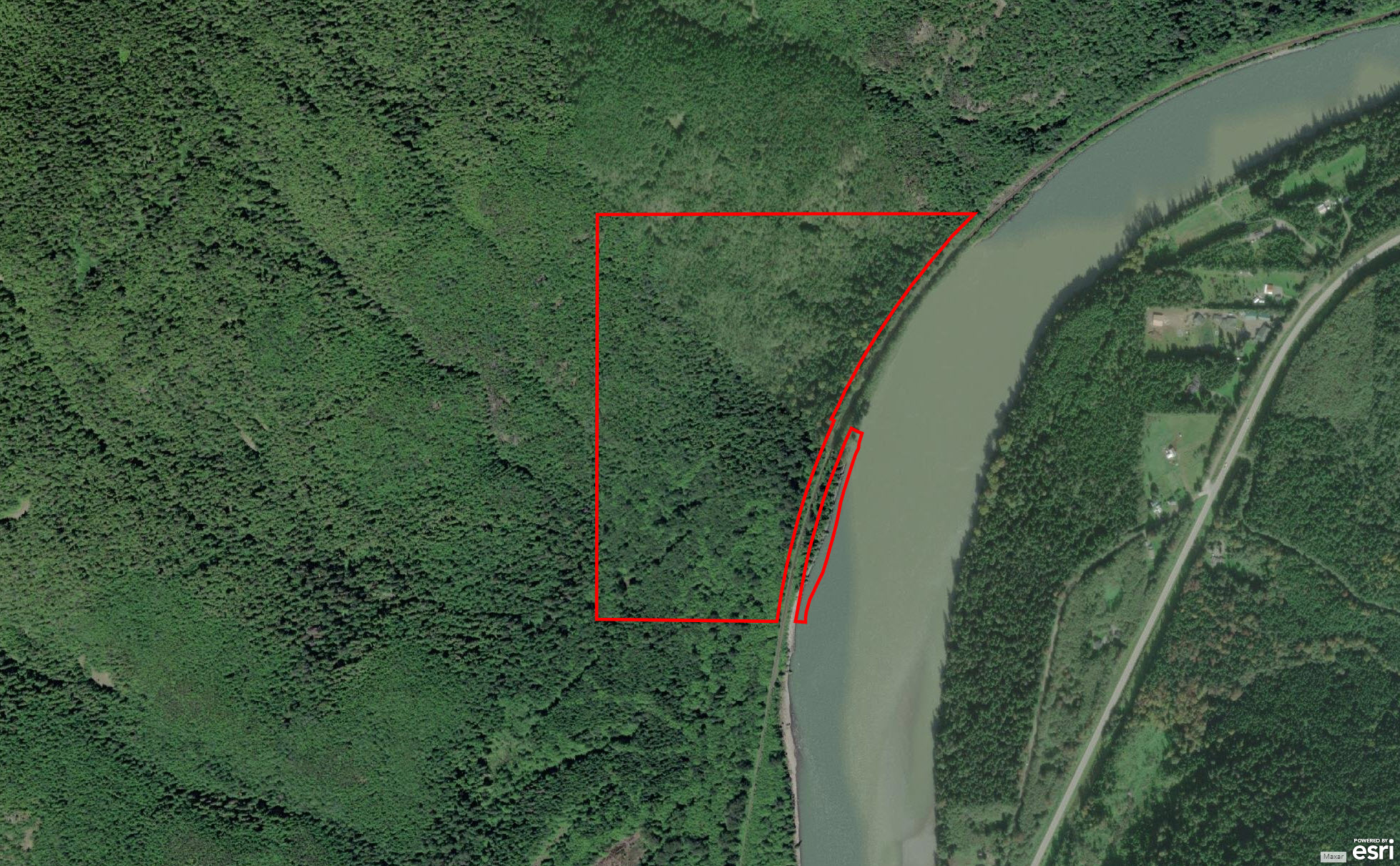 North Coast & Northwestern BC Listing No. 22113

92.35 acres 2 km north of Usk. 25 km north of Terrace, BC. Difficult access! Only legal access is by water or walking 2 km along the railroad tracks. 1,200 feet on the Skeena River. Timber including approx. 2,000 m³ of Cedar. Perfect for self-sufficient off grid living 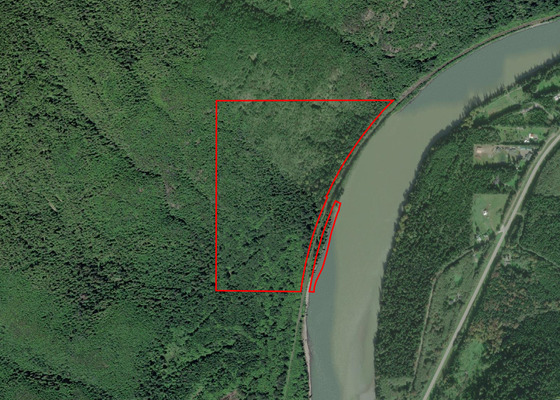 This 92.35 acre property is located 2 km north of the small community of Usk, BC. This property is challenging to access, with the only legal access currently being by water on the Skeena River or alternatively. One can park their vehicle at Usk and then walk 2 km along the railroad tracks to access the parcel. The property is approximately 25 km north of Terrace, BC which is the regional retail and service hub for the northwestern portion of British Columbia. The property has a rural residential zoning allows for single-family residential uses, including out buildings and home occupations. This is a spectacularly beautiful piece of BC’s backcountry.

This parcel has over 1,200 feet of waterfront on the world-renowned Skeena River, the waterfront section is a small sliver of land in between the railroad tracks and the river. Please refer to the mapping section of this listing. The Skeena River is the second-longest river entirely within British Columbia and is known around the world for its sport fishing opportunities. The Skeena River draws its name from the Gitxsan word "Ksan" which means "river of the mists." This area held the world-record chinook salmon of 92 and one-half pounds; the record coho salmon which weighed in at 25 and one-half pounds; and a 36-pound steelhead.

Undoubtedly one of the prime selling features for this parcel is the timber. The acreage has several pockets of mature timber including approximately 2,000 m3 of cedar. The only way to get the wood off the property would be by helicopter or to make a deal with two adjacent landowners to the south to bring the logs through their privately owned property. According to the seller there is an older historic access or mining road that runs from Usk north to the property. If someone was looking to build a backcountry hideaway, all someone would need is a portable sawmill and the ambition to create private paradise of their own. This property has the timber, climate and water needed for off-grid living and a self-sufficient lifestyle.

Please call the listing REALTOR® today for more information or to book a time to go by for a look.

Usk is located just off Highway 16 north-east of Terrace on the north banks of the Skeena River.

Please refer to the mapping section of the website for the detailed location.

This property is challenging to access, with the only legal access currently being by water on the Skeena River or alternatively, one can park their vehicle at Usk and then walk 2 km along the railroad tracks to access the parcel.

Terrace is a city located near the Skeena River in British Columbia. The community is the regional retail and service hub for the northwestern portion of British Columbia. With a current population of over 12,000 within municipal boundaries, the city services surrounding communities as well bringing the Greater Terrace Area population to over 18,000 residents. The Kitselas and Kitsumkalum people, tribes of the Tsimshian Nation, have lived in the Terrace area for thousands of years. The individual Indigenous communities neighbour the city with Kitselas to the east and Kitsumkalum to the west.

As northwest British Columbia's main services and transportation hub, Terrace is intersected by the Canadian National Railway as well as Highway 16 (running east to west) and Highway 37 South. Air services are provided at Northwest Regional Airport, with connections to Prince George, Smithers, and Vancouver. The Terrace railway station is served by VIA Rail's Jasper-Prince Rupert train. Health care in Terrace is administered by Northern Health and provided in part by Mills Memorial Hospital.

The Great Bear Rainforest was officially recognized by the Government of British Columbia in February 2016, when it announced an agreement to permanently protect 85% of the old-growth forested area from industrial logging. The forest was admitted to the Queen's Commonwealth Canopy in September of the same year.

It is a small rural community whose European history dates back to 1912 with the building of the right-of-way for the Grand Trunk Pacific Railway. The name Usk is thought to have been derived from one of the railroad engineers working on the project whose birthplace was from near the River Usk near Cardiff in South Wales.

Terrace boasts year-round recreational opportunities for the whole family to enjoy. The choices are endless: world-class fishing on the Skeena River, hiking trips through the backcountry, cycling along city paths, or mountain biking down steep terrain. Go golfing at the base of a majestic mountain, raft down a raging river, or ski exhilarating slopes or along peaceful Nordic trails. Enjoy the largest northern music festival in spring or 10 days of Riverboat Festivities in August. Stop by Heritage Park Museum to partake in a local event or to better understand our history.

Usk was once famous for berry-growing, a flood in the 1930s destroyed most of the community. A few people still live there now. Access is by the Usk Ferry, a reaction ferry, or passenger-only cablecar when the river is iced over. The Usk station is served by Via Rail's Jasper-Prince Rupert train.

The Skeena is the second largest river in the province, and one of the longest un-dammed rivers in the world. Though the Skeena River was valued as an important inland water route, the 288-kilometre trip from coastal Port Essington to Hazelton, at the junction of the Skeena and Bulkley Rivers, was hardly a leisurely cruise. Hudson's Bay canoe brigades, paddling sturdy Haida-built cedar canoes, encountered strong currents, swirling rapids, deep canyons, and sharp bends on their week-long journey to the inland terminus.

Small steamboats appeared briefly on the turbulent river from 1864-1866, hauling supplies for the ill-fated Collins Overland Telegraph. When a transatlantic cable put an end to the ambitious North America-to-Siberia project, the steamboats were retired.

Fifteen years later, in 1891, the Hudson's Bay Company launched a specially commissioned Skeena sternwheeler known as the Caledonia. At 100 feet in length, she was judged too short to handle well, and was returned to the Victoria shipyards to be lengthened. During the next two decades the Company operated a succession of sternwheelers between Port Essington and Hazelton, often competing fiercely with private entrepreneurs such as Robert Cunningham, who launched the Hazelton in 1901. Skeena river boating had become a lucrative business, serving the traders, prospectors, merchants, and missionaries that briefly transformed Hazelton into the largest community in north-western British Columbia.

The Skeena's steam boating era was dominated by two enduring themes: the race for time to complete the upriver trip, and the adaptation of ship design to the rigors of the river. To the amusement of onlookers, bitter rivalry between sternwheeler captains led to frequent river tantrums, including the 1902 ramming of the HBC's Mount Royal by Cunningham's Hazelton. But no matter what the skill of the riverboat crews, a steamboat trip up the river took several days and involved considerable risk. At Kitselas Canyon, near present-day Terrace, shore-anchored cables were required to draw the boats through the perilous gorge. Six crew members drowned at the Canyon in 1907 while trying to free the wind-blown Mount Royal from the rocks at Ring Bolt Island.

The final chapter of Skeena steam boating paralleled the building of the Grand Trunk Railway early in the 20th Century. Construction supplies for the railroad were carried up the Skeena by several privately-owned steamships. In 1912, the Inlander made the last of the Skeena steamboat runs, guided by the captain who first steered the Caledonia up the river in 1891.

A man with a "Little" vision and big dreams arrived in the Skeena River valley in March 1905 by snowshoeing through gruelling deep snow along the Kitimat Trail. George Little liked what he saw and knew that this land was indeed the land that he was searching for when he left his native Ontario. His keen interest and faith in Terrace were contagious and soon gave way to a flood of pioneer settlers, eventually, resulting in a thriving city that respects the man who founded Terrace and recognized the potential of the Skeena Valley.

Fitting nicely into his vision of Terrace, George Little donated 47 acres to the Grand Trunk Pacific Railway. The station stop was originally named "Littleton"; however, as there was already a Littleton in New Brunswick, Little changed the name to "Terrace" in reference to the local geography. Little established a sawmill to accommodate the demand for railway ties. In 1955, Little rode the first C.N.R. train to Kitimat passing over the same route he had trekked one half century earlier.

The flat mountain ranges surrounding Terrace are traditionally called Ganeeks Laxha, which in the Tsimshian language means the "Stairway to Heaven." 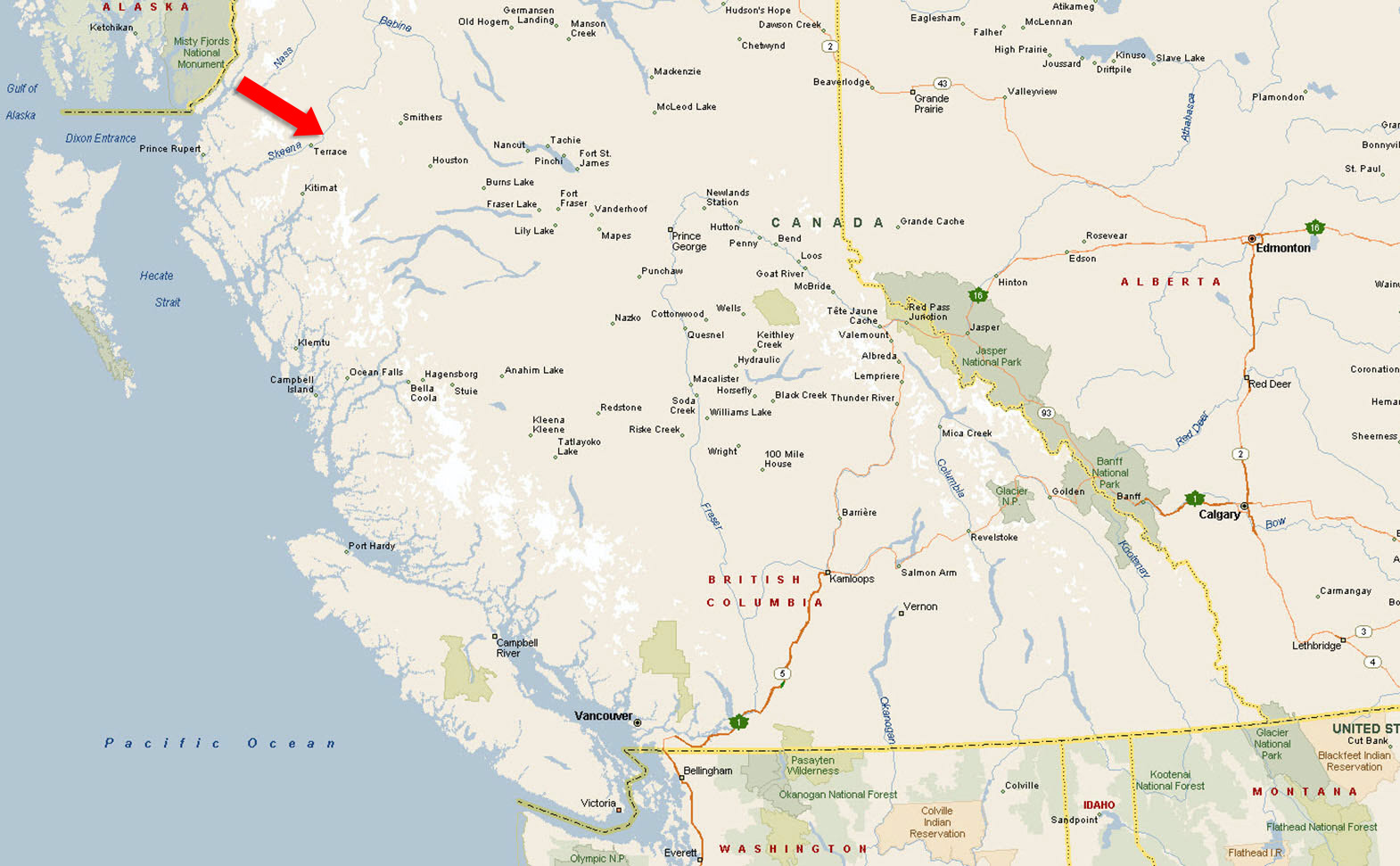 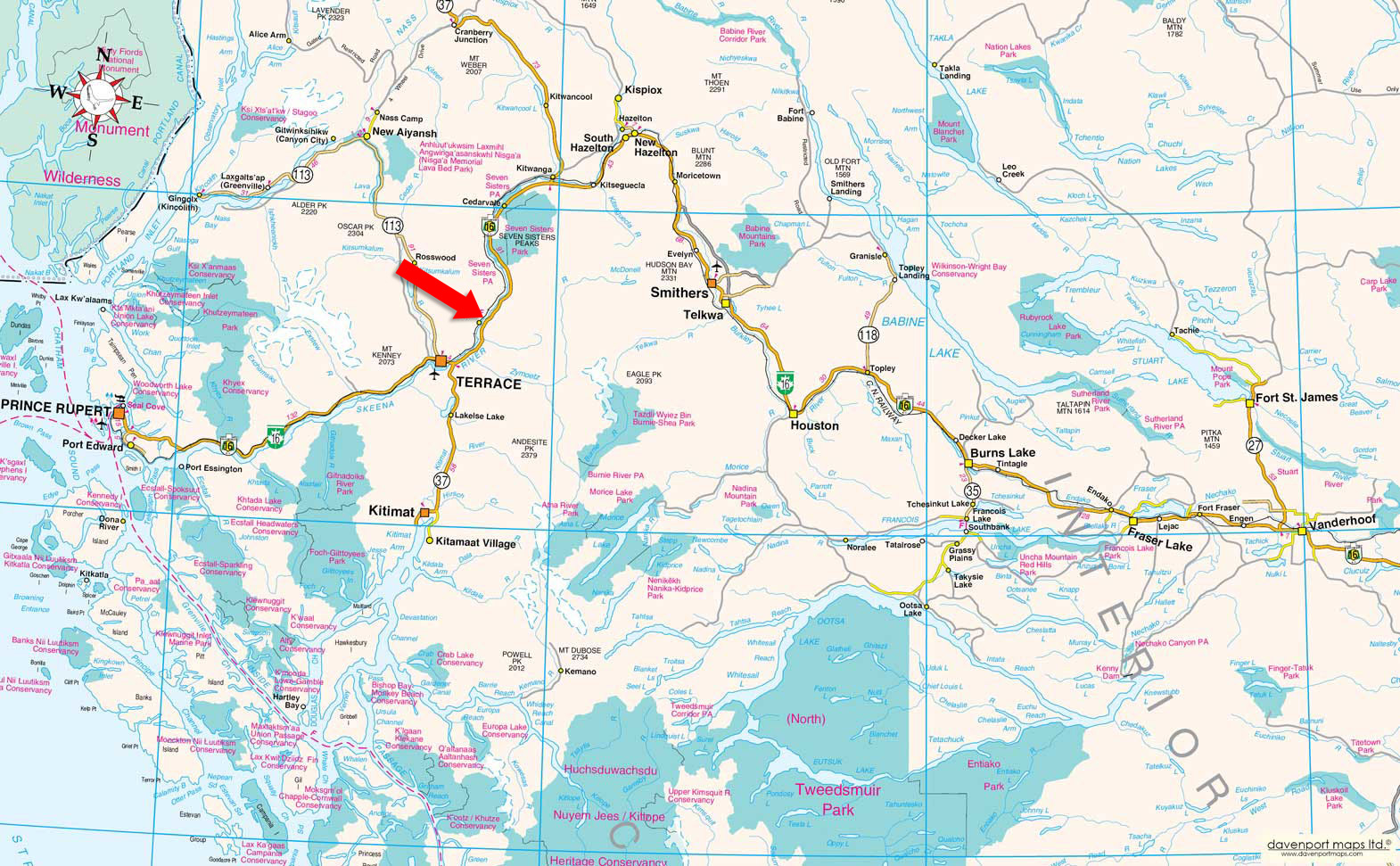 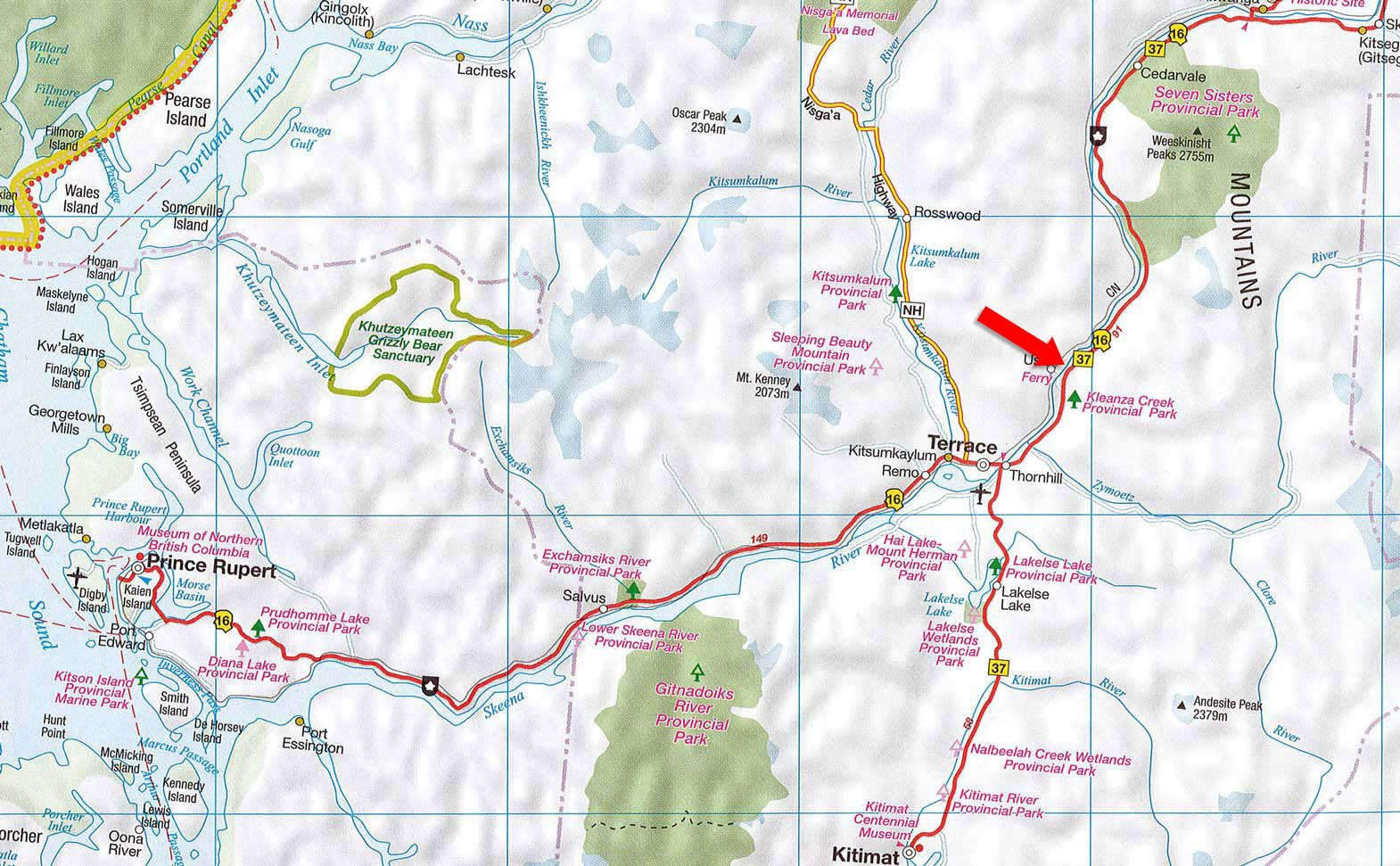 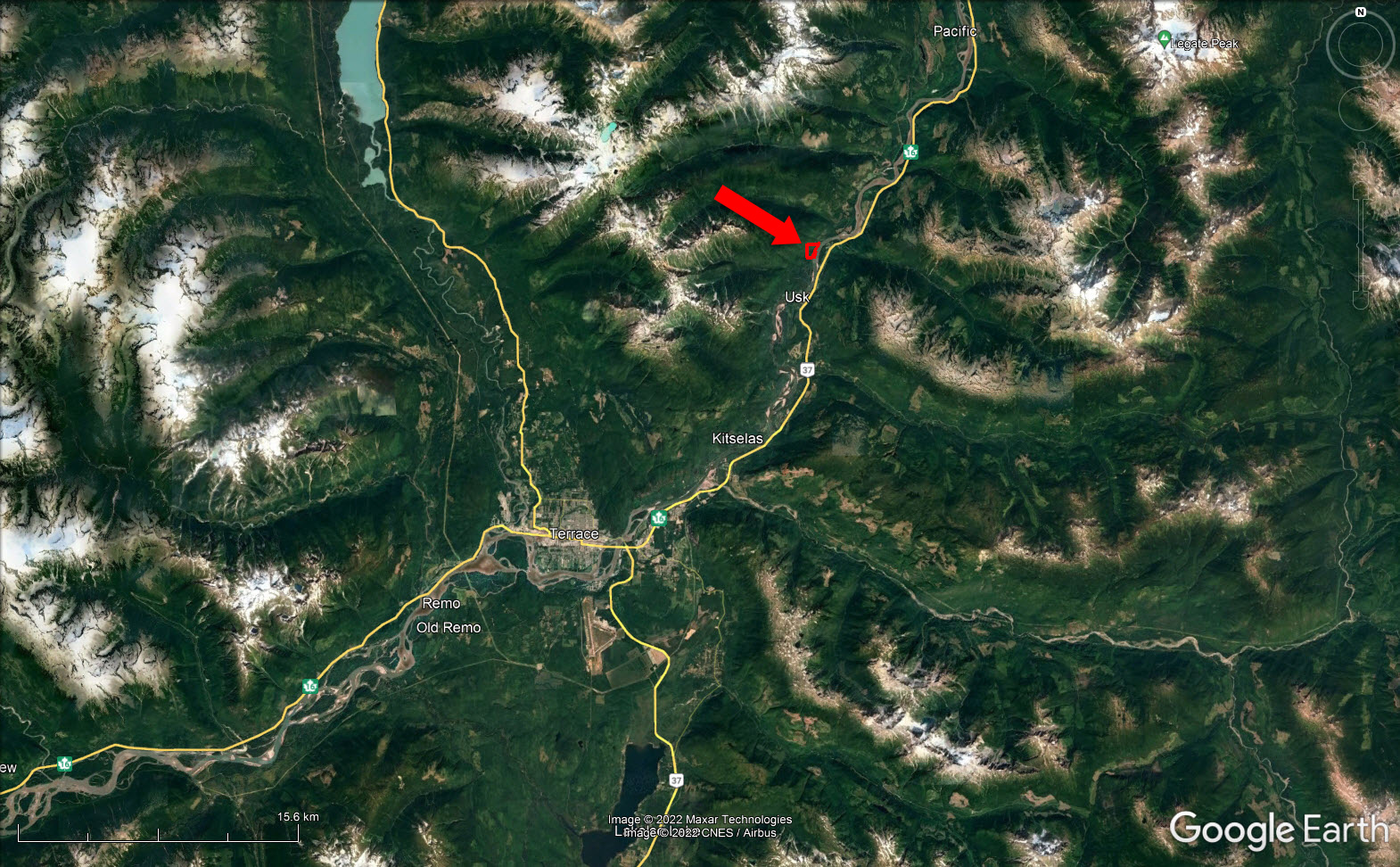 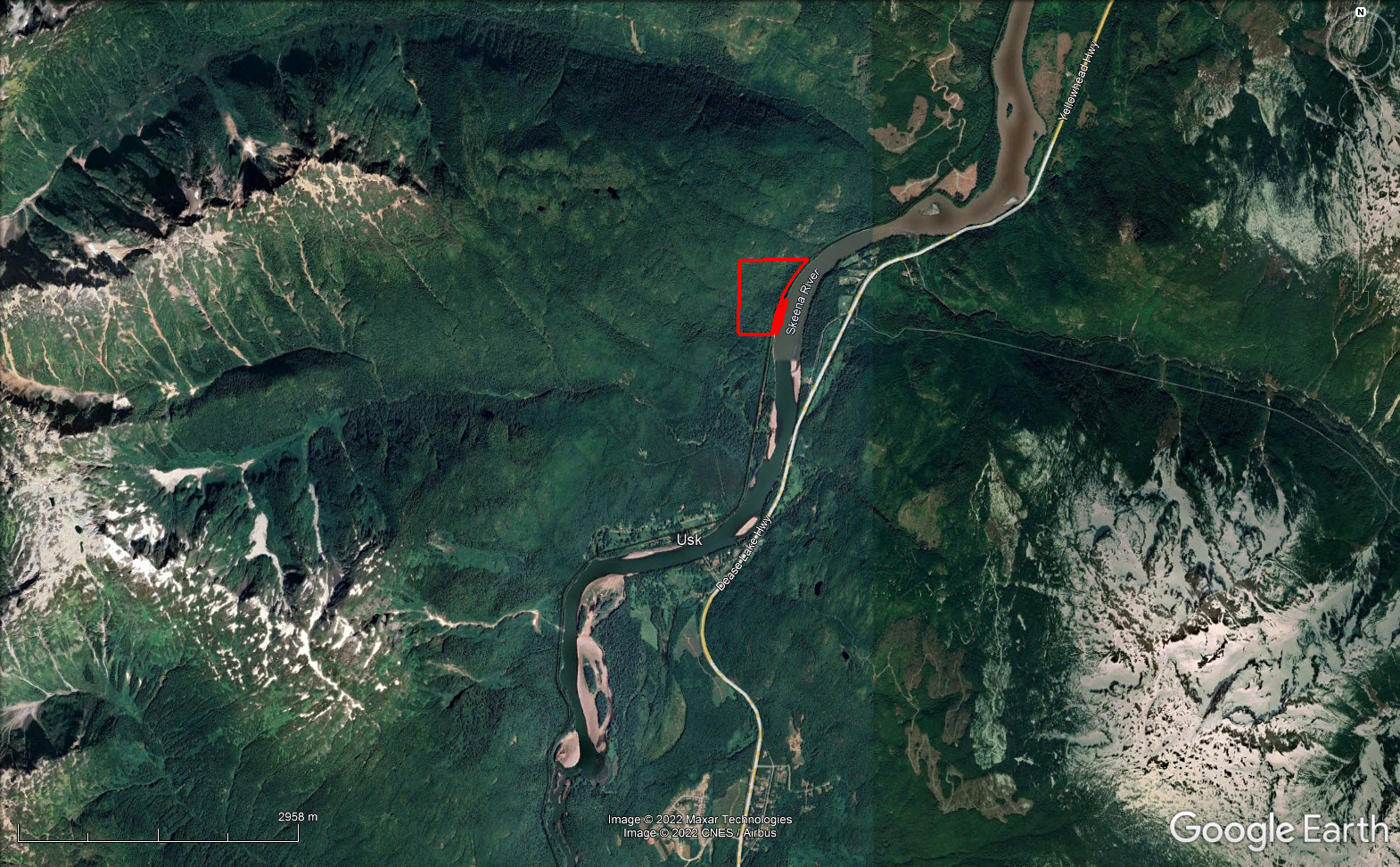 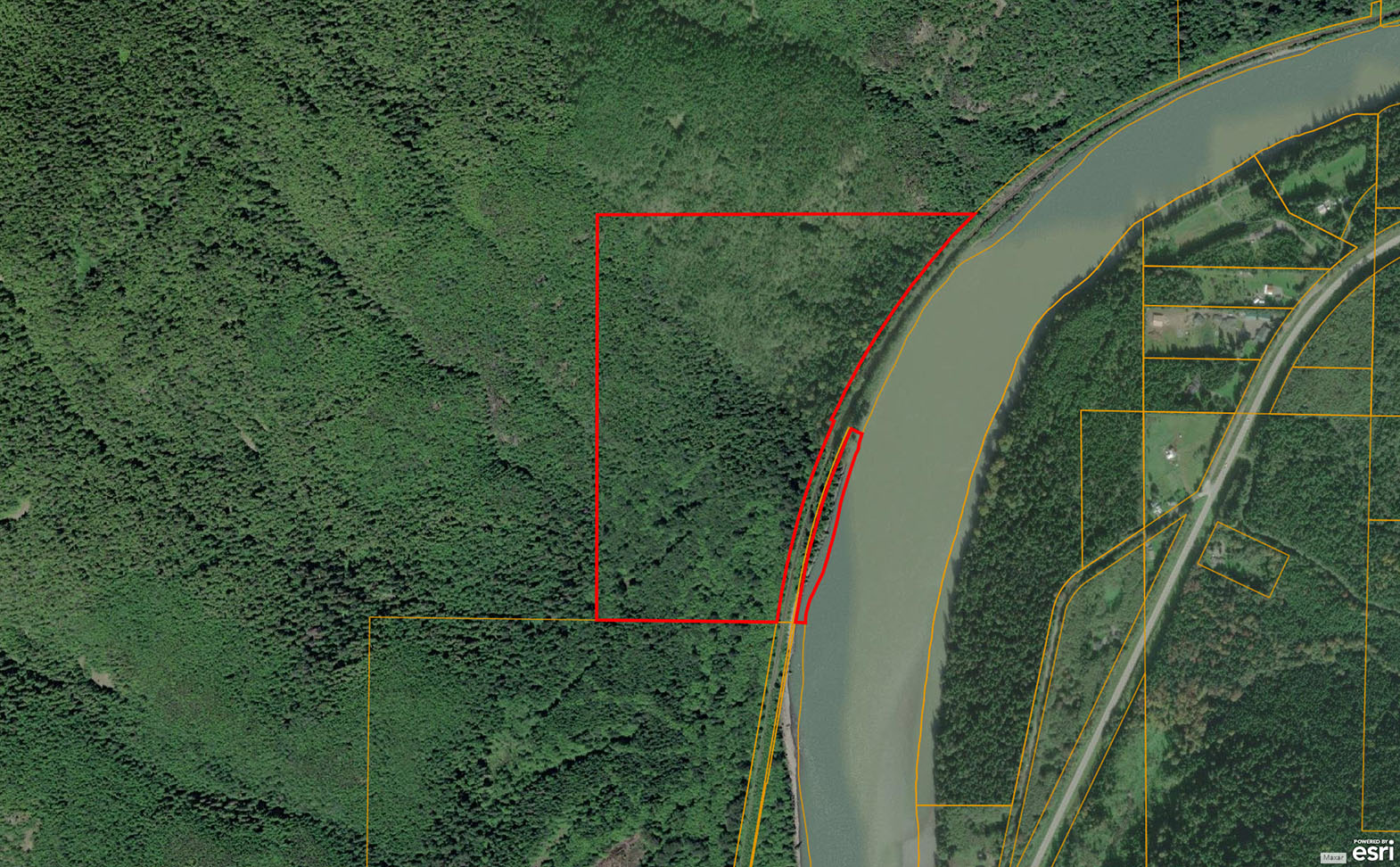 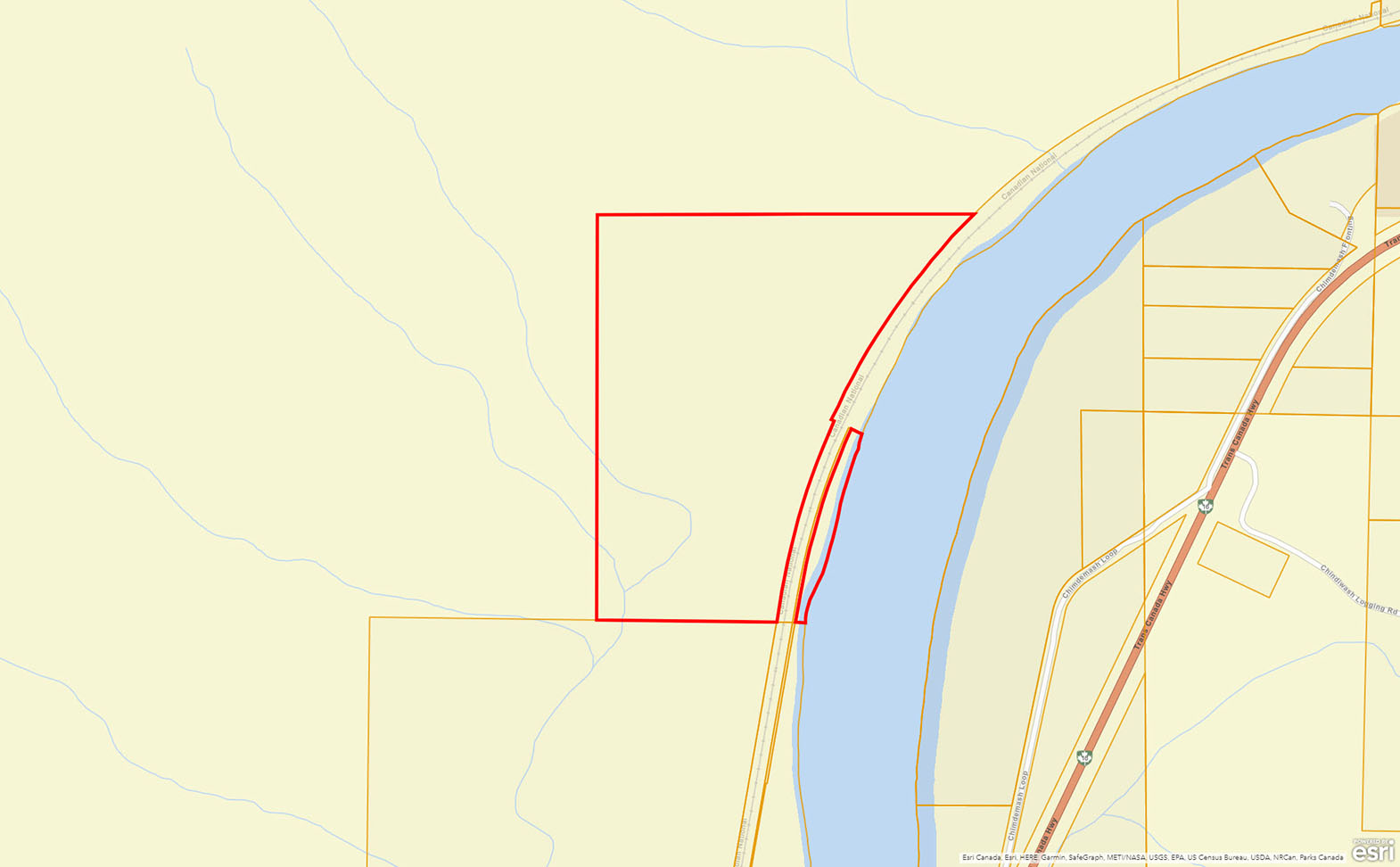 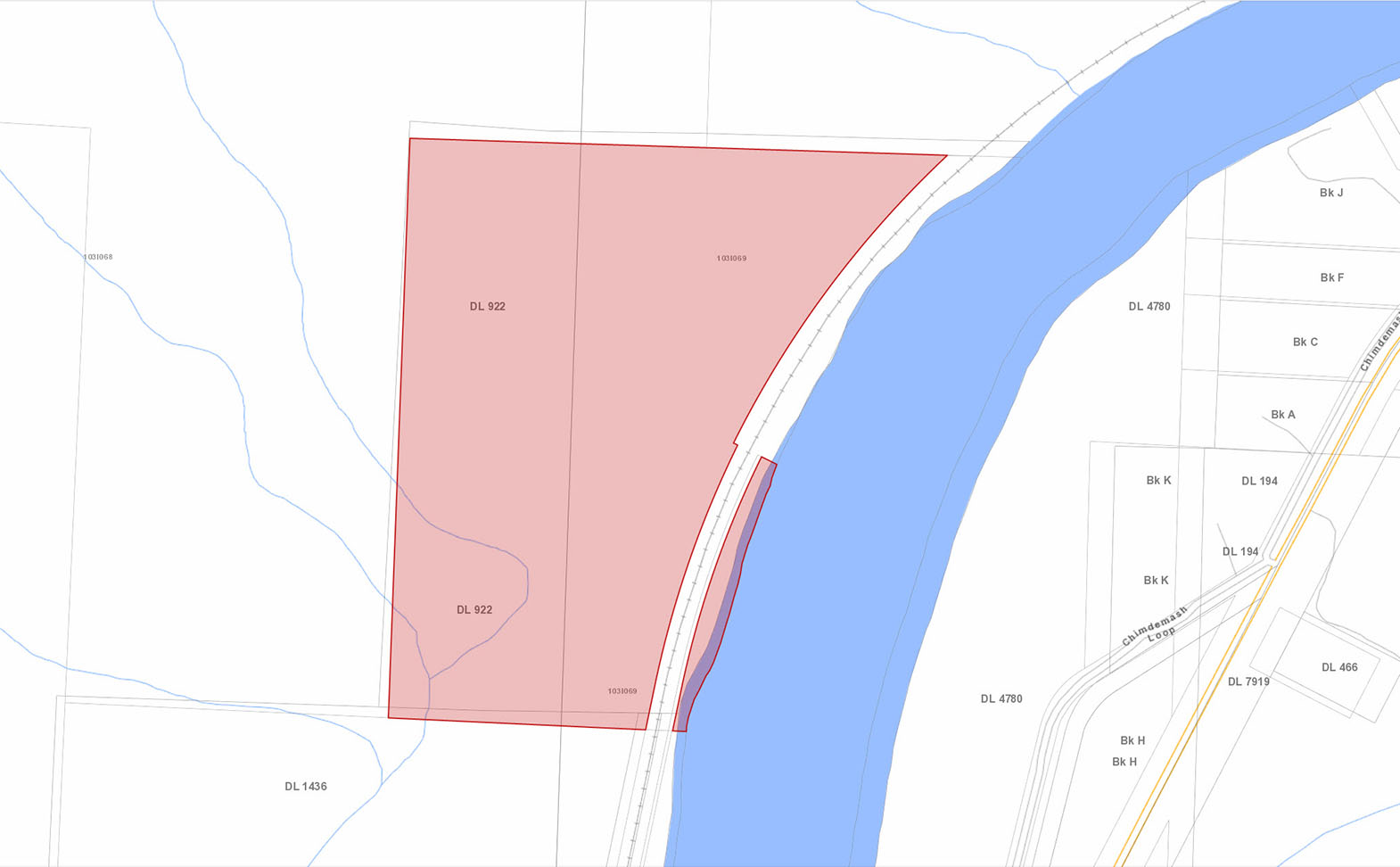