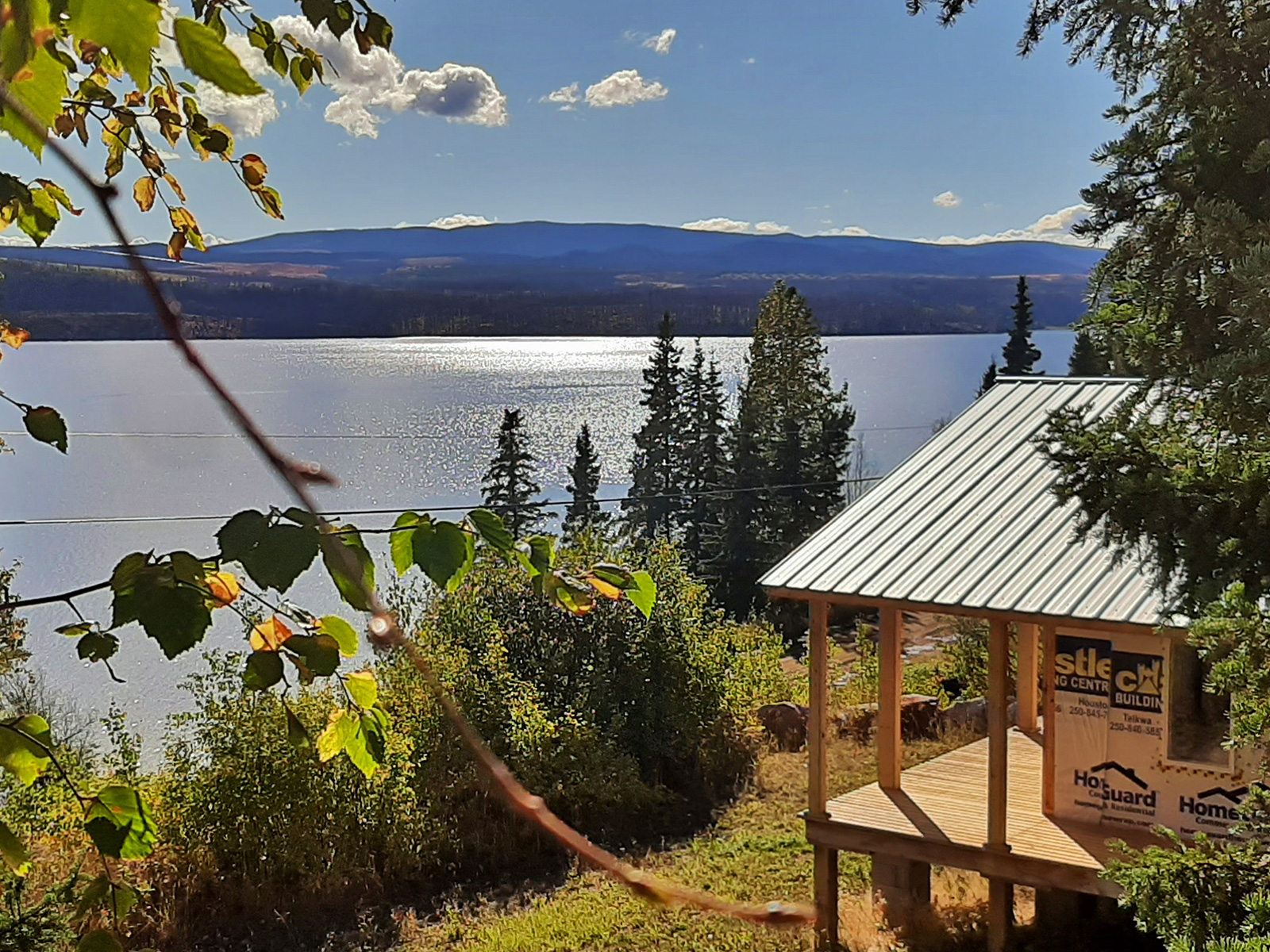 20 acres with 100 ft of waterfront on dazzling Francois Lake. Epic views of sweeping countryside. Easy access to fishing and watersports. Gently sloped with treed and meadow areas. 720 ft2 cabin with wrap-around deck is finished to lockup. 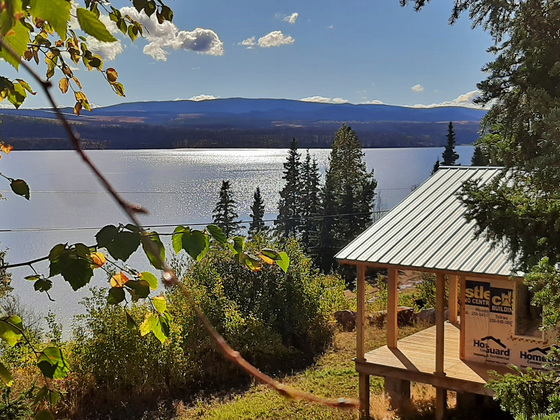 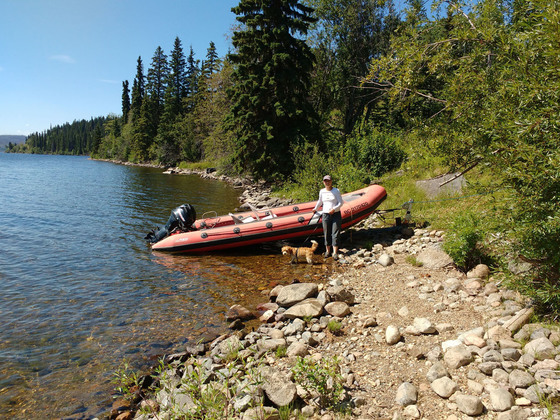 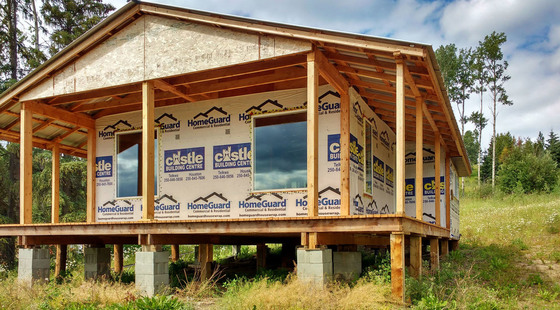 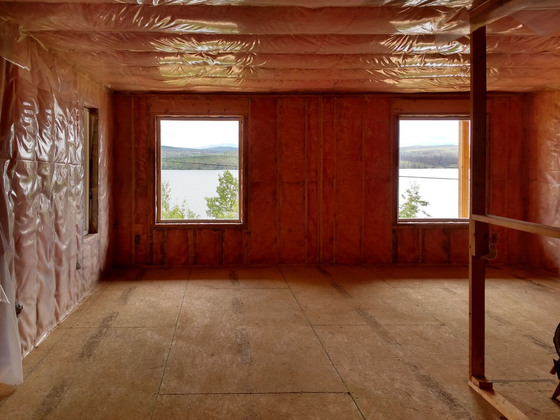 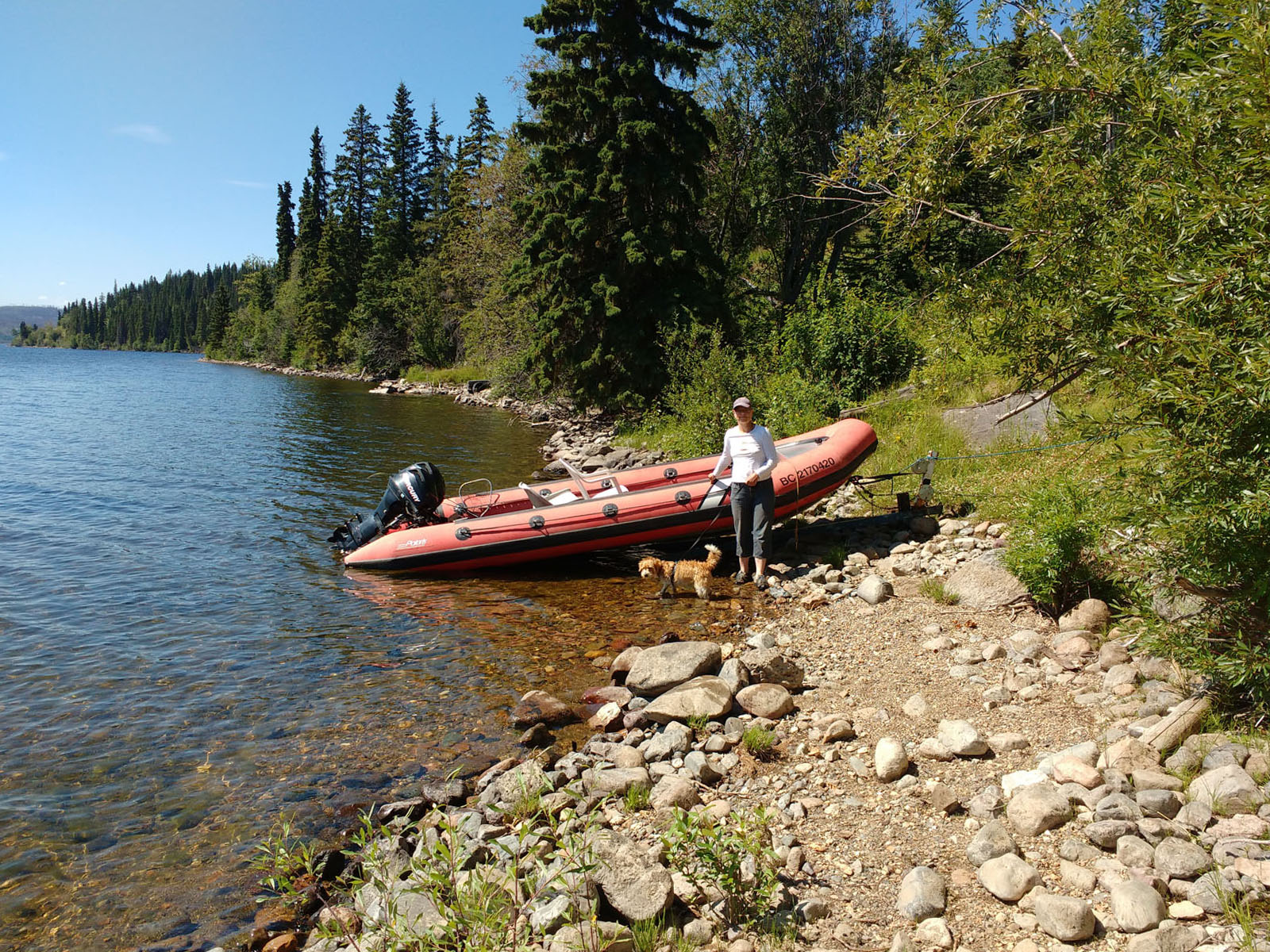 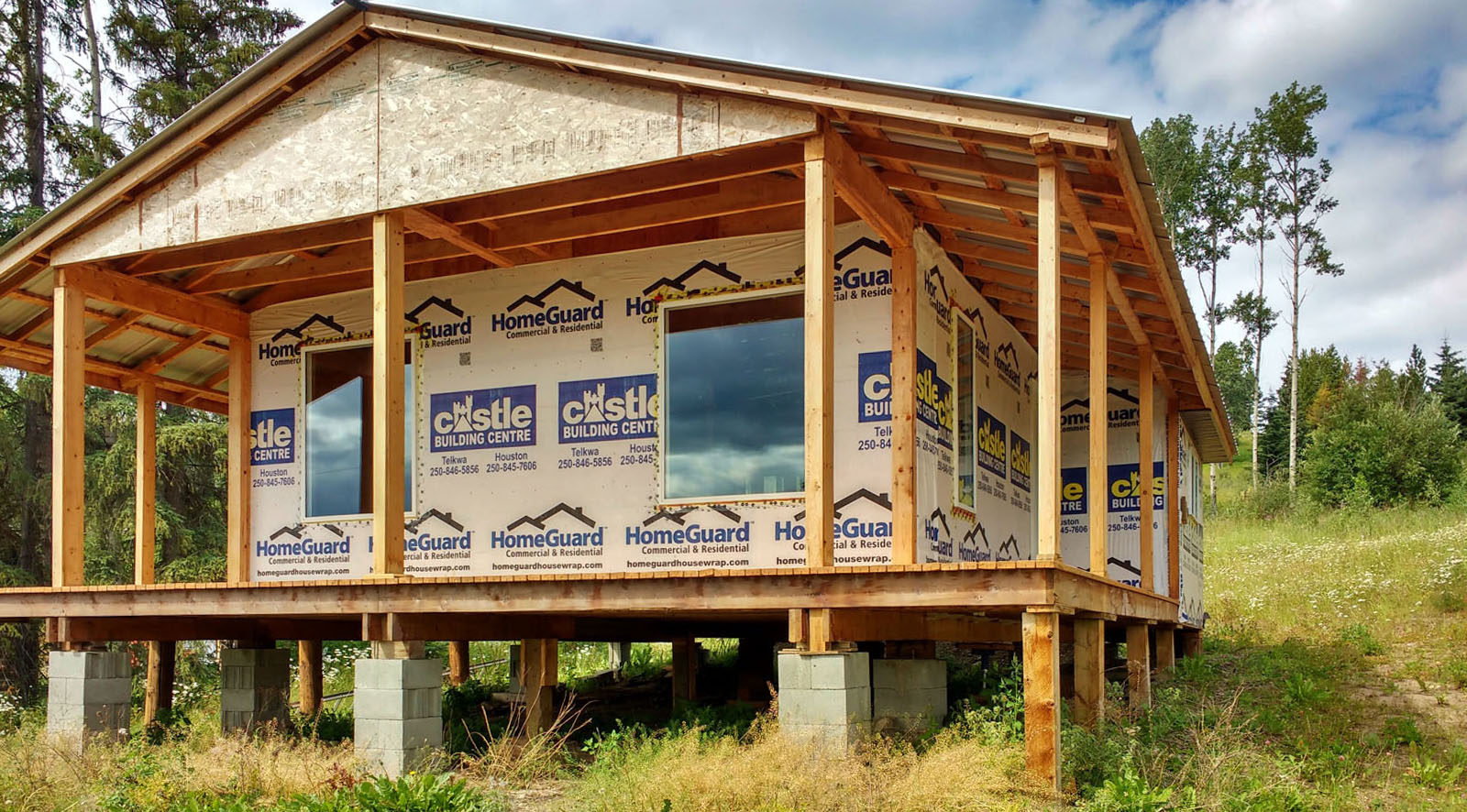 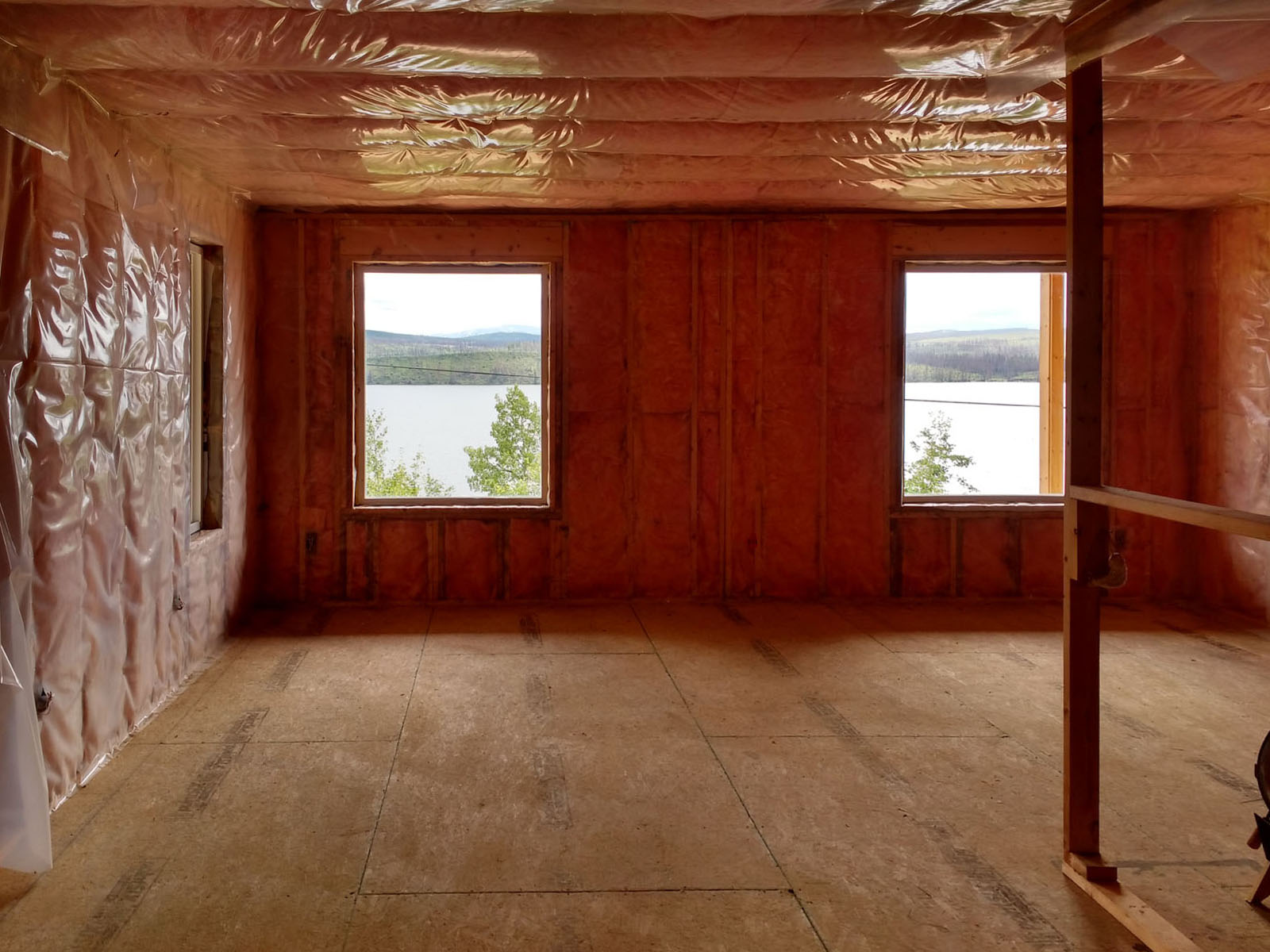 Get ready for 20 acres with a narrow 100 feet of southerly shoreline on sparkling Francois Lake. The waterfront portion has a pebble beach, however is not large enough to build on.

A quality constructed 720 ft2 home is completed to lock up with doors, windows, insulation/poly, electrical rough-in, exterior weather wrap and metal roofing. A spacious wrap-around deck on three sides maximizes views of the lake, hills and mountain countryside. Visionary ideas to complete this home is all that is needed.

The property’s panhandle reaches down to the lake while most of the acreage gently rises through varied benches of treed areas and meadows to the southern property line. Approximately two-thirds of the western line back onto Crown land extending along the lakeshore. Colleymount Road passes through the lower reaches of the panhandle, below the existing home.

From Burns Lake take Highway 35 and drive 24 km south to the Francois Lake Ferry. Keep straight (west) onto Colleymount Road for 50 km towards the community of Noralee and continue driving west for another 400 m, the driveway is on the right.

The Lakes District of Northern BC embraces over 300 wilderness fishing lakes and 3,000 miles of pristine shoreline. The district extends from the Stikine Mountains in the west to the Omineca Mountain Range in the east. Bordered by Ootsa Lake in the south, it then extends northward to Babine Lake.

Burns Lake (pop. 2,800) is the closest town with 74 km on combined gravel and paved road. This town serves the greater surrounding areas’ population of over 8,000 within the Regional District of Bulkley Nechako. Burns is a hub for the local logging, sawmills, mining and tourist industries.

Houston (pop. 3,600) is 75 km northeast via a gravel Forest Service Road. This town is also a forestry, mining and tourism town known as the ‘steelhead capital.’ Ecotourism is by far the biggest attractant for tourists.

Beautiful Francois Lake is approximately 110 km long, the second largest natural lake in British Columbia. The Nechako Reservoir, sometimes called the Ootsa Lake Reservoir, is one of the largest hydroelectric reservoirs in Canada, formed by the Kenney Dam.

Burns Lake Airport is 20 kilometres northwest of the town. Major commercial airlines fly into Smithers Airport, 143 km west of Burns Lake, and International Prince George Airport, 237 km to the east. VIA Rail Canada makes a stop at Burns Lake on the iconic trip from Jasper to Prince Rupert. Vital to transportation, a free ferry has frequent sailings across Francois Lake.

Overall the area receives an above-average of sunshine than other BC areas. In June 1982, Burns Lake recorded a whopping 376.5 hours of sunshine. This is the most sunshine ever recorded during the month of June. The warmest month is July, with an average high of 21°Celcius. The average snowfall is approximately 190 cm, with the chilliest month in January having an average low of -15.3°C.

The entire area known as the Lakes District is famous for its excellent fishing and game. One of the purest water sources in BC, Francois Lake has plenty of rainbow trout, kokanee, Dolly Varden and char . This is sport fishing at its finest, with prize-winning trophy fish.

With a lake of this size, watersports of all types are sought-after from outdoor enthusiasts or those just wanting to simply ‘hang out’ and revel in this remarkable area. There are many Forest Recreation Sites, providing a myriad of trails to hike, mountain bike and camp.

Noralee Resort has the only private boat launch on Francois Lake in the area. This popular resort offers heated cabins, camping and RV sites. It’s a great place to stock up on supplies at their well-appointed small grocery store. This picturesque community is prime for weddings, family reunions and retreats. The adorable historic chapel is often the place for an intimate wedding.

This area is well known for its hunting and wildlife watching opportunities. Pack your camera and be ready to snap pictures of the wildlife. Eagles and Ospreys are plentiful, and bears, moose and deer wander freely.

After the western end of Francois Lake was surveyed, trappers took up residence long before there were roads to the area. It wasn’t long, though, before the farmers followed. Lee Newgaard settled in 1915, walking nearly 80 kilometres to Houston twice a year for supplies. In 1923, he ended his bachelorhood by marrying Nora Middleton. When the couple opened a store and post office over a decade later, the community was named by combining their first names, Nora and Lee, in honour of their establishment.

By the 1930s, there were enough families in Noralee to warrant the construction of a school. The log structure had both students and a teacher when it opened in September 1937 but interestingly had no desks. Martin O’Connell, who later became a professor at the University of Toronto and a Liberal cabinet member in Pierre Trudeau’s government, conducted his first classes outside.

The original log school remained in use for more than a decade before residents started petitioning for a new facility. The community constructed a new, larger school in 1952, and the original building was burned to prevent it from primarily being a hazard to livestock.

Declining enrollment eventually forced School District 55 to close the Noralee School. It was sold by sealed tender in 1965.

Power at the road. 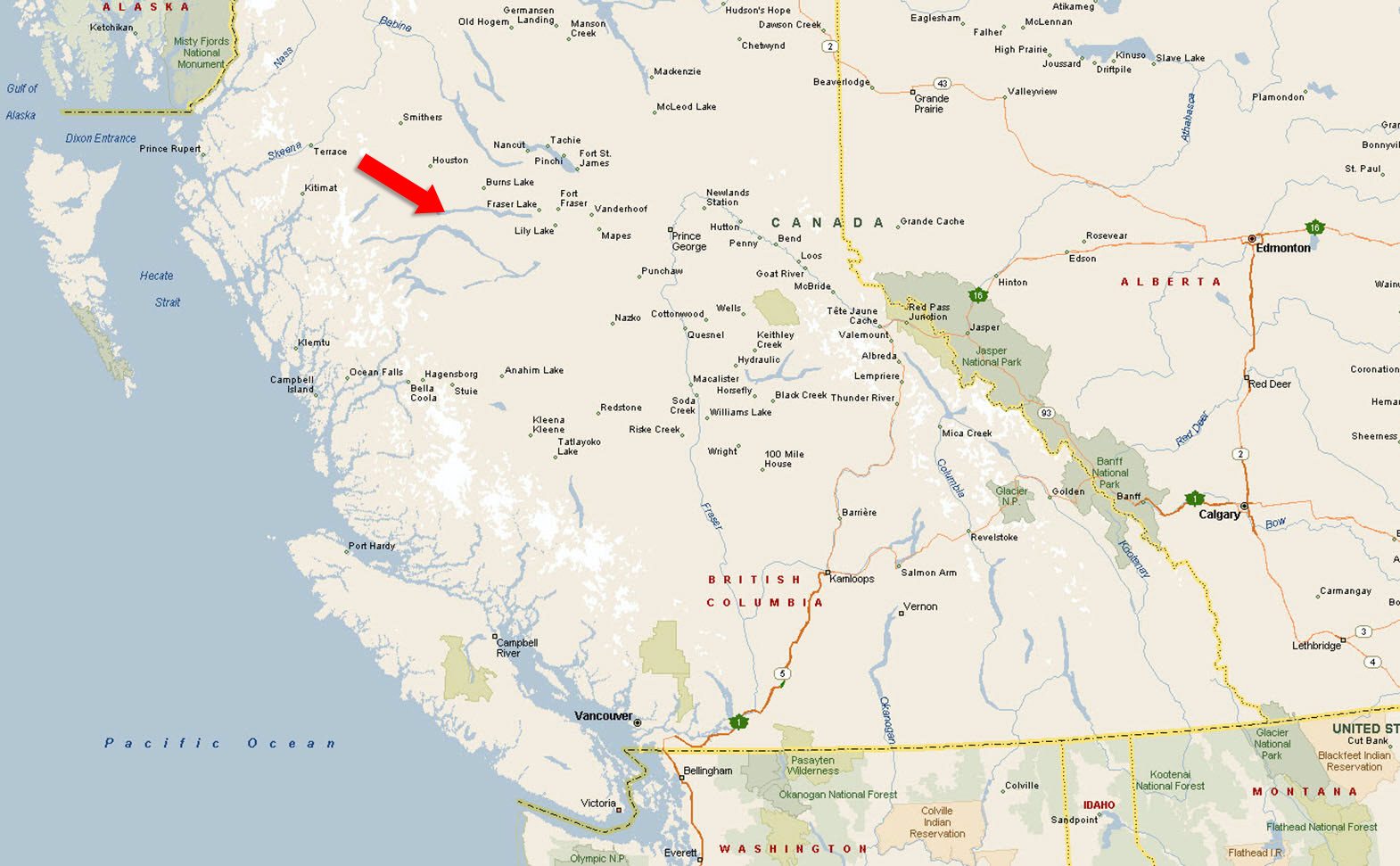 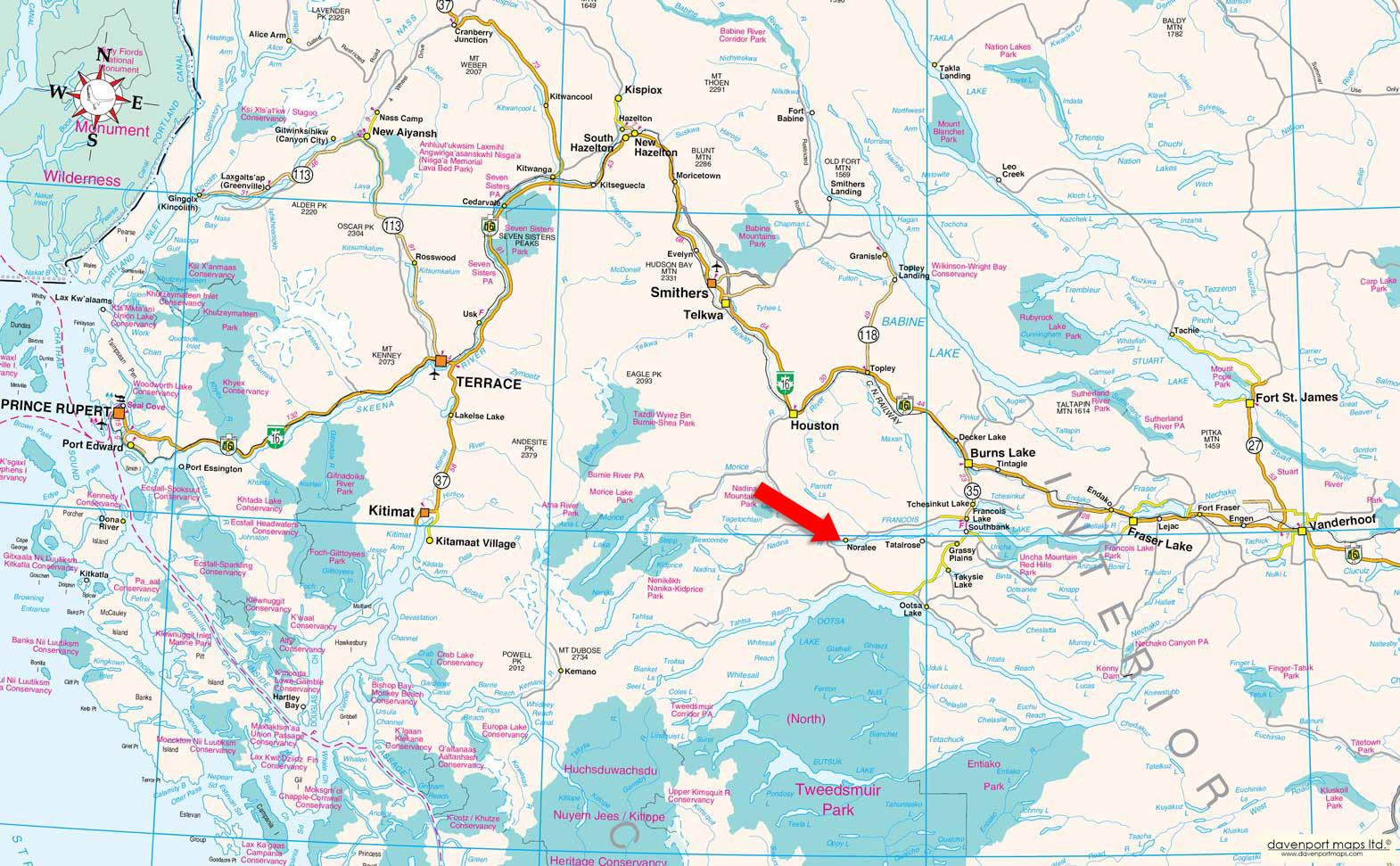 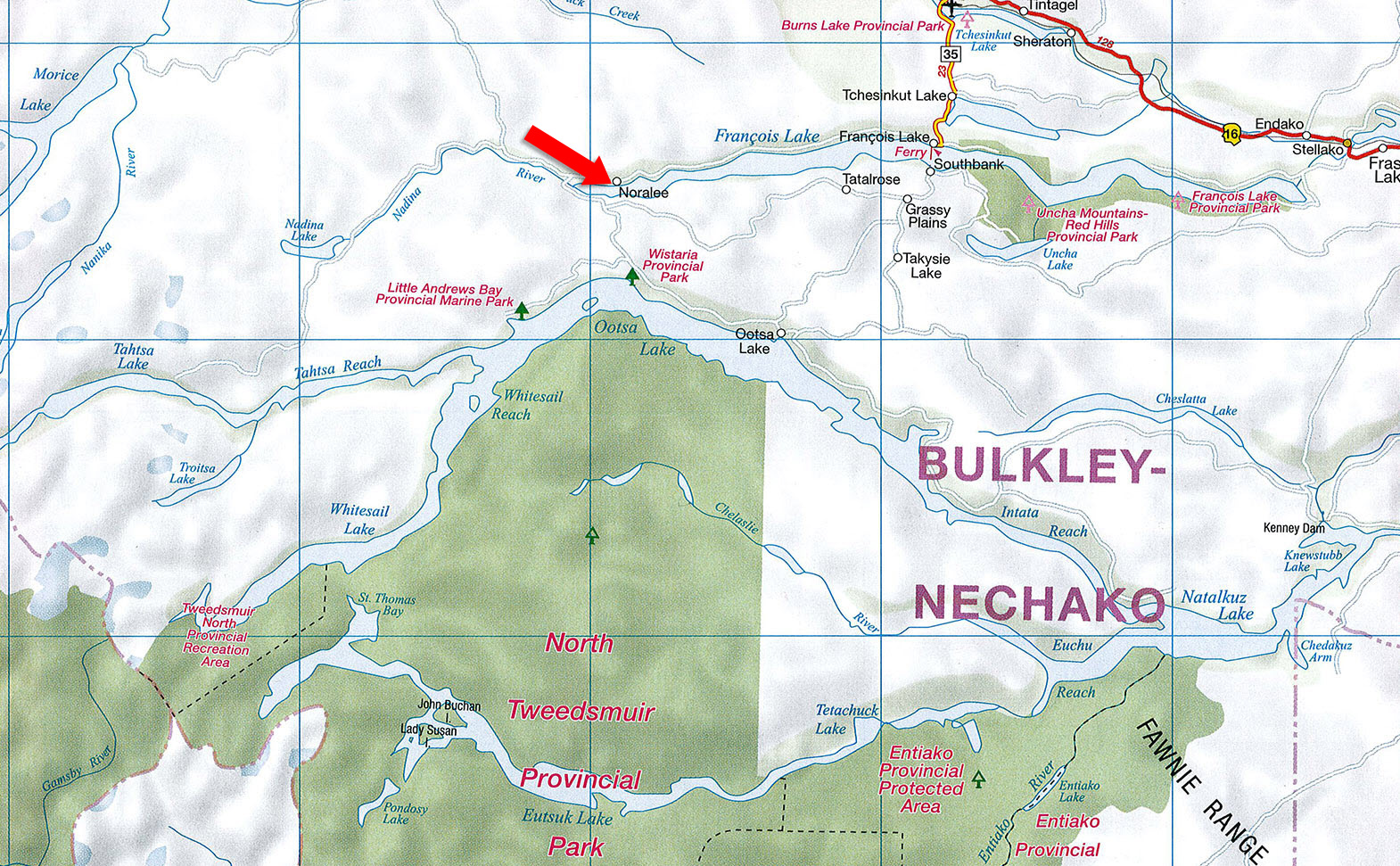 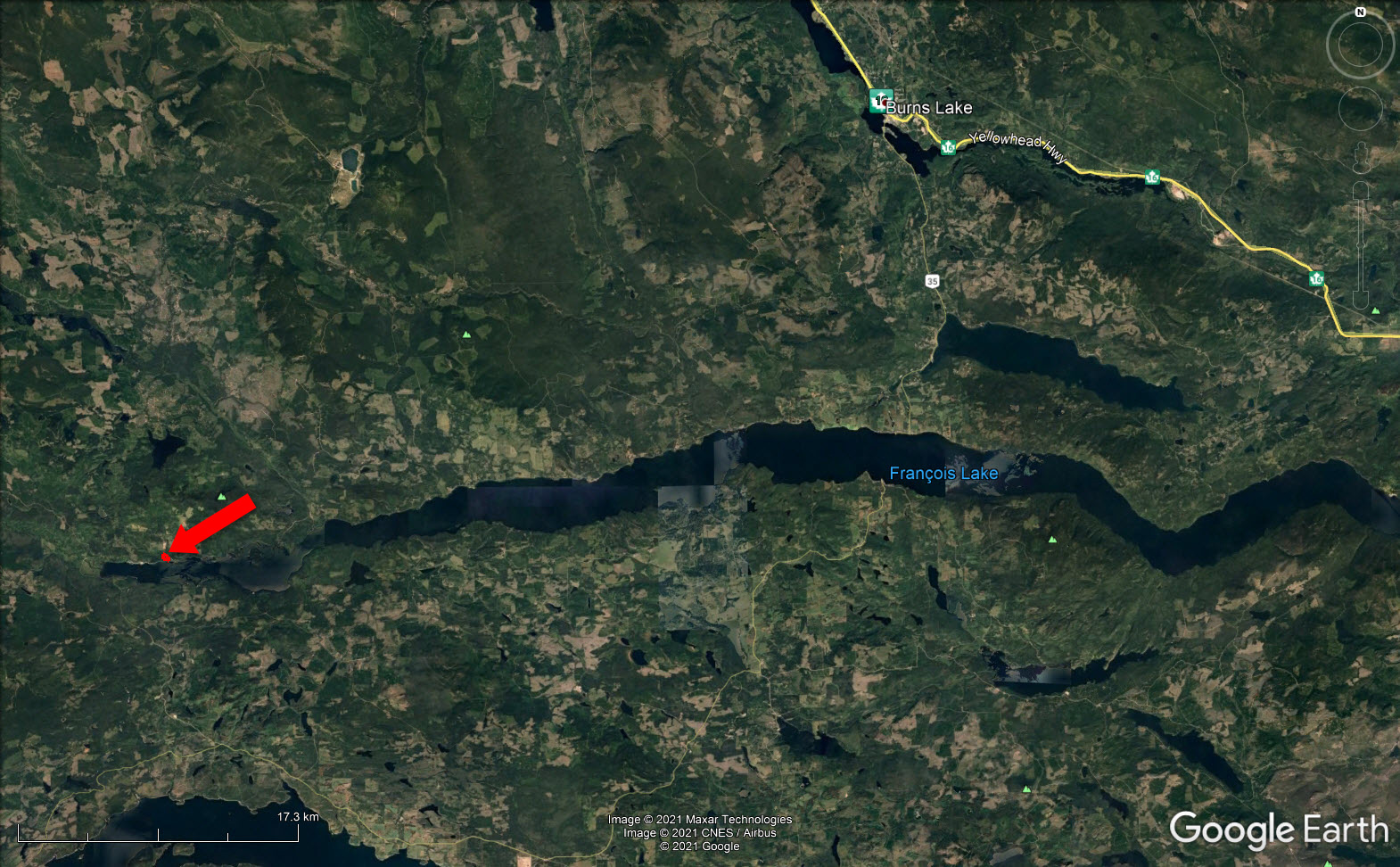 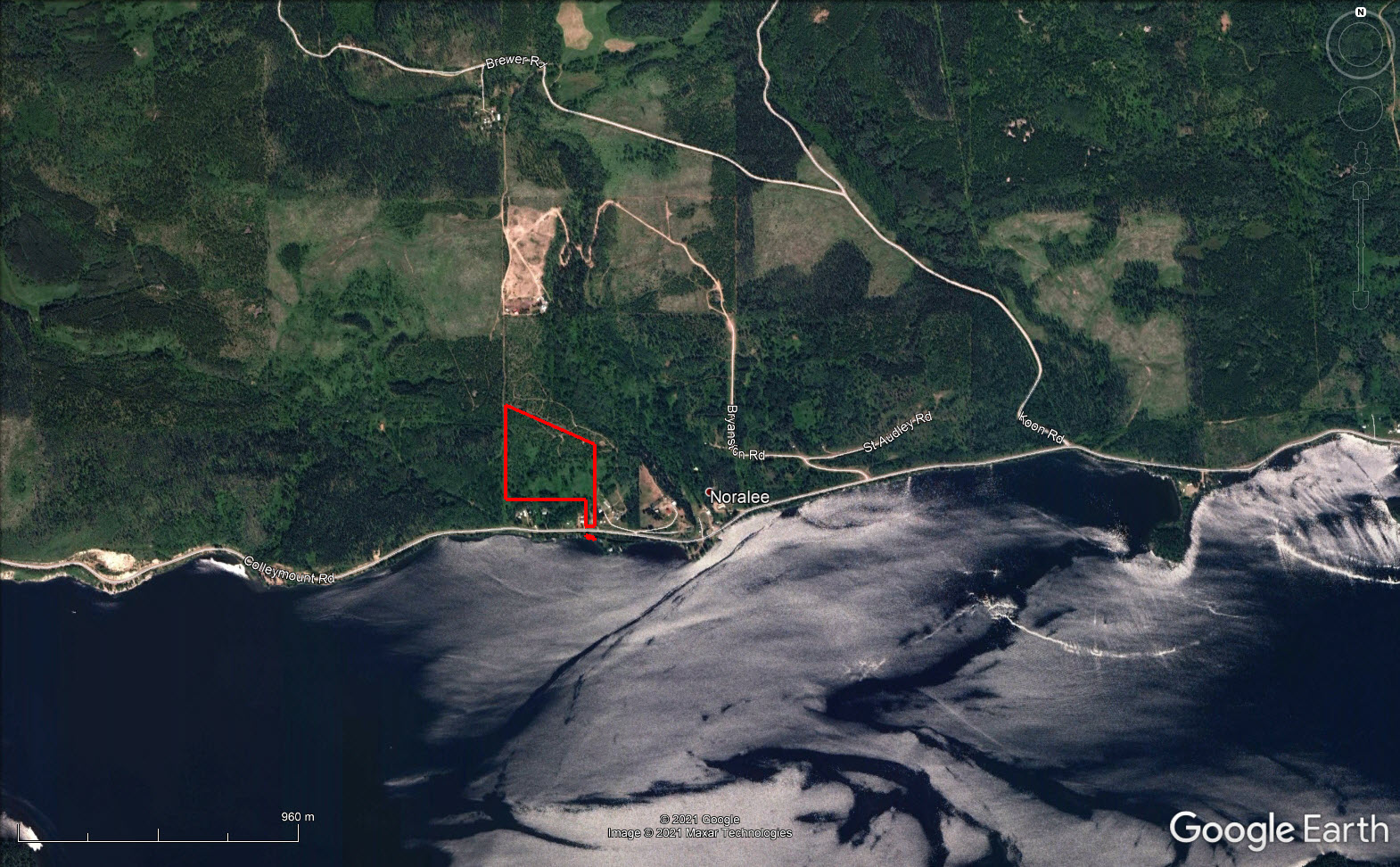 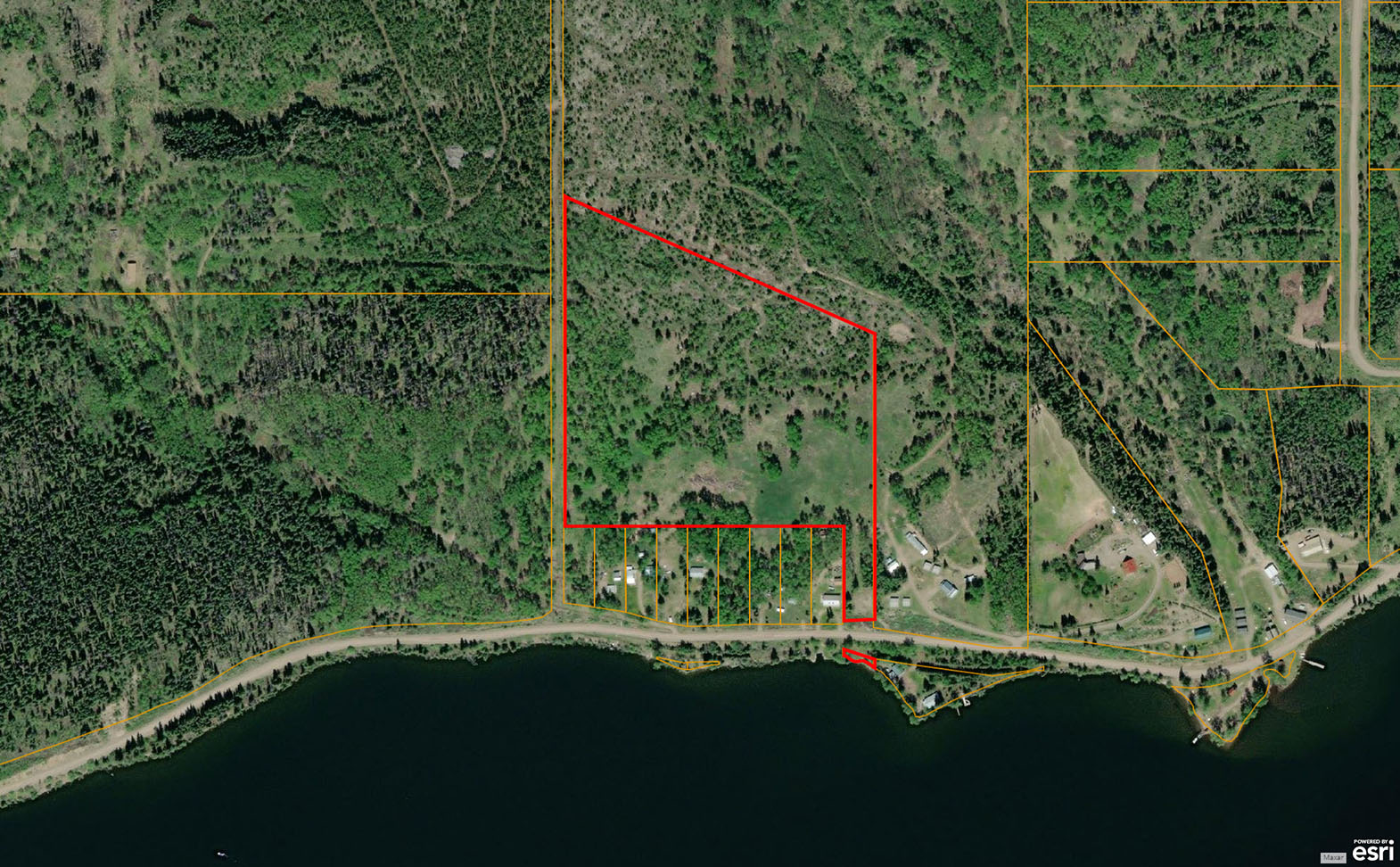 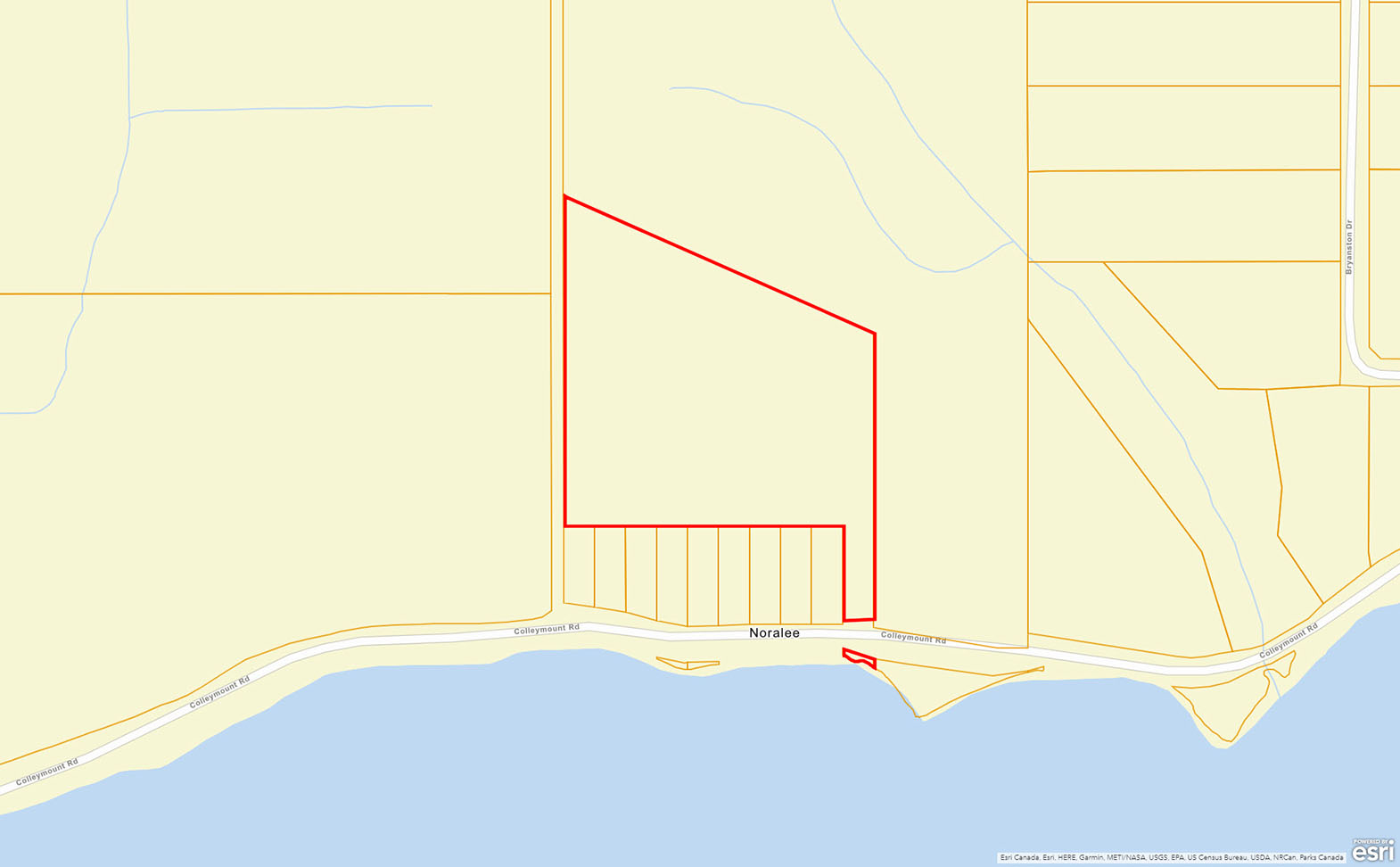 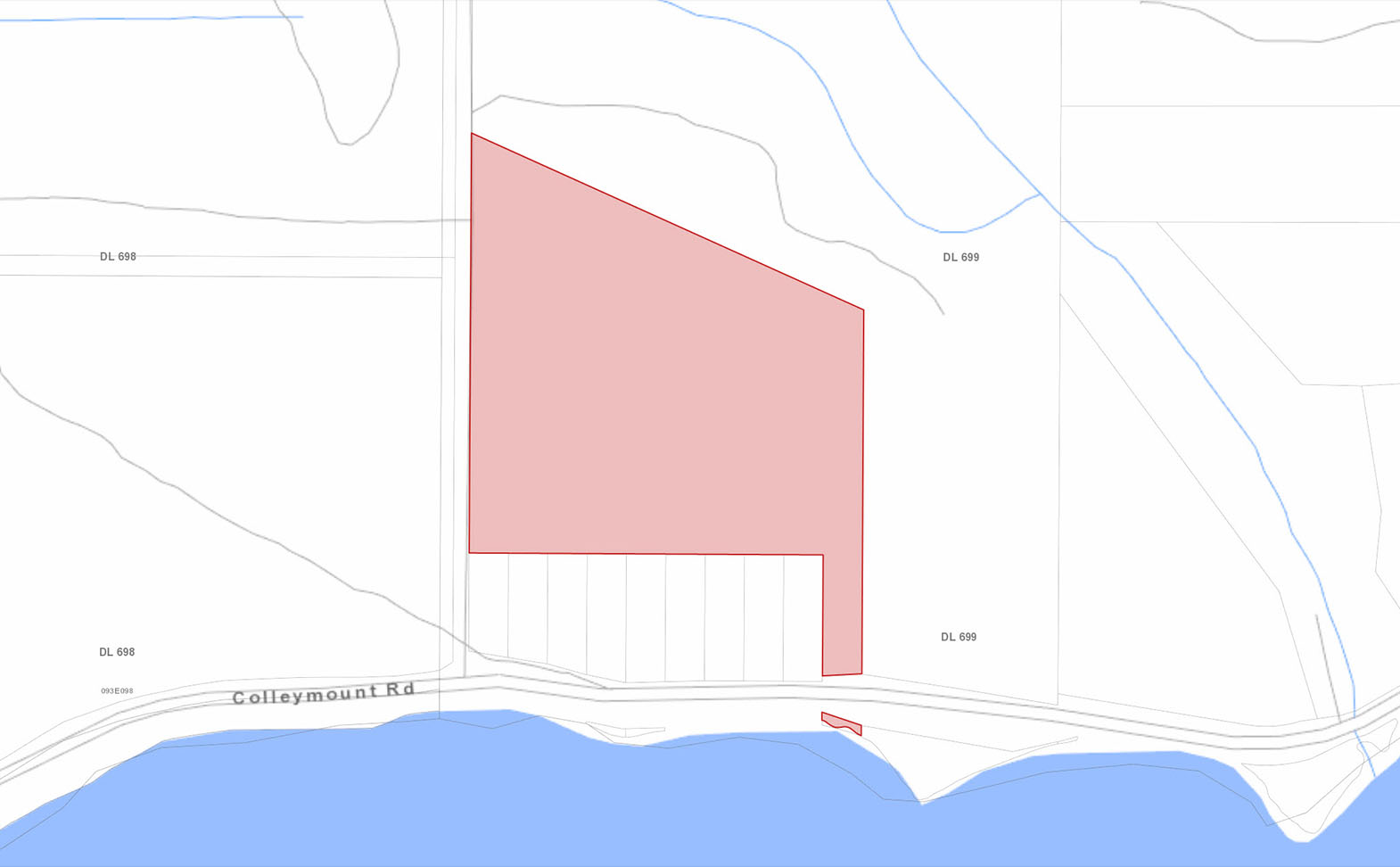