North Coast & Northwestern BC Listing No. 21102

The sale of Pioneer Lodge represents a fantastic opportunity to not only run your own fishing lodge, but also expand into skiing, hunting and eco-tours. This individual British Columbia property complex comprises individual rustic log cabins as well as more up-to-date modern accommodation, all of which complement each other. The lodge can comfortably accommodate up to a maximum of 15 people in a total of 15 double beds.

Anyone interested in the property also has the option of buying the seller’s Rod Days on the World Class Kalum and Skeena Rivers, as well as other very productive rivers in the area. This resort is already set up and fully functional with a beautiful lodge for your guests dining and relaxing pleasure. The river rock stonework and accents are rustic, beautiful, and ideal for visiting clientele whether they are travelling from domestic or overseas locations—the lodge really captures the spirit of a traditional Canadian lodge. The full professional and licensed kitchen will make any chef happy. Open fire pits and a virtual golf simulator theatre system (HD Golf) are perfect for those days spent at the lodge! Set up with dry-room, guide room, workshop, and garage for the jet boats and a helipad for the more adventurous.

The guest accommodation has been renovated over the last few years to a very high standard with the recent upgrade of the cabin washrooms in the last 12 months.

The lodge consists of the main lodge, 3 individual log guest cabins, a self-contained apartment block (built 2014) featuring 3 individual open-plan suites, an owner’s residence, boathouse with apartment above, garage with workshop and storage room, and a generator room providing back-up power in cases of mains power outage. A drilled well, an insulated and heated pump house, septic tanks and drain fields are in place as well as a helipad. The area around the buildings is cleared and landscaped while the rest remains treed and natural providing a very peaceful and tranquil setting.

The main lodge is a log building, 1,200 ft2 on the main floor with a 355 ft2 loft, on poured concrete foundations with a metal roof. The interior walls are log and drywall with cedar ceilings. The vaulted first floor dining and socializing area of the building features a large rock fireplace with a wood stove and skylight plus two washrooms—one for staff and the other for guests. In addition to the lounge area, the main lodge comprises a large open plan commercial kitchen, equipped with a walk-in cooler, deep freezer, commercial sanitizer and vacuum packing machine. A laundry room is located beside the kitchen with separate access. The second floor has a large bedroom with a deck. This building is heated with wood and electric baseboards. A covered deck compliments the front of the building.

This new, 1,800 ft2 building features three fully self-contained apartments. Each open-plan apartment has two queen beds, a dining and relaxing area plus a modern shower room. The exterior of the Clumps is comprised of bevelled cedar siding and a covered walkway connects each apartment.

The 930 ft2 boat house provides storage for riverboats, has a foundation of concrete filled Sonotube®, ranch wall siding and a metal roof. Above the boat storage is a 500 ft2 apartment with a kitchen, large queen size bedroom, three-piece bathroom, spacious living room and a balcony with stunning views towards Bornite Mountain.

The dry room is equipped with a pellet stove providing heat for drying waders and fishing/ski equipment. The dry room has a concrete floor and tongue and groove pine throughout. Adjacent lies both a large storage area with two deep freezers and a maintenance workshop.

The old smoke house has been converted into a backup generator room plus separate storage. The generator is 37,000 kW and powers the essential parts of the lodge when the main power is interrupted.

Terrace is a city located near the Skeena River in British Columbia. The community is the regional retail and service hub for the northwestern portion of British Columbia. With a current population of over 12,000 within municipal boundaries, the city services surrounding communities as well bringing the Greater Terrace Area population to over 18,000 residents. The Kitselas and Kitsumkalum people, tribes of the Tsimshian Nation, have lived in the Terrace area for thousands of years. The individual Indigenous communities neighbour the city with Kitselas to the east and Kitsumkalum to the west.

As northwest British Columbia's main services and transportation hub, Terrace is intersected by the Canadian National Railway as well as Highway 16 (running east to west) and Highway 37 South. Air services are provided at Northwest Regional Airport, with connections to Prince George, Smithers and Vancouver. The Terrace railway station is served by Via Rail's Jasper-Prince Rupert train. Health care in Terrace is administered by Northern Health and provided in part by Mills Memorial Hospital.

The Great Bear Rainforest was officially recognized by the Government of British Columbia in February 2016, when it announced an agreement to permanently protect 85% of the old-growth forested area from industrial logging. The forest was admitted to the Queen's Commonwealth Canopy in September of the same year.

For natural splendor, swimming and camping just outside of town take a trip to one of the many Parks and Recreational Sites in the area.

Winter in Terrace offers endless opportunities to get outside and enjoy the snow, fresh air and natural beauty. From the exhilarating slopes of the alpine to the peaceful Nordic trails, we’ve got winter dialed.

Remarkable terrain with endless options for all levels.

From BC Parks to locally owned and operated campgrounds and RV Parks, you'll find an array of facilities and amenities served with a large portion of Terrace hospitality.

A rafting, kayaking or canoeing adventure is a great way to explore the waterways and landscapes. Imagine yourself gliding quietly over the water or surfing the waves of a raging river.

On a hot summer day, those craving a dip can cool off in a variety of refreshing rivers, creeks or lakes within minutes from downtown.

Enjoy 18 challenging holes and spectacular views of the surrounding mountains and glaciers at The Skeena Valley Golf and Country Club, or practice your swing at The New Remo Driving Range.

You’ve entered a hiker’s and biker's paradise with an array of easily accessible trails in the area. From heart-pumping climbs to extensive backcountry excursions, you will be treated to some of the most spectacular scenery.

A rock climber's paradise, this region is blessed with pristine granite towering walls.

Prime snowmobiling areas and trail networks through spectacular snow-scapes, forests and mountains are right at our doorstep.

Ice skating and pond hockey on frozen ponds and lakes are a must-do during the deep freeze of the winter months. You can also contact Leisure Services for their public skating times at the Sportsplex.

Explore the spectacular rivers and mountains of the Skeena/Kalum or Kitimat Valleys from the air. There is no other place like this in the world! Experience breathtaking views of snow-capped mountains, alpine lakes, glaciers and waterfalls, so don't forget your camera! The 15 minute "Mt Vanarsdoll" tour is popular with tourists as wells as locals. The tour takes you over the mountains just north of Terrace and returns along the Kalum River.

Though the Skeena River was valued as an important inland water route, the 288 kilometre trip from coastal Port Essington to Hazelton, at the junction of the Skeena and Bulkley Rivers, was hardly a leisurely cruise. Hudson's Bay canoe brigades, paddling sturdy, Haida-built cedar craft, encountered strong currents, swirling rapids, deep canyons and sharp bends on their week-long journey to the inland terminus.

Small steamboats appeared briefly on the turbulent river from 1864-1866, hauling supplies for the ill-fated Collins Overland Telegraph. When a transatlantic cable put an end to the ambitious North America-to-Siberia project, the steamboats were retired.

Fifteen years later, in 1891, the Hudson's Bay Company launched a specially-commissioned Skeena sternwheeler known as the Caledonia. At 100 feet in length, she was judged too short to handle well, and was returned to the Victoria shipyards to be lengthened. During the next two decades the Company operated a succession of sternwheelers between Port Essington and Hazelton, often competing fiercely with private entrepreneurs such as Robert Cunningham, who launched the Hazelton in 1901. Skeena river boating had become a lucrative business, serving the traders, prospectors, merchants and missionaries that briefly transformed Hazelton into the largest community in north-western British Columbia.

The Skeena's steam boating era was dominated by two enduring themes: the race for time to complete the upriver trip, and the adaptation of ship design to the rigors of the river. To the amusement of onlookers, bitter rivalry between sternwheeler captains led to frequent river tantrums, including the 1902 ramming of the HBC's Mount Royal by Cunningham's Hazelton. But no matter what the skill of the riverboat crews, a steamboat trip up the river took several days and involved considerable risk. At Kitselas Canyon, near present-day Terrace, shore-anchored cables were required to draw the boats through the perilous gorge. Six crew members drowned at the Canyon in 1907 while trying to free the wind-blown Mount Royal from the rocks at Ring Bolt Island.

The final chapter of Skeena steam boating paralleled the building of the Grand Trunk Railway early in the 20th Century. Construction supplies for the railroad were carried up the Skeena by a number of privately-owned steamships. In 1912, the Inlander made the last of the Skeena steamboat runs, guided by the captain who first steered the Caledonia up the river in 1891.

A man with a "Little" vision and big dreams arrived in the Skeena River valley in March 1905 by snowshoeing through gruelling deep snow along the Kitimat Trail. George Little liked what he saw, and knew that this land was indeed the land that he was searching for when he left his native Ontario. His keen interest and faith in Terrace were contagious and soon gave way to a flood of pioneer settlers, eventually, resulting in a thriving city that respects the man who founded Terrace and recognized the potential of the Skeena Valley.

Fitting nicely into his vision of Terrace, George Little donated 47 acres to the Grand Trunk Pacific Railway. The station stop was originally named "Littleton"; however, as there was already a Littleton in New Brunswick, Little changed the name to "Terrace" in reference to the local geography. Little established a sawmill to accommodate the demand for railway ties. In 1955, Little rode the first C.N.R. train to Kitimat passing over the same route he had trekked one half century earlier.

During World War II, military units composed primarily of conscripts from central and eastern Canada were stationed in Terrace. Morale was low due to the poor relationship between the soldiers and the local populace, the isolation, the damp weather, lack of recreation, crowded facilities, and the distance from home. In late 1944, because of declining enlistment and heavy casualties, Prime Minister William Lyon Mackenzie King was forced to reconsider his promise to not deploy conscripts overseas. Mackenzie King decided to a one-time assignment of conscripts for overseas service. On November 24, 1944, news that conscripts might be sent overseas triggered a mutiny amongst the men stationed in Terrace. It took until November 29 for officers to restore order to the troops. The Terrace Mutiny was the most serious breach of discipline in Canadian military history. 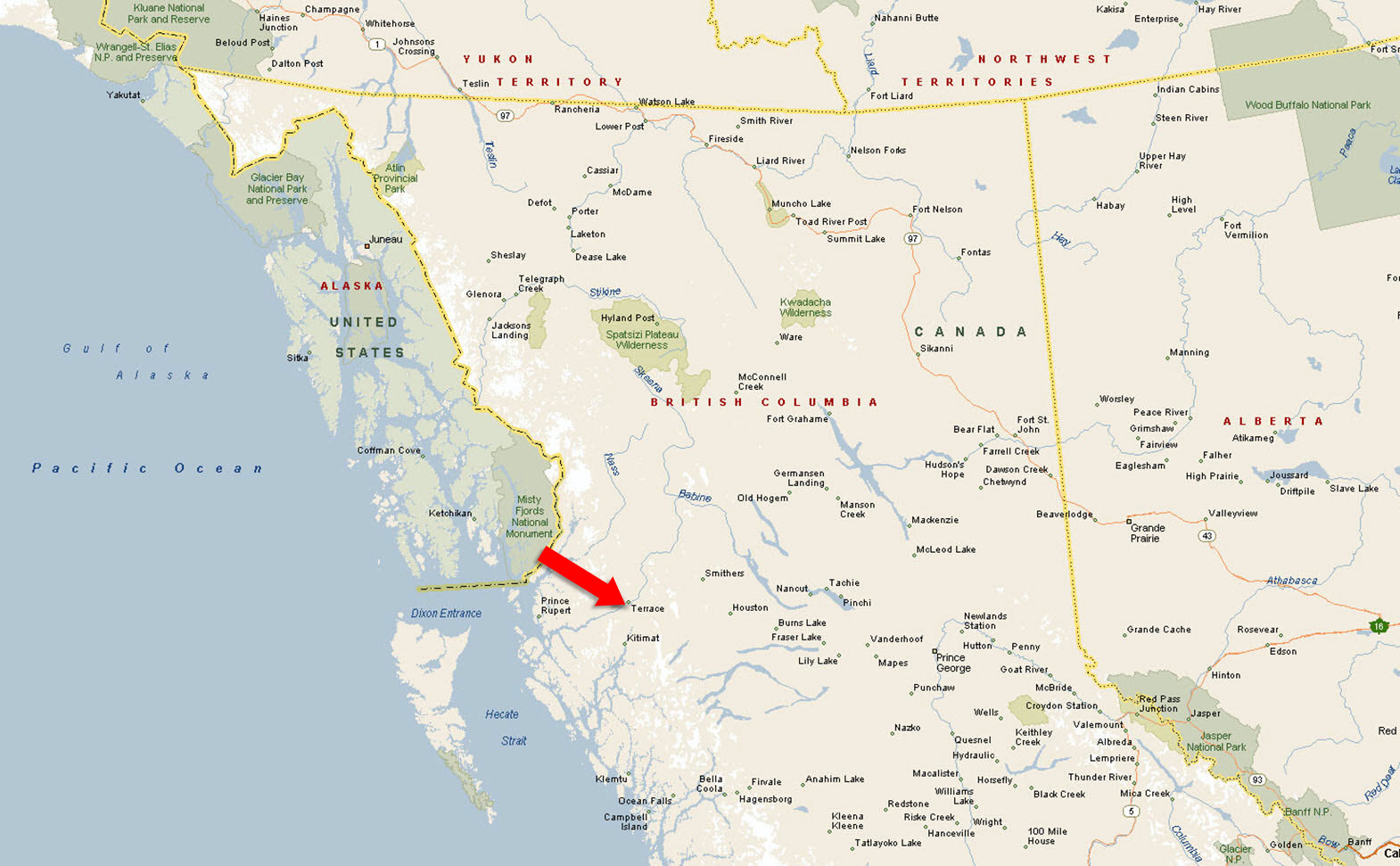 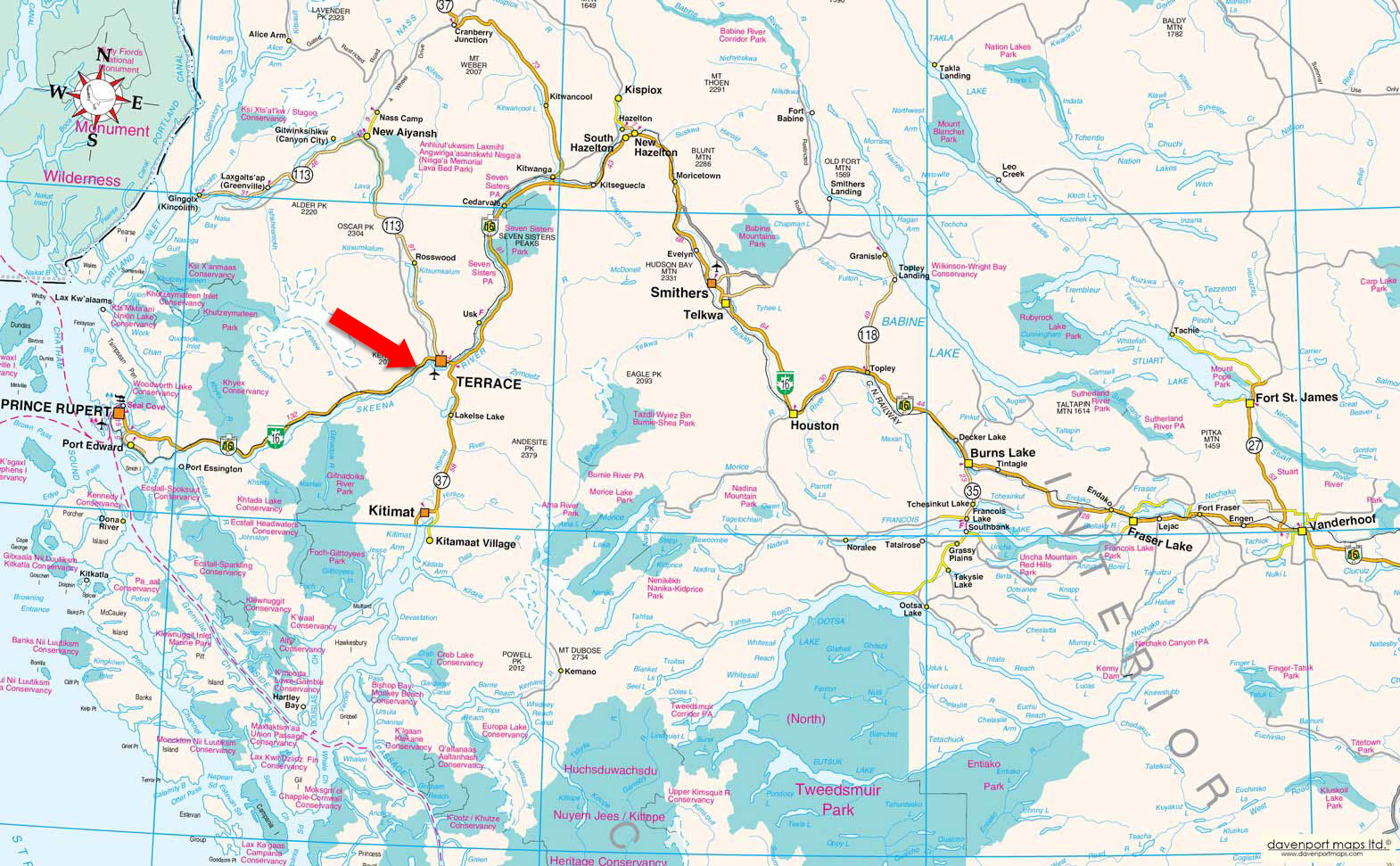 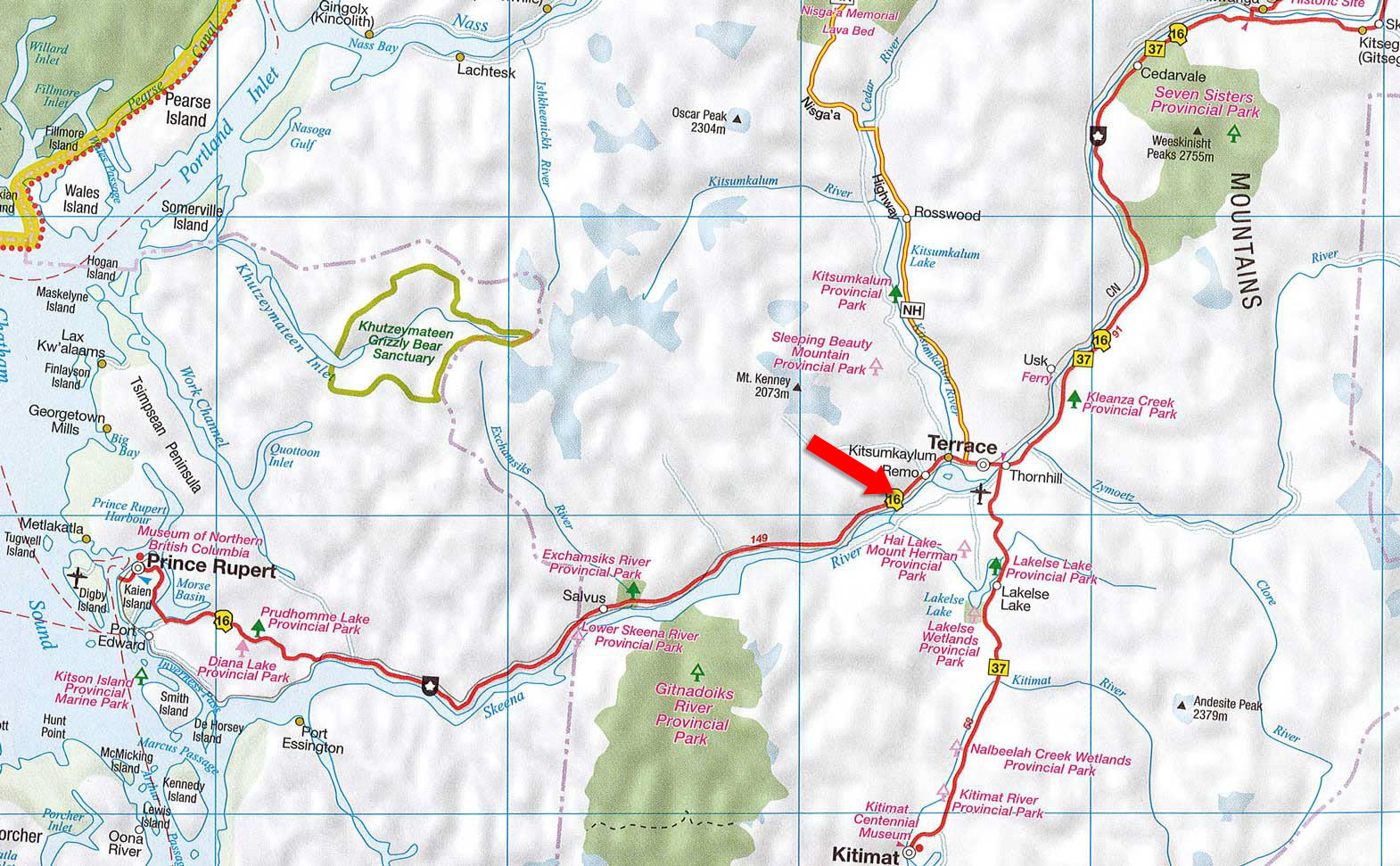 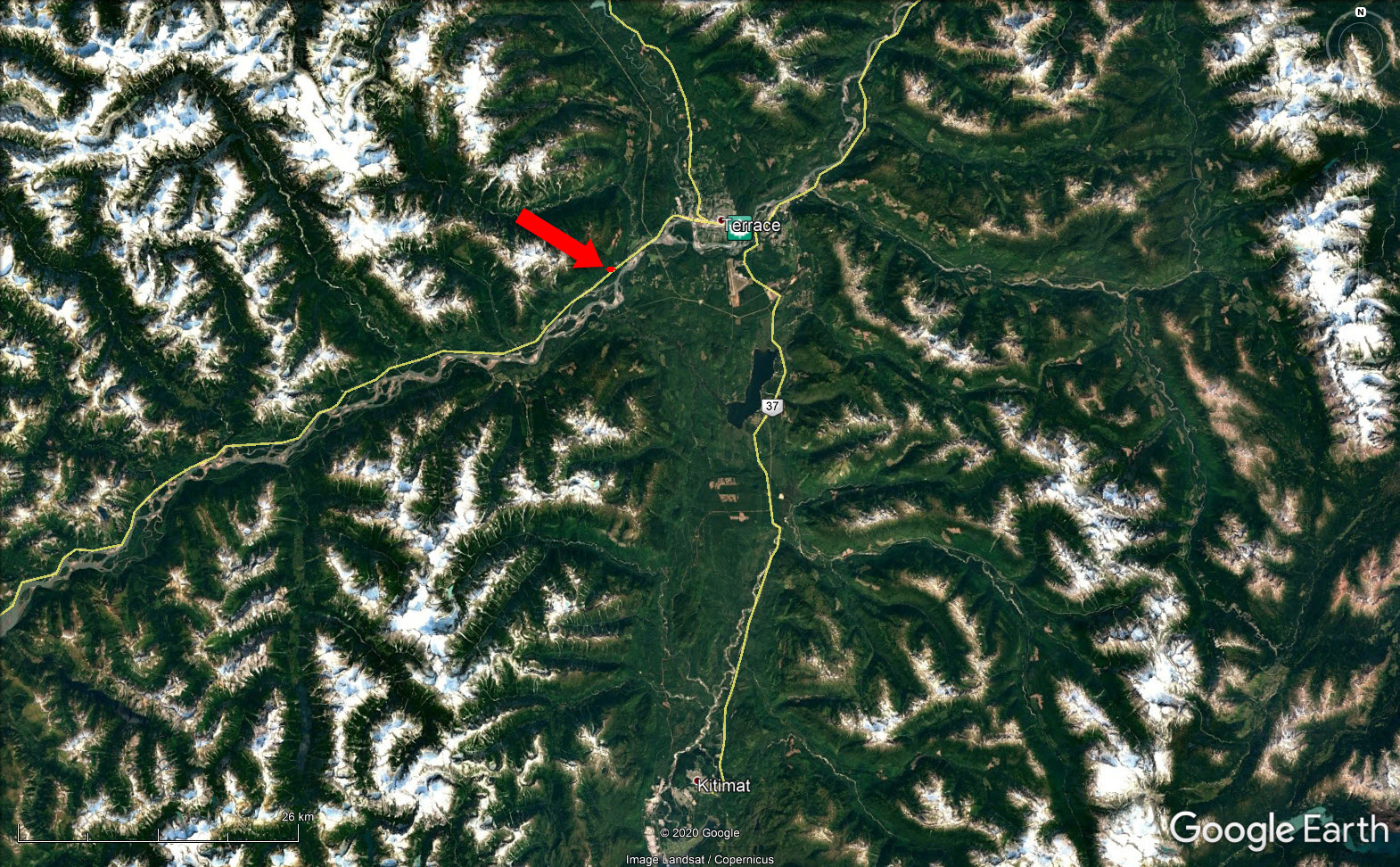 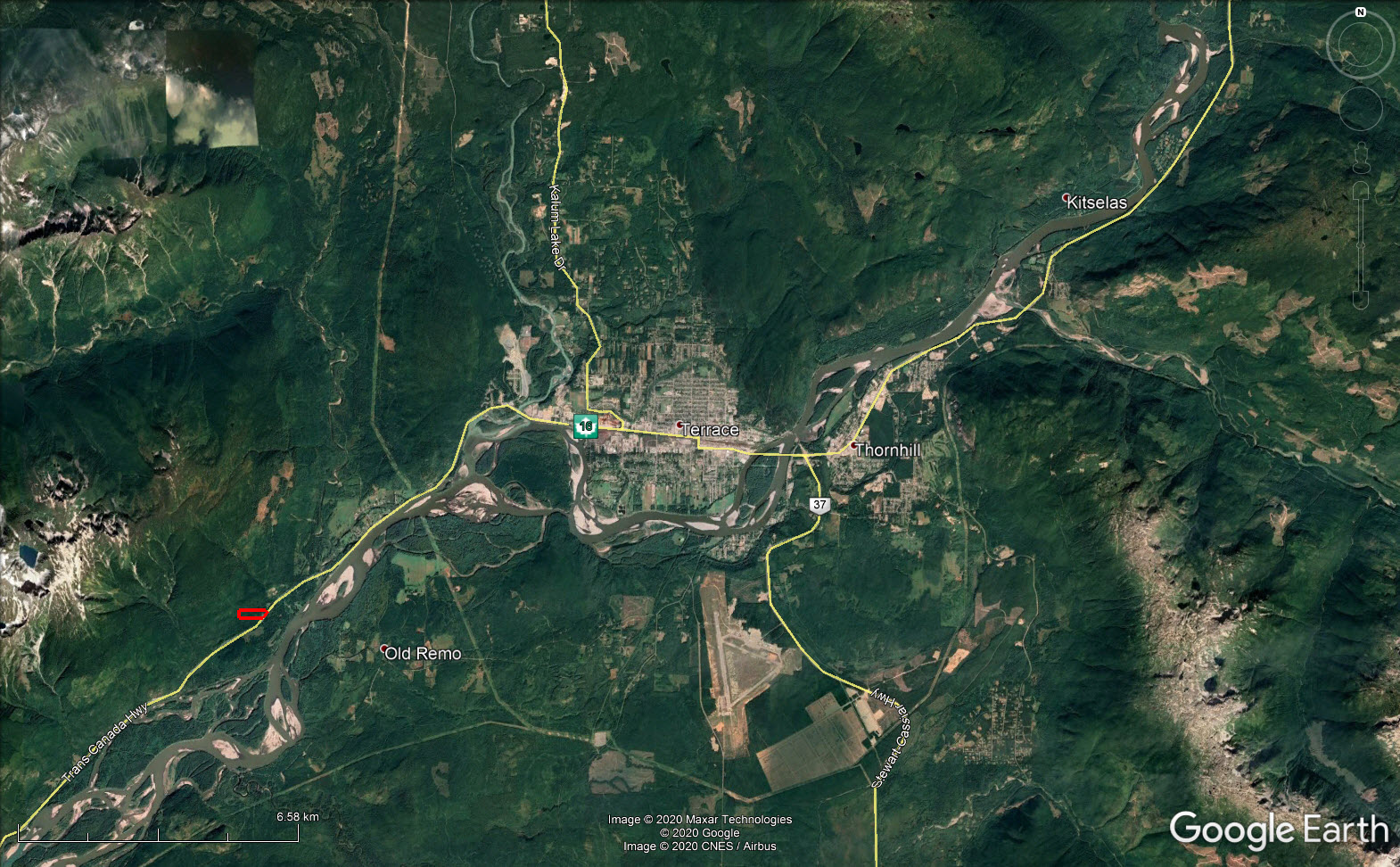 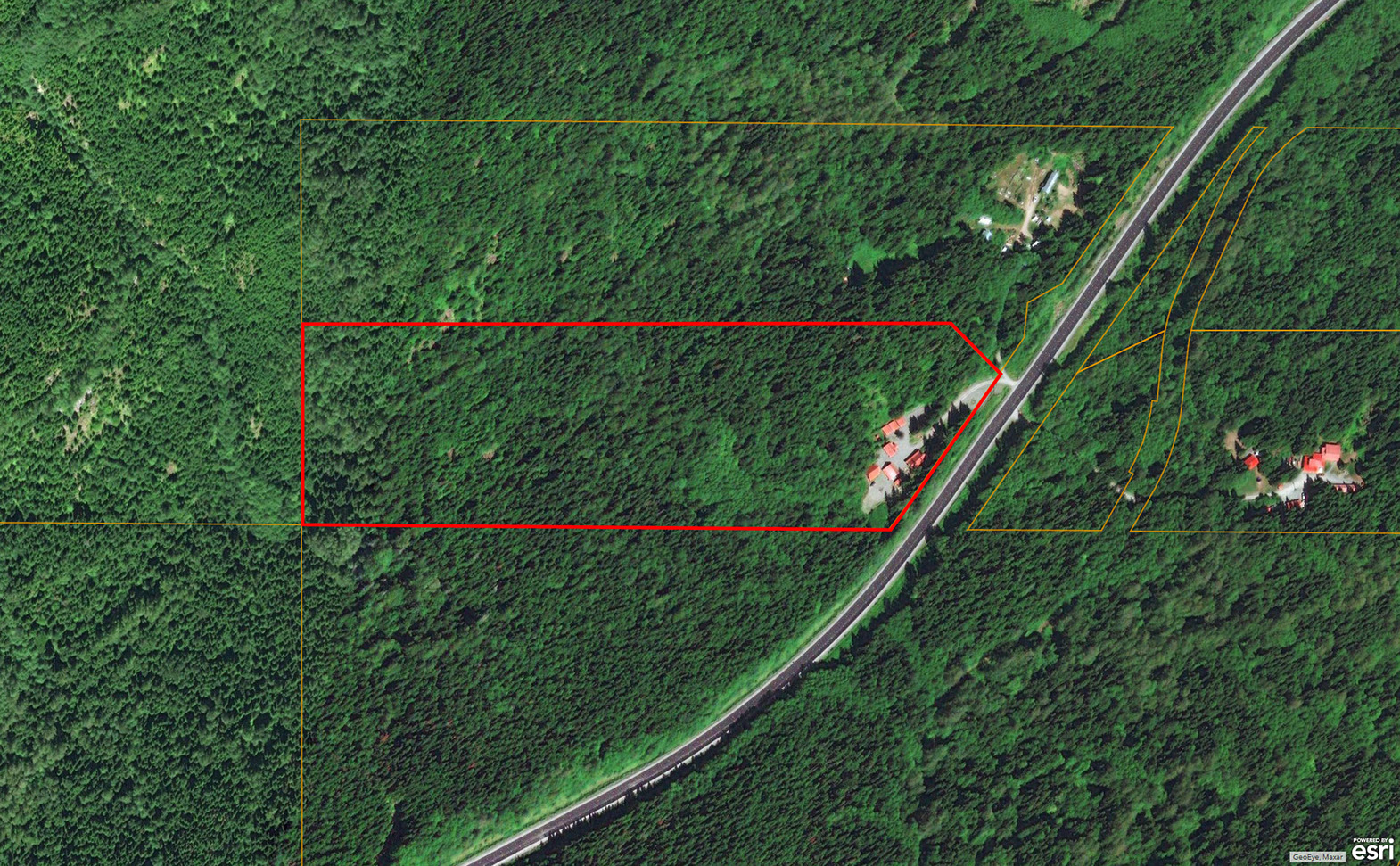 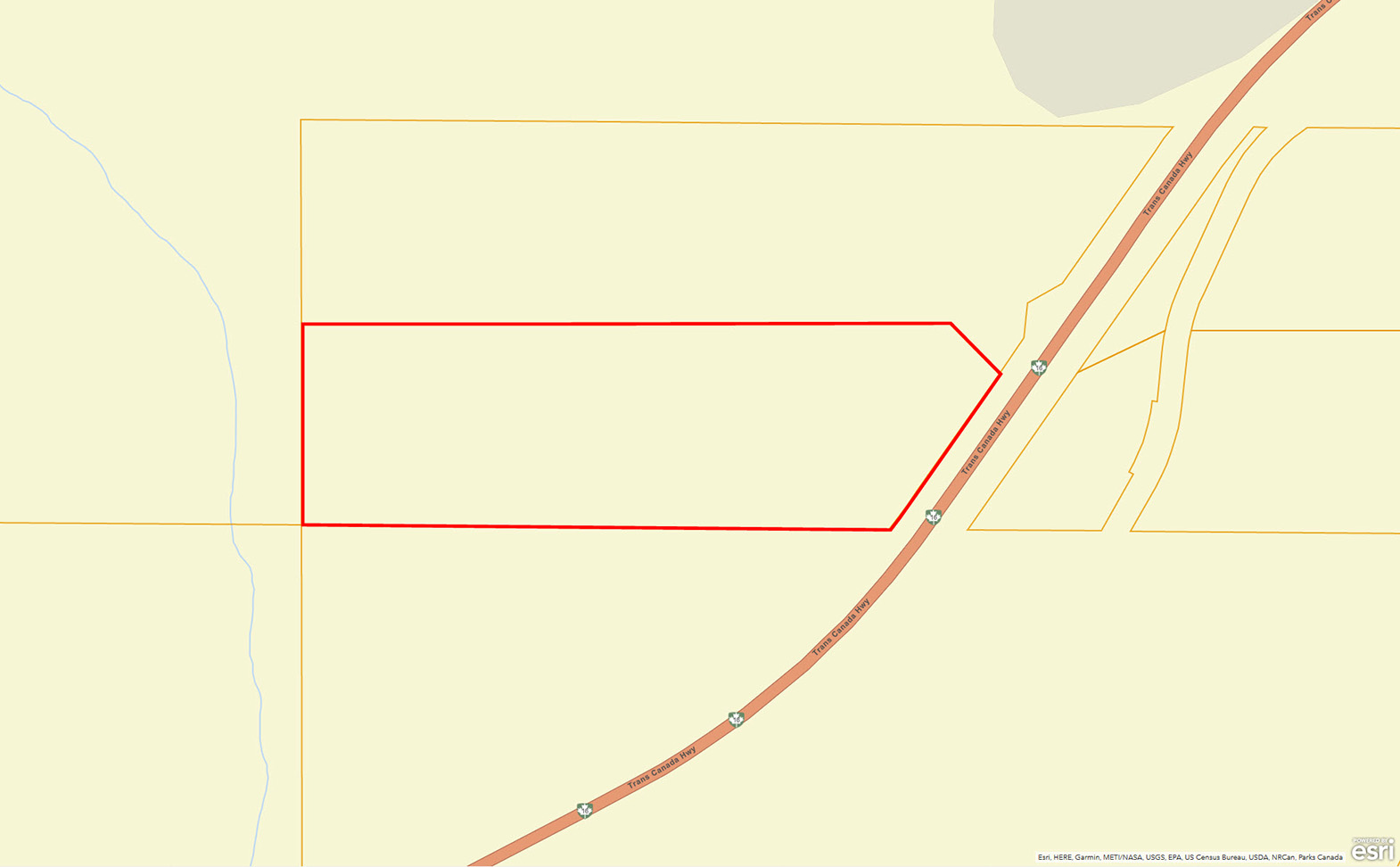 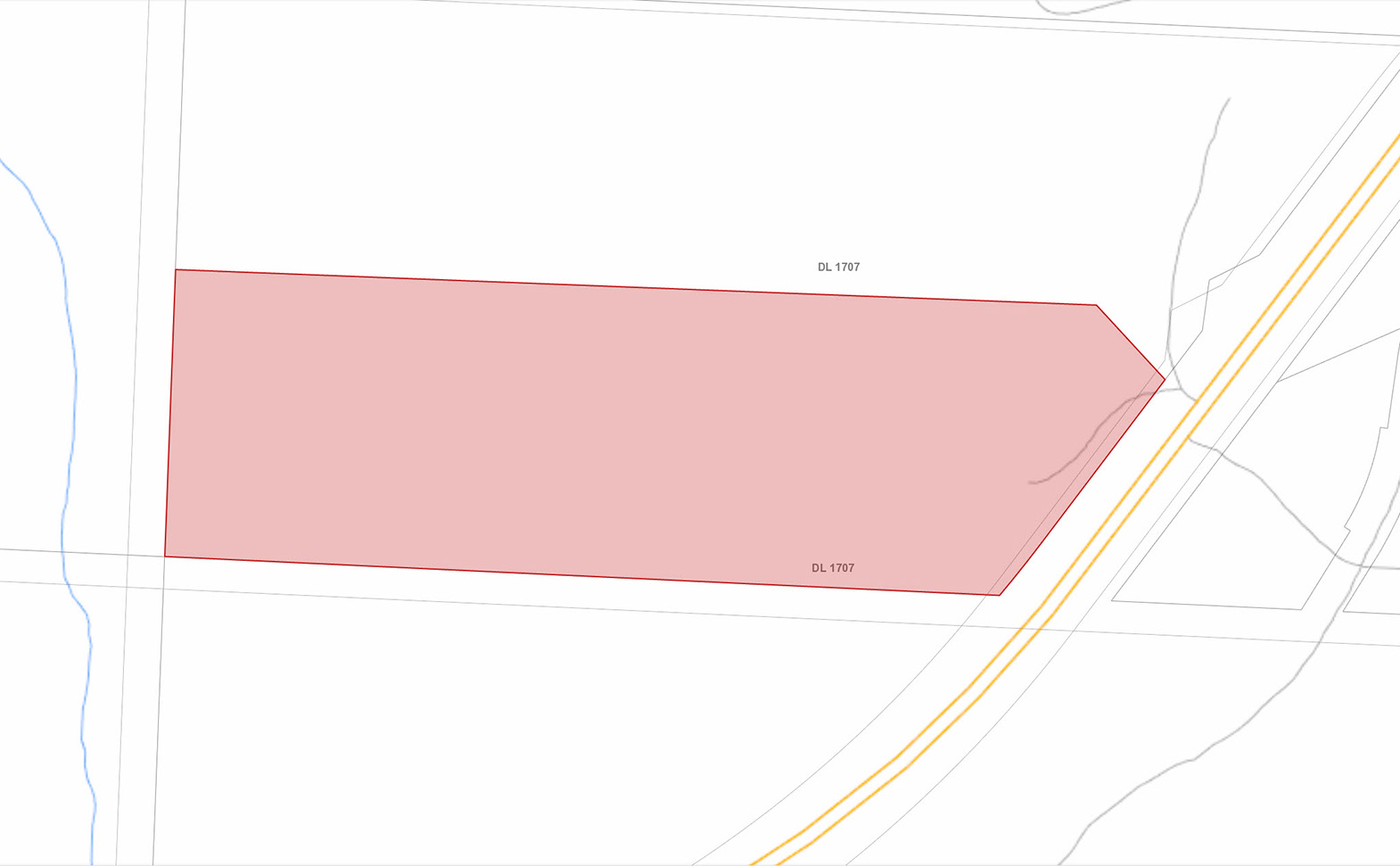