Located in the picturesque Christian Valley is one of the Kettle Valley areas most impressive ranches. With over two kilometres of pristine riverfront, The Van Oyen Ranch is an established property with multiple layers of value including hay production, a cow/calf cattle operation, going-concern egg production facility and some merchantable timber. The treed sections of this ranch have a nice mix of fir and ponderosa pine trees. The views across the valley to the river and mountains beyond is truly spectacular in all four seasons. It should be noted that the views to the far side of the river take in an expansive swath of Crown land and therefore you can rest assured it will not be developed.

The ranch has 550 acres with approximately 175 acres in hay production. Irrigation water is supplied by multiple water licences on the Kettle River and high volume wells with a 15 horsepower submersible pump and a smaller auxiliary pump. There are 3 wheel lines and 4 hand lines, which cover the main hayfields where 2 cuts per year is typical (some fields get 3), although the current owner often puts his cattle on the fields to graze the spring growth then takes a cut off later in the summer. The ranch has two separate grazing permits on the adjacent Crown land. The first permit has 279 AUM’s which amounts to 30 cow/yearlings. The second permit has 486 AUM’s which amounts to 80 cow/calf pairs, 20 yearlings and 3 bulls. Please refer to the mapping section to see the location and size of the two range permits shaded in purple.

The going concern egg production business is well-established. The combination of the egg production business and the cattle operation have many synergies which include the sustainable farming practice of fertilizing hay fields with chicken manure which comes from your own farm. The sellers have recently sold off their egg quota, however you can apply for small lot permit of 399 birds from BC Egg Marketing Board. The current flock has two age groups of older layers and new young stock (pullets) which are seven weeks old as of August 1, 2019. The farm has lots of capacity for additional layers with four separate barns, three steel bead pins and automatic feeders. The sellers have a proven set up with grading station, are CFIA registered and have a local egg route with regular customers and proven income.

The well-built four bedroom, two bathroom house is approximately 2,200 ft2 with main floor and basement with separate entrance. The home has excellent level access off Christian Valley Road and sits on a perch overlooking the valley and agricultural fields. The sunken living room has a large traditional rock fireplace with sliding doors that open onto a porch and level yard. The home is serviced with power, gravity-fed water, septic and has telephone and Internet. Heating is provided by an electric/wood combination furnace in the basement and the large fireplace upstairs providing complimentary heating. On the exterior of the home there’s a well-manicured yard along with fenced garden area.

The ranch has been thoughtfully laid out with efficiency in mind. Additional improvements include hay shed, barn, chicken barns, covered calving area, perimeter and cross-fencing. In addition to the farming operation, the property also has some merchantable timber on the hillsides on the west side of the property; it’s estimated that there are approximately 4,000 m3 of merchantable timber. The owners of recently invested approximately $75,000 on a project in consultation with the BC Ministry of Environment to add riprap to the riverfront and plant additional native plant species to shore up any areas of the riverfront susceptible to erosion. This is a major bonus for any prospective purchaser.

In addition to being picturesque, the Christian Valley is well known for its fishing and hunting opportunities. This ranch is home to healthy populations of whitetail deer, mule deer, elk, wild turkeys and the surrounding Crown land full of many species including moose, cougars, wolves, bears and grouse. The riverfront on this property stretches for over 2 km with several excellent swimming holes and riffles to place a carefully laid fly. The flyfishing for rainbow trout is excellent. It’s a true for season outdoor recreational playground.

Don’t wait to make this your property. Call the listing REALTOR® today for more information or to book a time to go by for a look.

Westbridge sits at a point on Highway 33 where a bridge crosses the West Kettle River. On the north side of the bridge is where you'll find the junction point to the Christian Valley Road and the Kettle River. Christian Valley is approximately 49 km (31 miles) away from Westbridge, northeast along a section of paved to a gravel forestry road.

Westbridge is a very small unincorporated community that has some ranching and farming. At one time there was a general store located here called the Westbridge General Store and Post Office, which was near the site of the old original hotel and post office. The store served for a number of years as the main hub and meeting place for people living in the area.

For people living in Westbridge and Christian Valley area—or if you're camping out—other local shopping, services and entertaining can be done in Rock Creek or in Beaverdell. Here you can find grocery stores, gas, pubs and accommodation. In nearby Midway there is also McMynn's Foods which has a liquor store and lottery sales.

A really popular thing to do in the summer is for people to tube the river from the bridge at Westbridge to the Kettle River Provincial Park. Along the way, near the beginning of the route, you'll pass the confluence of the Kettle and the West Kettle Rivers. Just remember while tubing past farmers' fields that this is private land, so please respect their privacy.

If you do decide to go up the Christian Valley Road and want some adventure, the very remote backcountry gravel road continues to the north. It will eventually reach Highway 6 near the headwaters of the Kettle River approximately 172 km (108 miles) away, just east of Cherryville. There are lots of rustic forest service campgrounds along the way that feature fishing holes.

For rainbow trout fishing, you have a number of options available in the area. There is the Kettle and West Kettle Rivers located right on either side of Westbridge, up the Christian Valley 64 km (40 miles) at Copperkettle Lake—requires a 3 km (2 mile) hike—and Conkle Lake about 16 km (10 miles) away from Highway 33, just north of Westbridge on a steep rough forest service road.

The area offers much more than fishing and is very well known for:

Between the rugged Okanagan Highlands on the west and the snow-capped Monashees to the east, the Boundary Forest District is a patchwork of forests and clearcuts. It is rumpled like an unmade bed and stitched with roads that cut one into the other, headers joining headers and eventually turning into mains that follow ravines down out of the pine crested high country into the irrigated lowlands.

This is deer country where mule deer thrive in the lush second growth, often alongside pockets of whitetails. Travel the lumber roads in the cool of morning or in that magic hour at day’s end and you’ll see them picking their way along the edges of the clearcuts or bouncing across the road ahead of the vehicle. Or, if you just want to see deer, spend some time in the farmlands along the Crowsnest Highway where they gather by the dozens to graze in the fields, often coming right into the towns to help themselves to garden greens and manicured shrubs. Most are mule deer does with their fawns and the odd yearling buck still tagging along by force of habit, but here and there along the river bottoms are bands of whitetails as well.

That same mix of mulies and whitetails prevails in the back country away from the paved roads, the towns and the farmlands. In some places Crown land starts barely 10 kilometres in, other places you might have to travel twice that to reach huntable area. Boundary Creek Road, which starts at the Crowsnest just east of Greenwood, is one of the primary access points, providing access to a vast network of forestry roads from Wallace Creek all the way north to the Terraced Peak and Gable Mountain areas. The Christian Valley Road which follows the Kettle River Valley north from Westbridge also provides access to this high country by way of Lost Horse and Thone Creeks. Christian Valley tends to have more hunting pressure during October when any mule deer carrying antler and any whitetail-antlered or antlerless is fair game (check the regulations to verify since this is subject to change). In September as well as November, mule deer must carry four points on at least one side, not counting brow tines, and only whitetail bucks are legal. 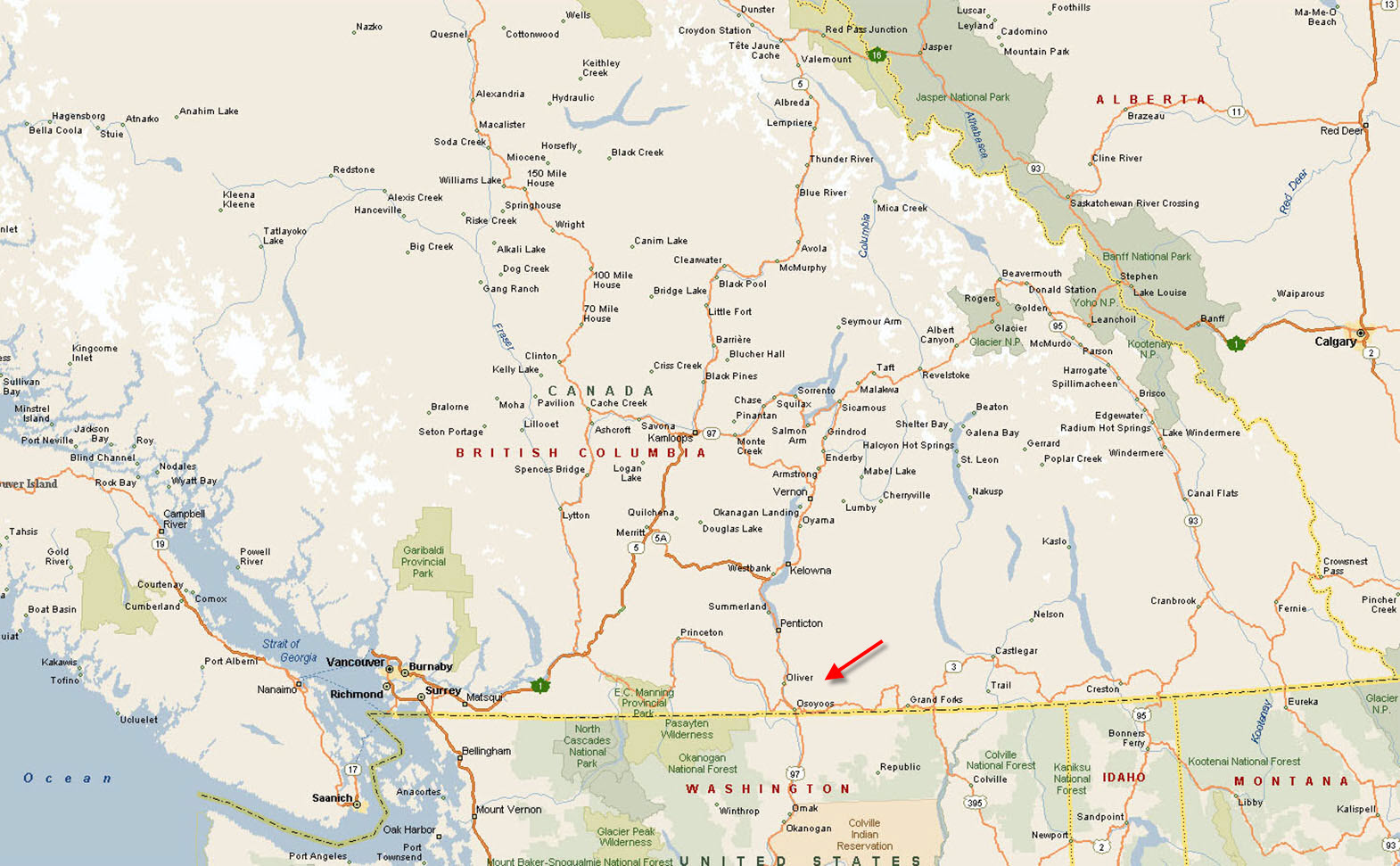 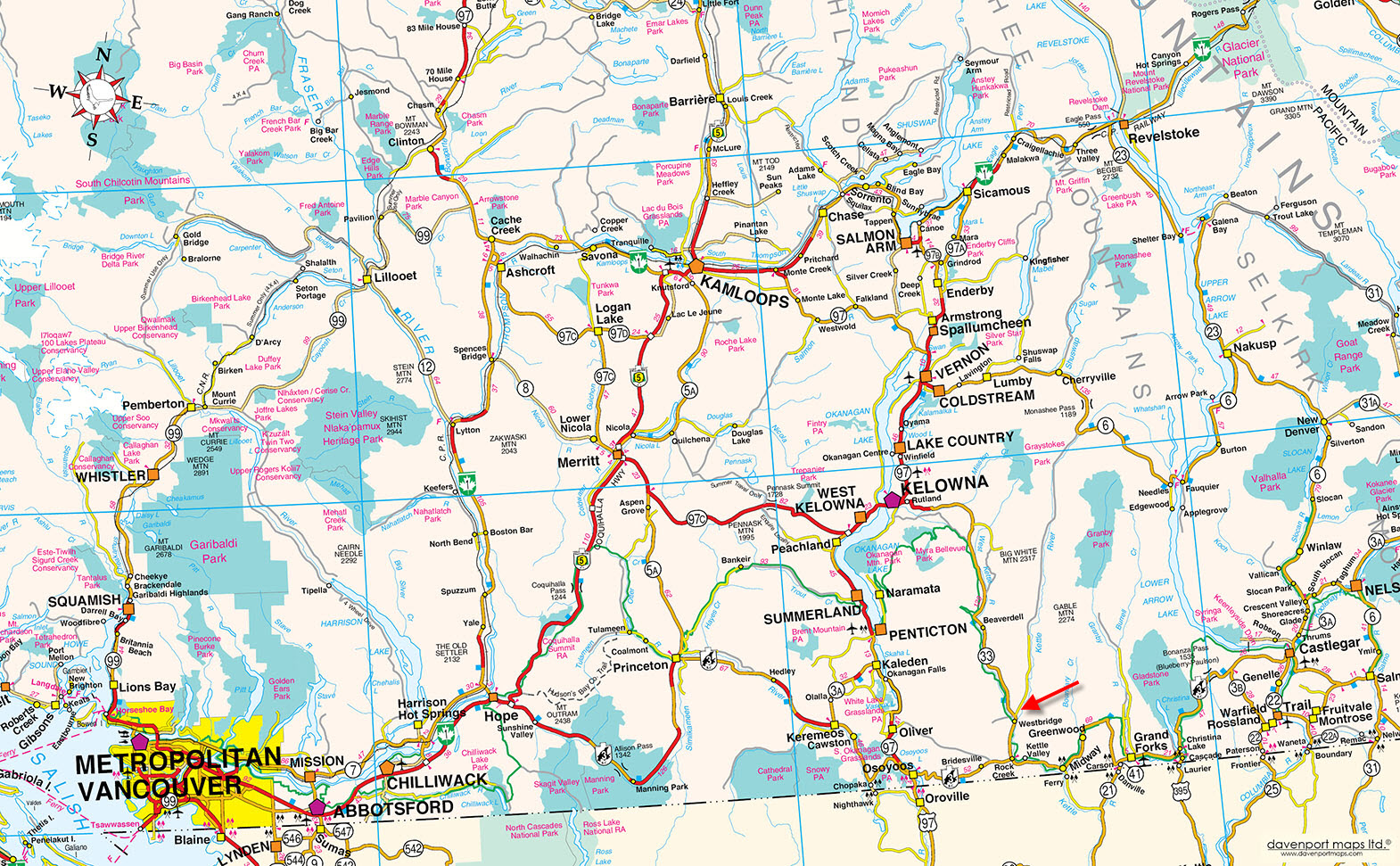 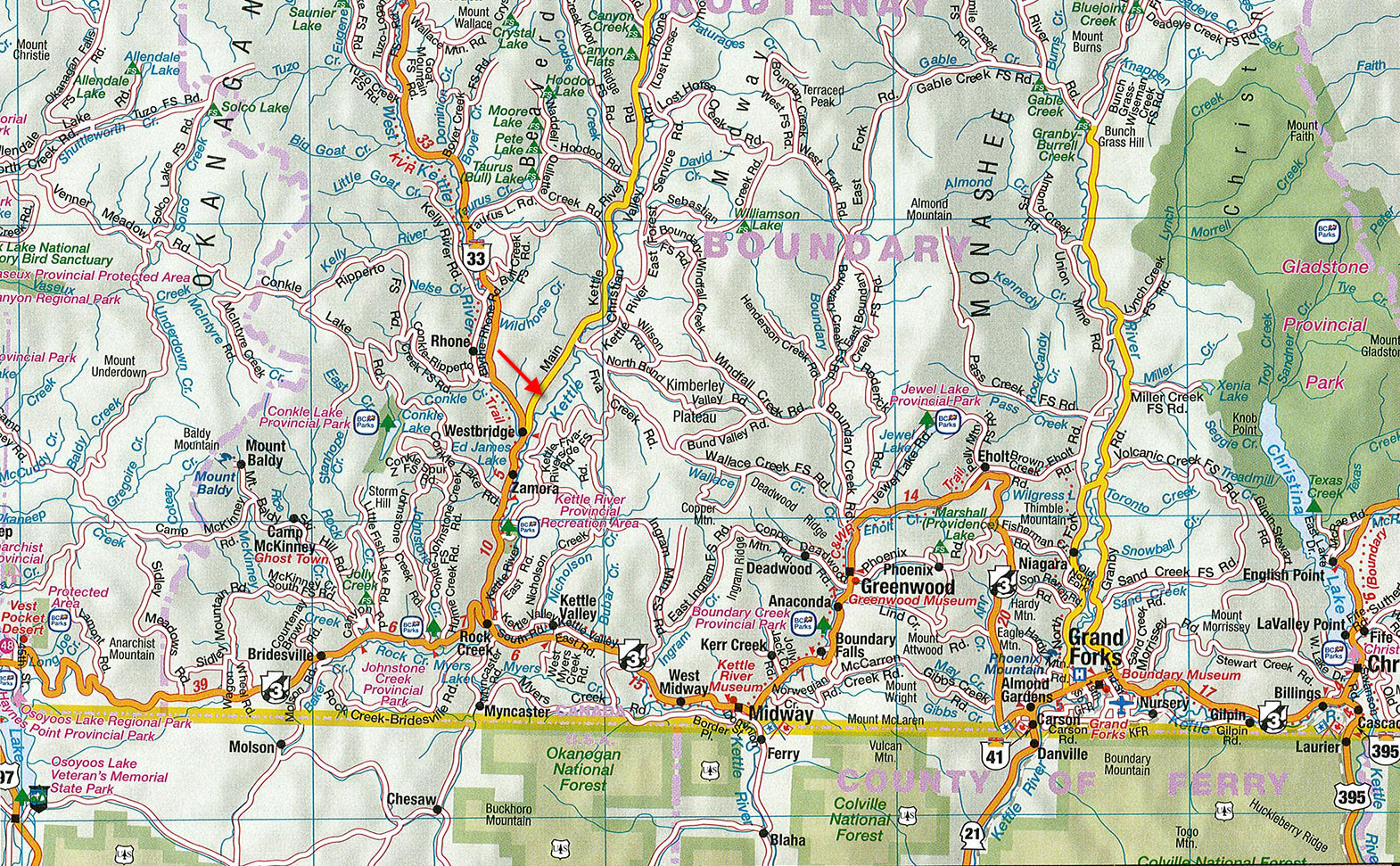 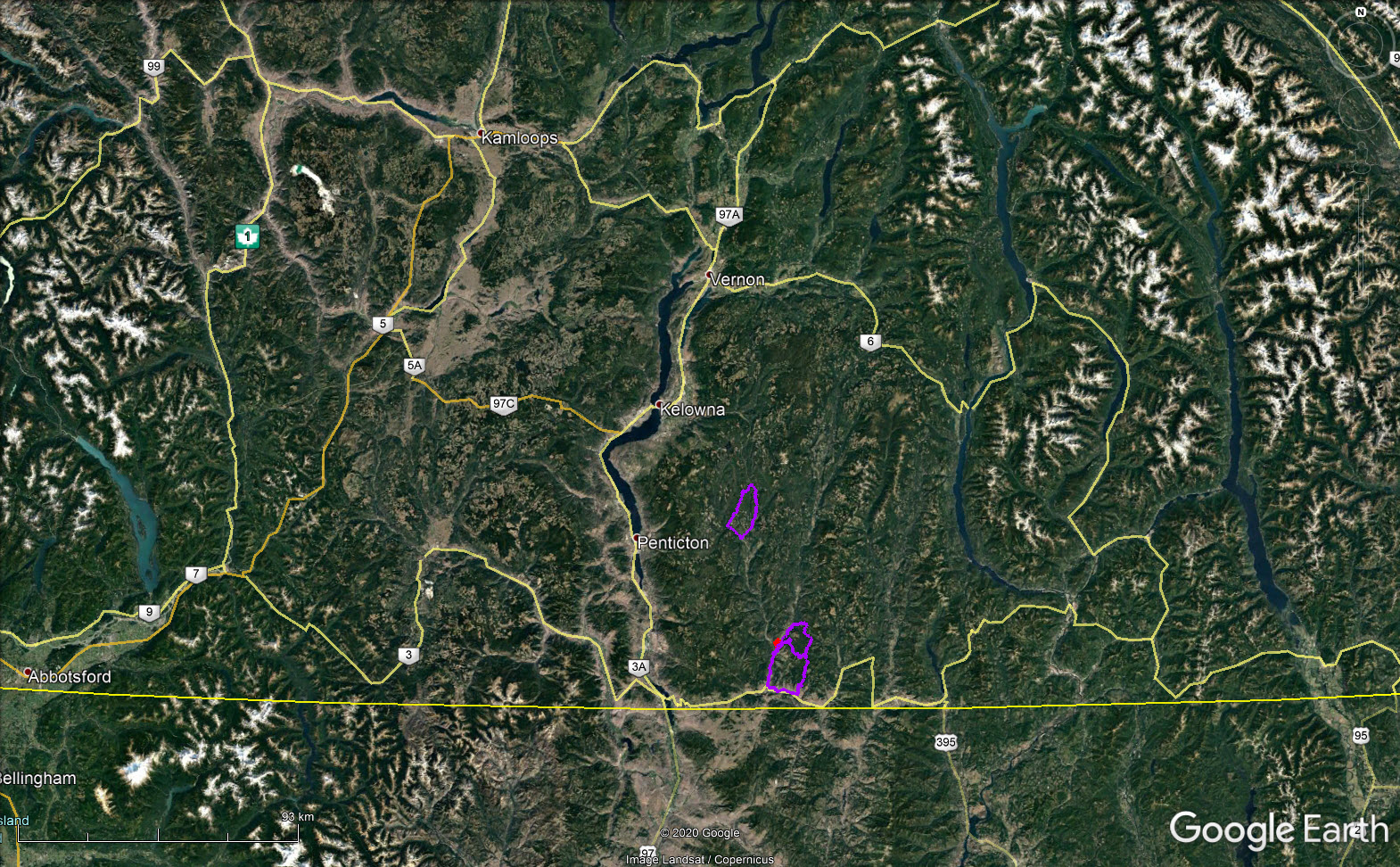 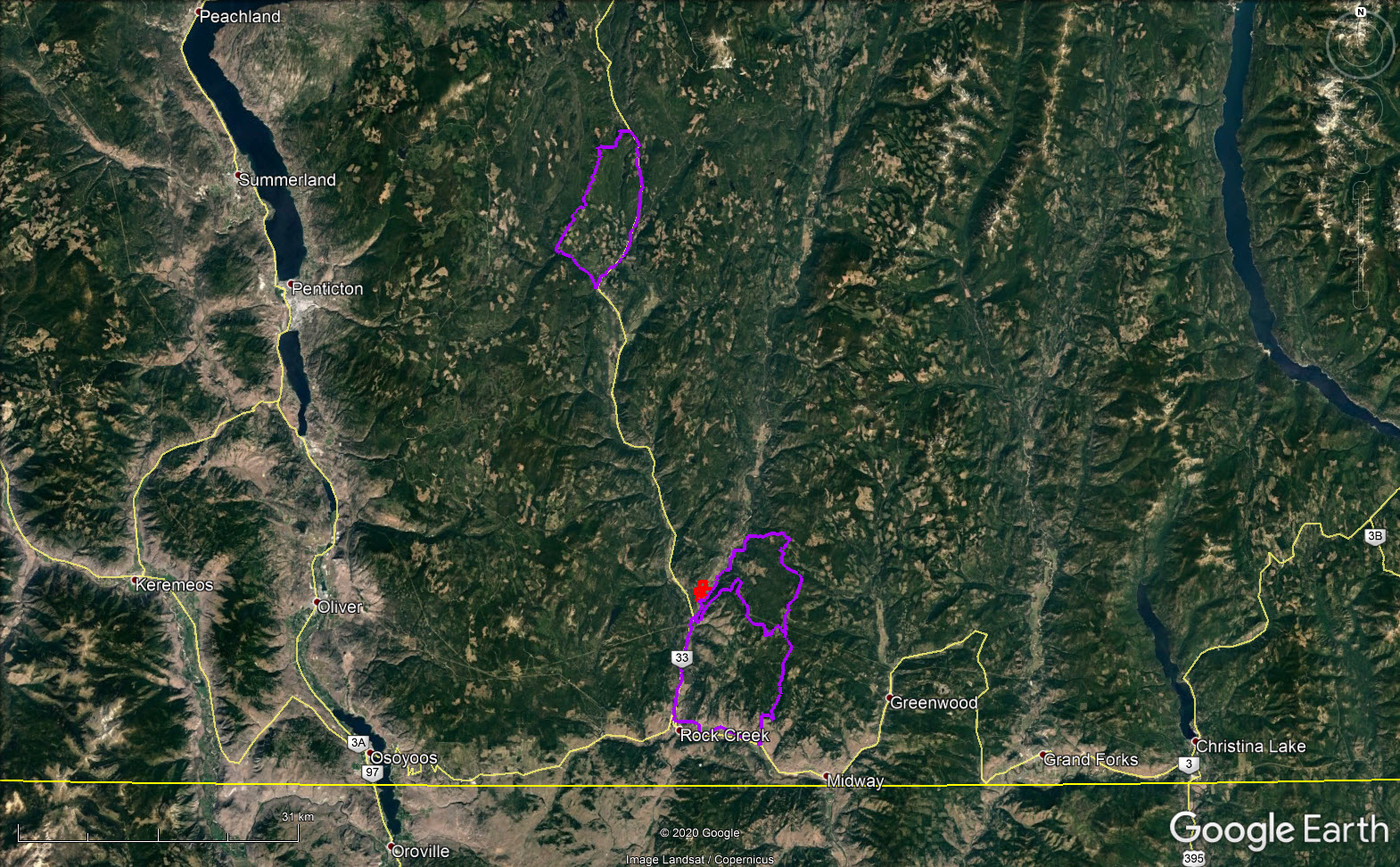 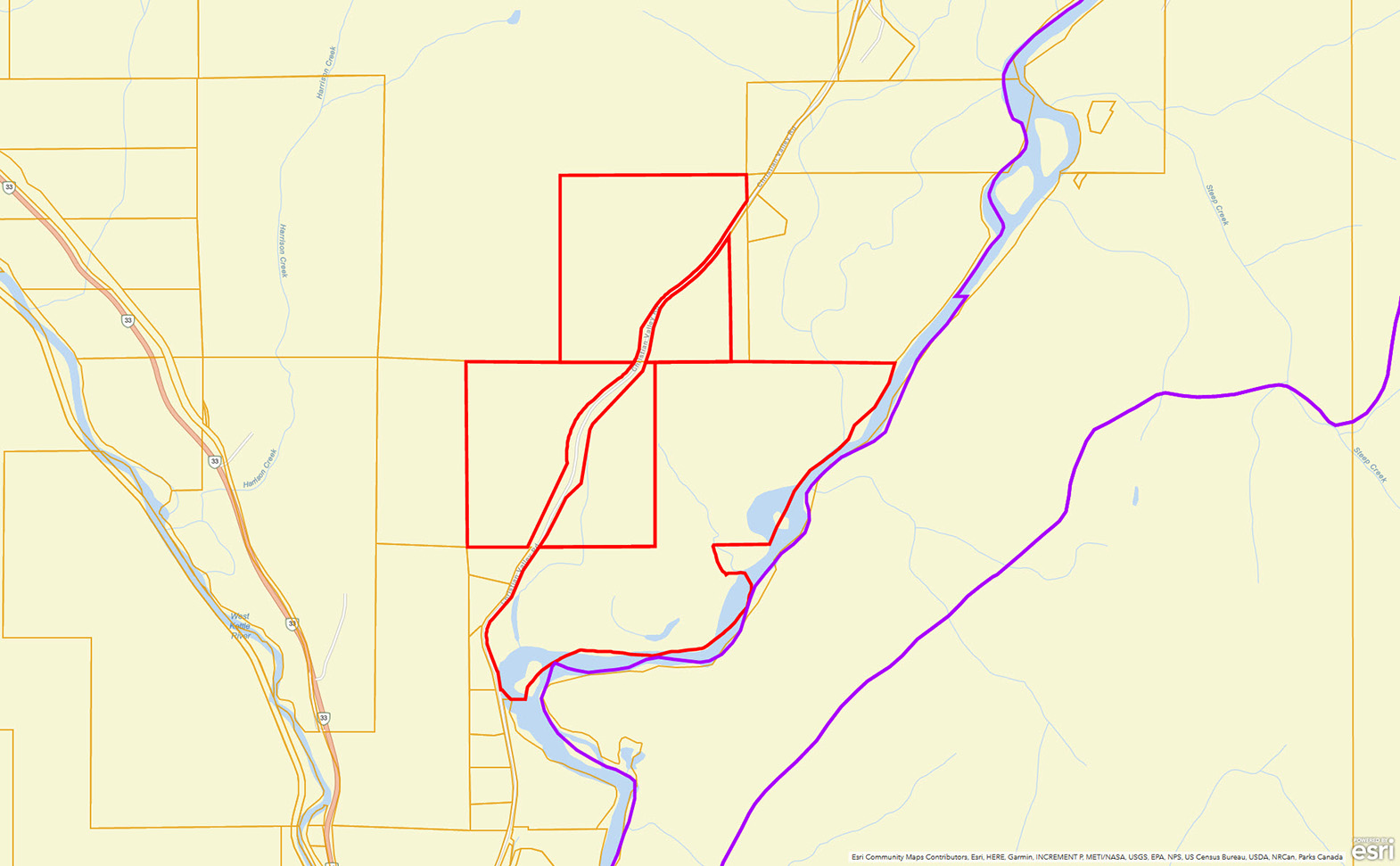 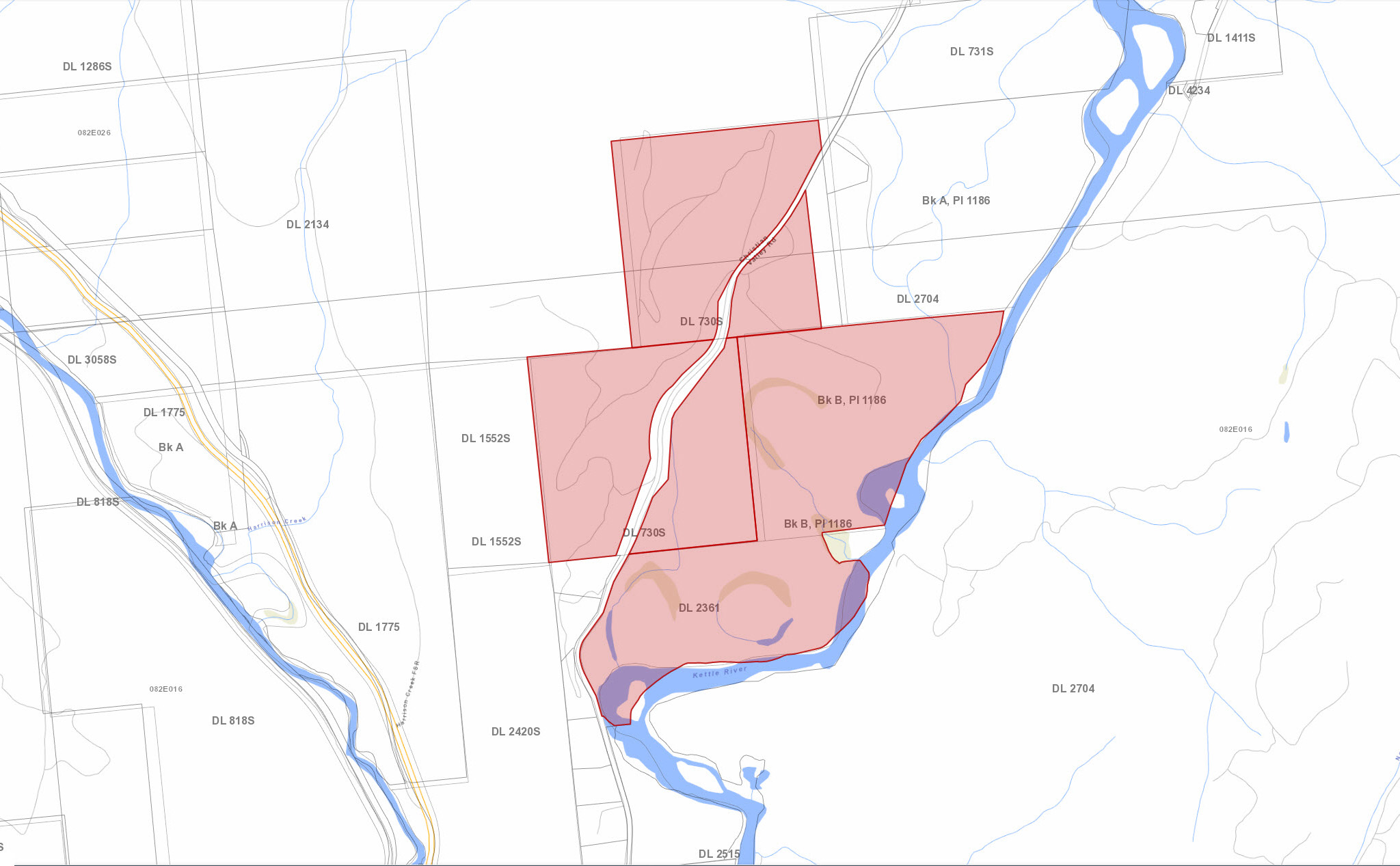