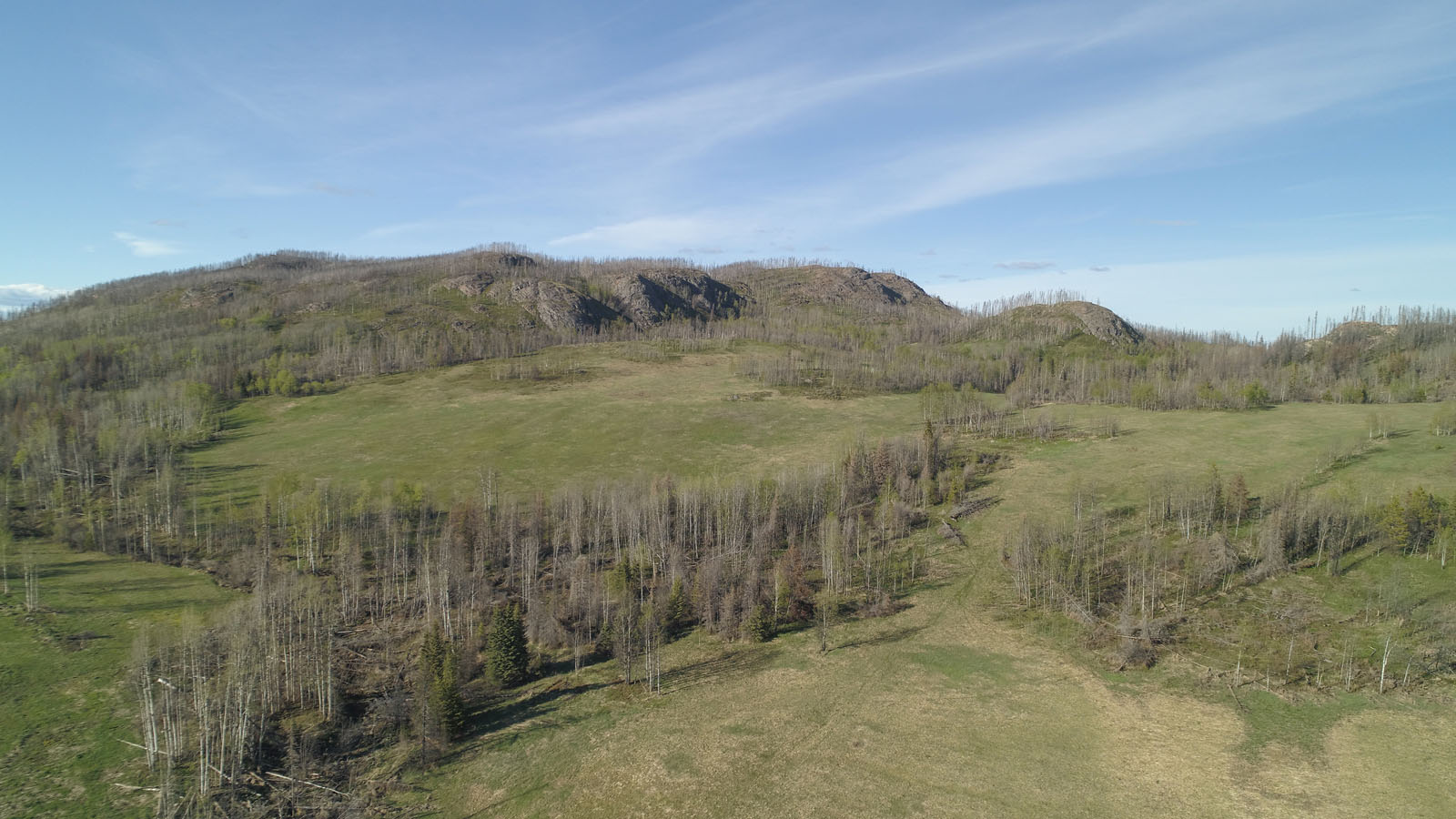 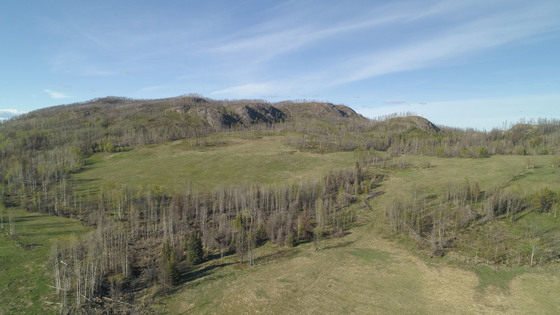 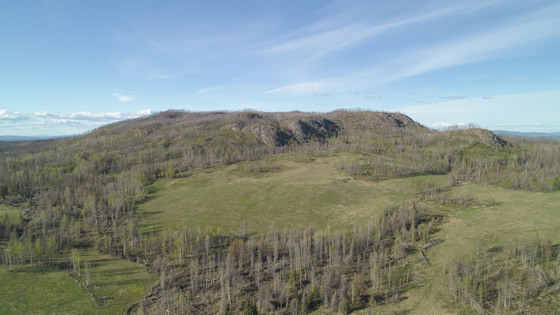 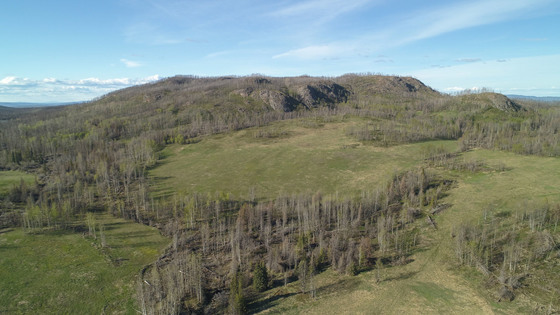 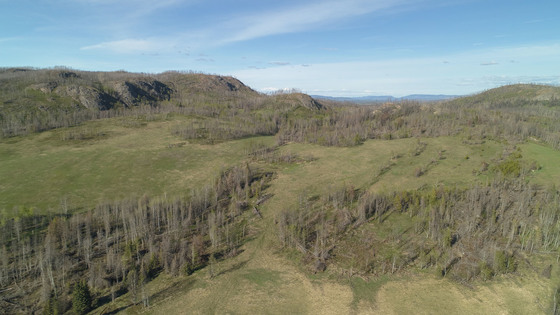 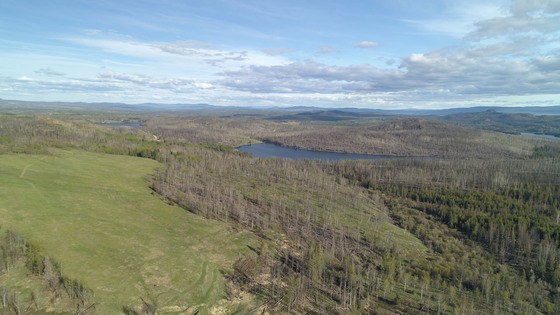 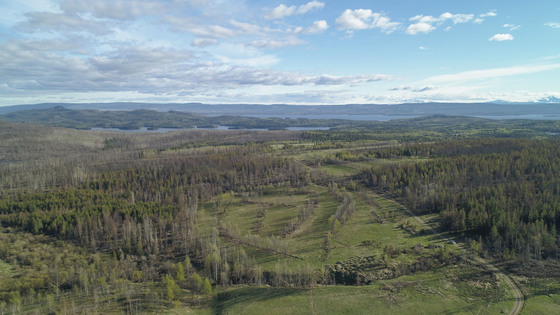 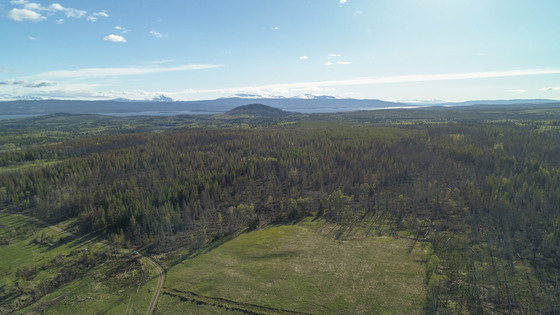 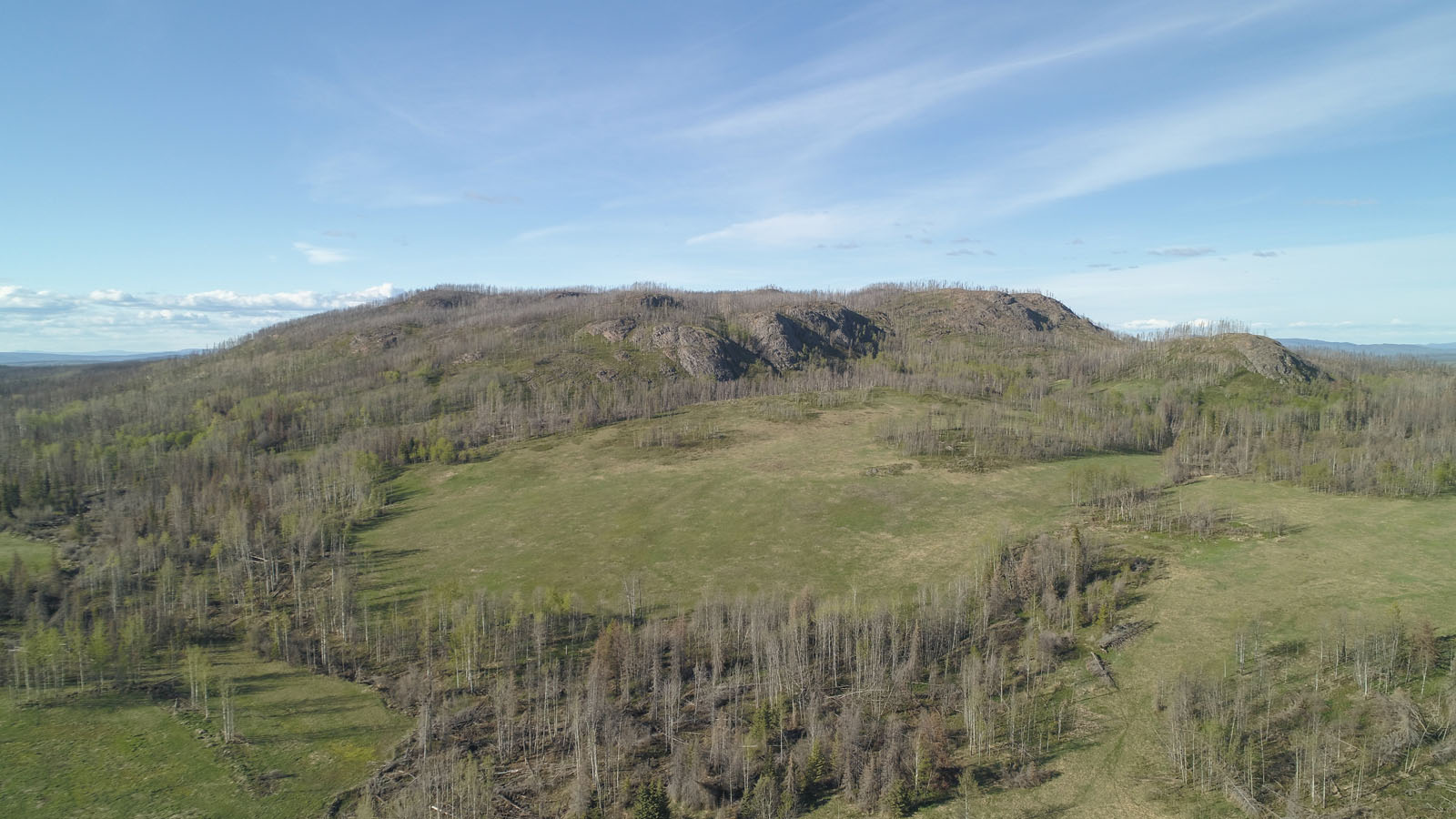 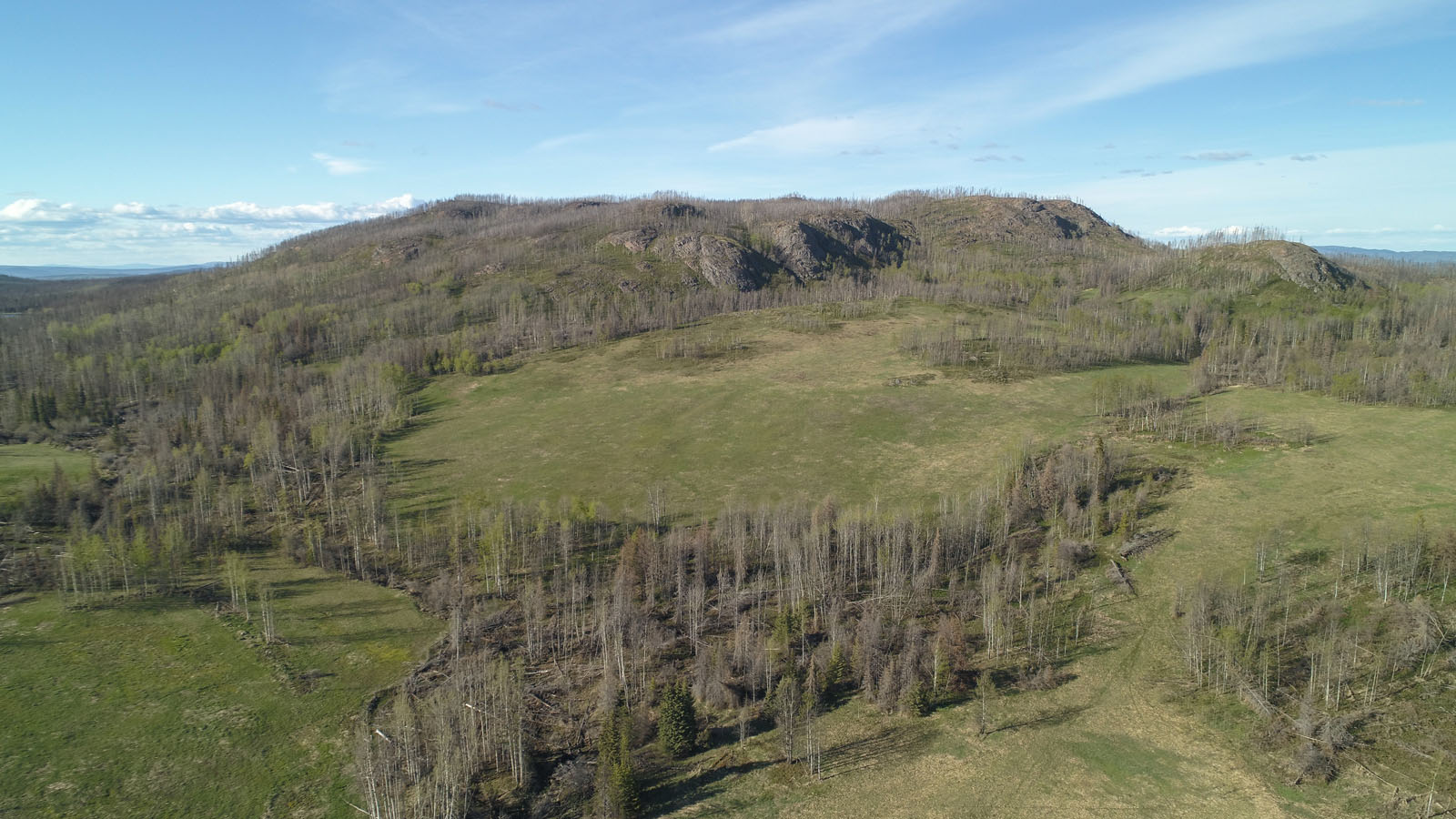 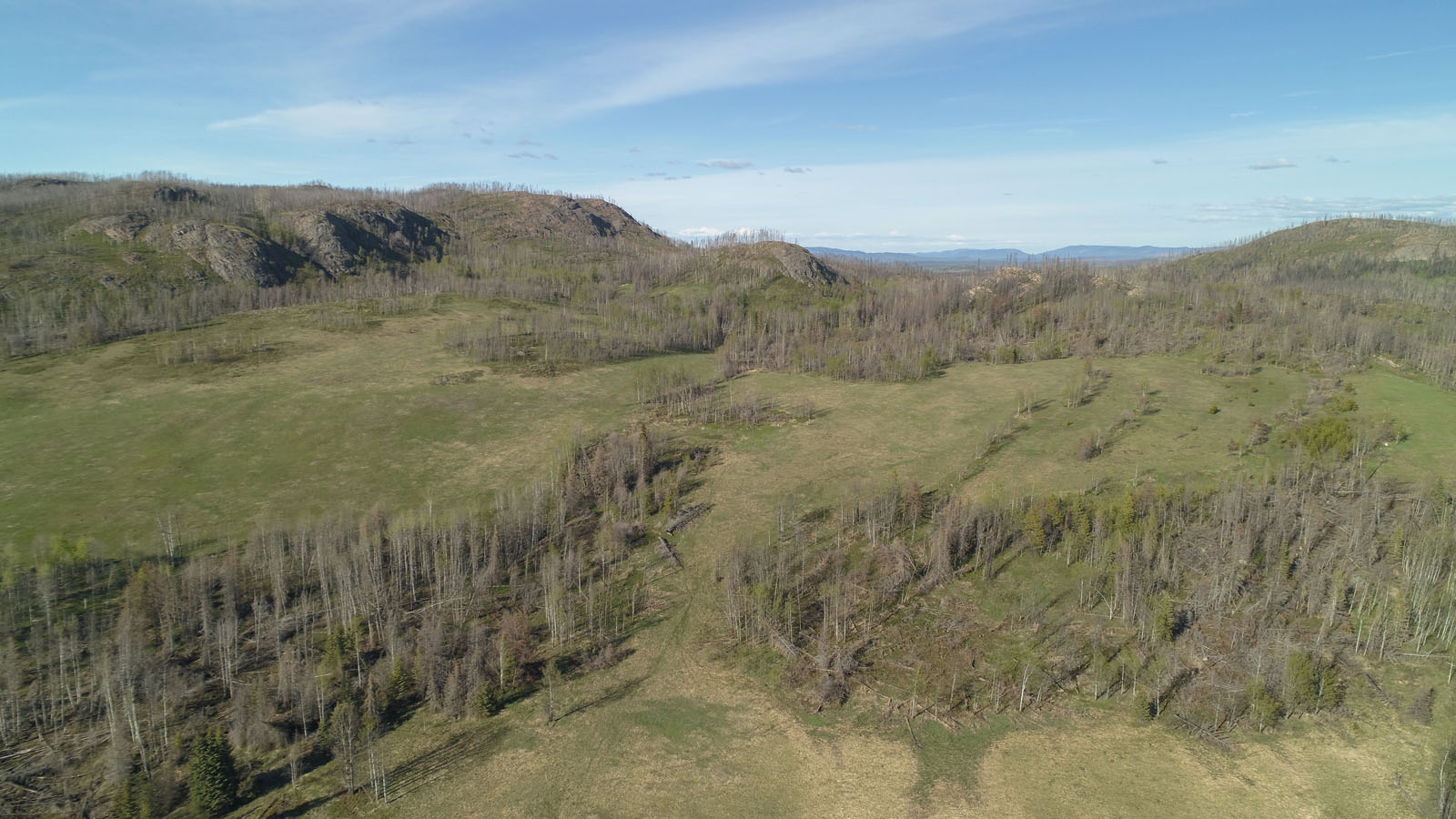 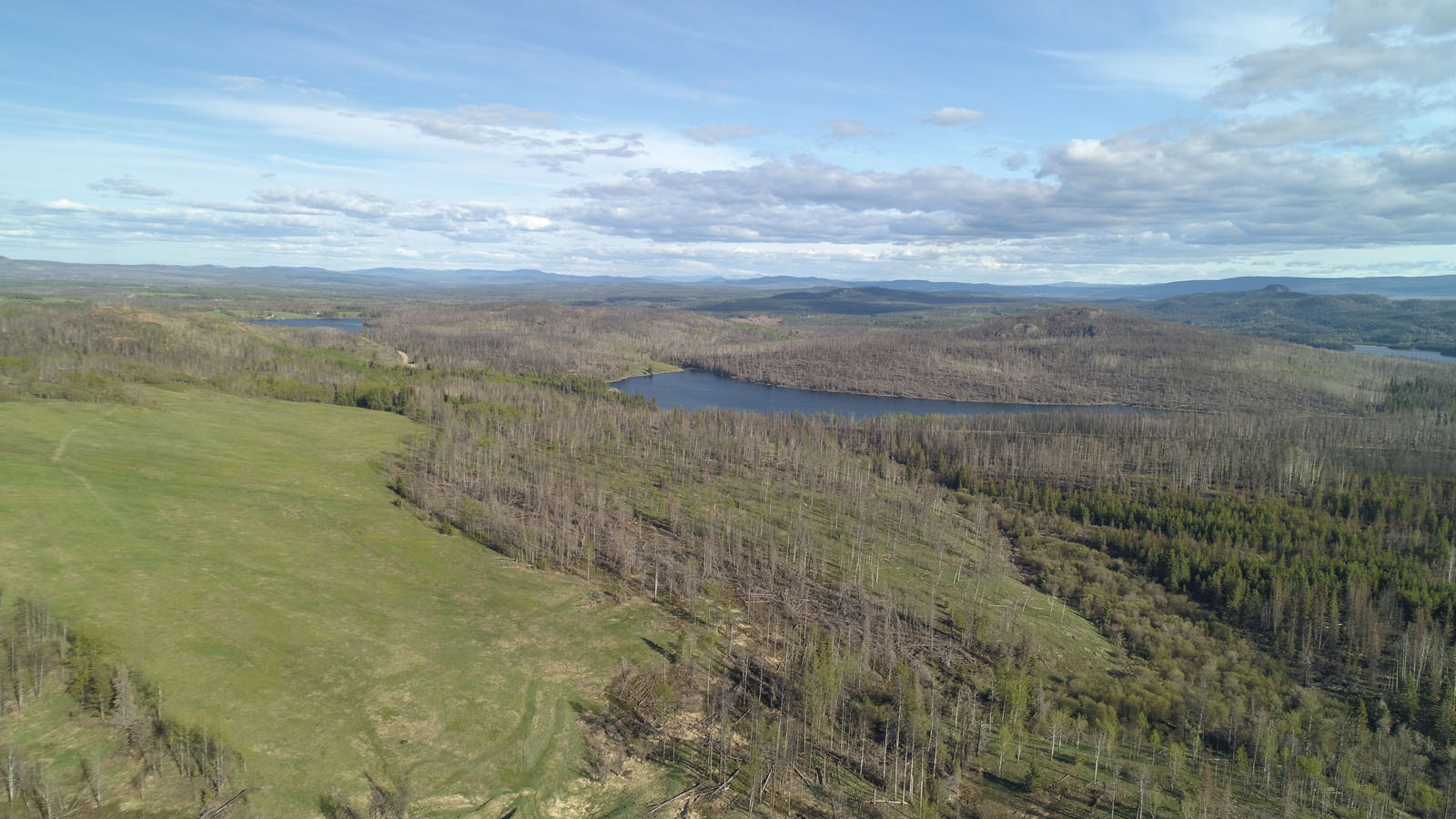 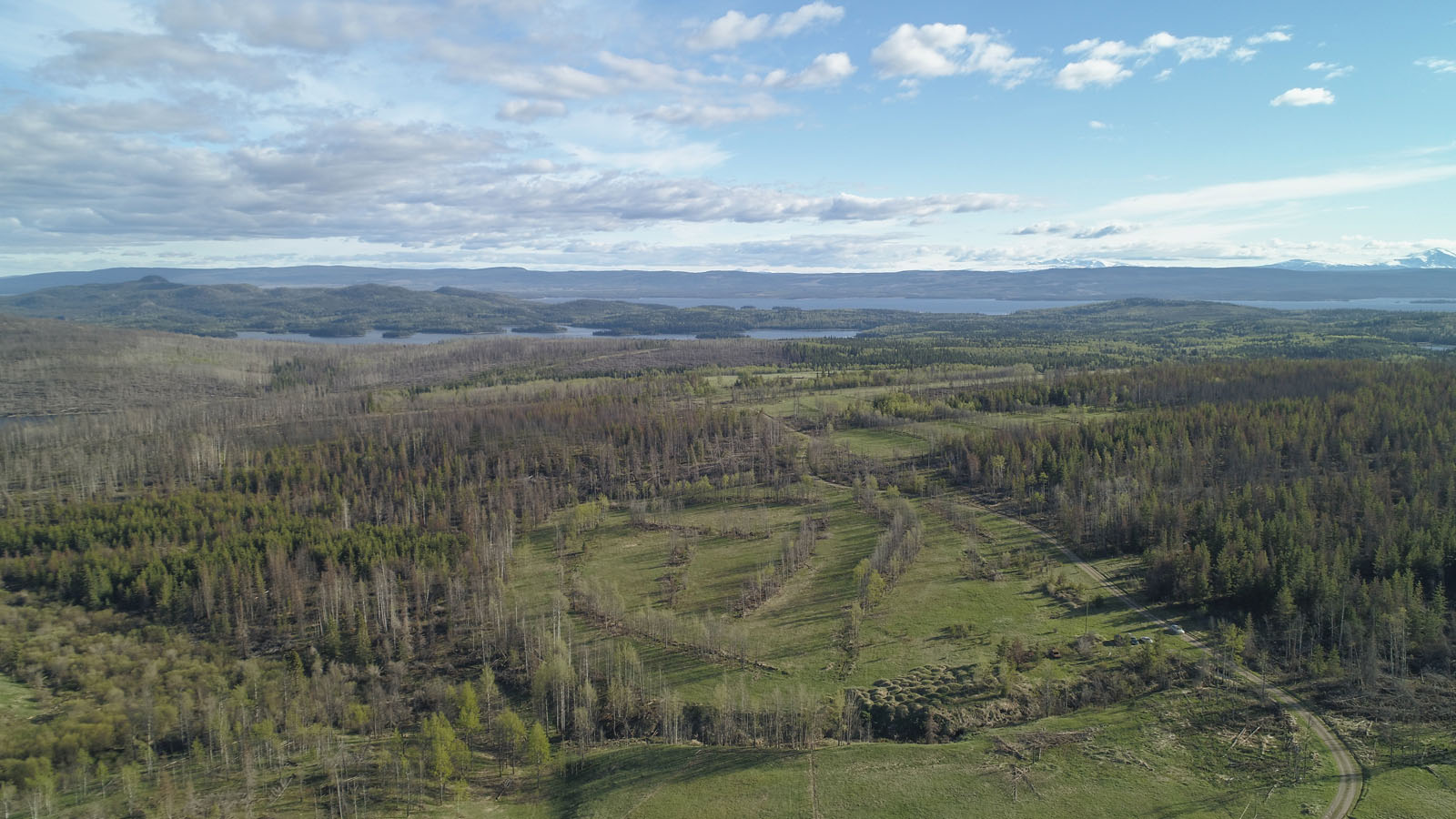 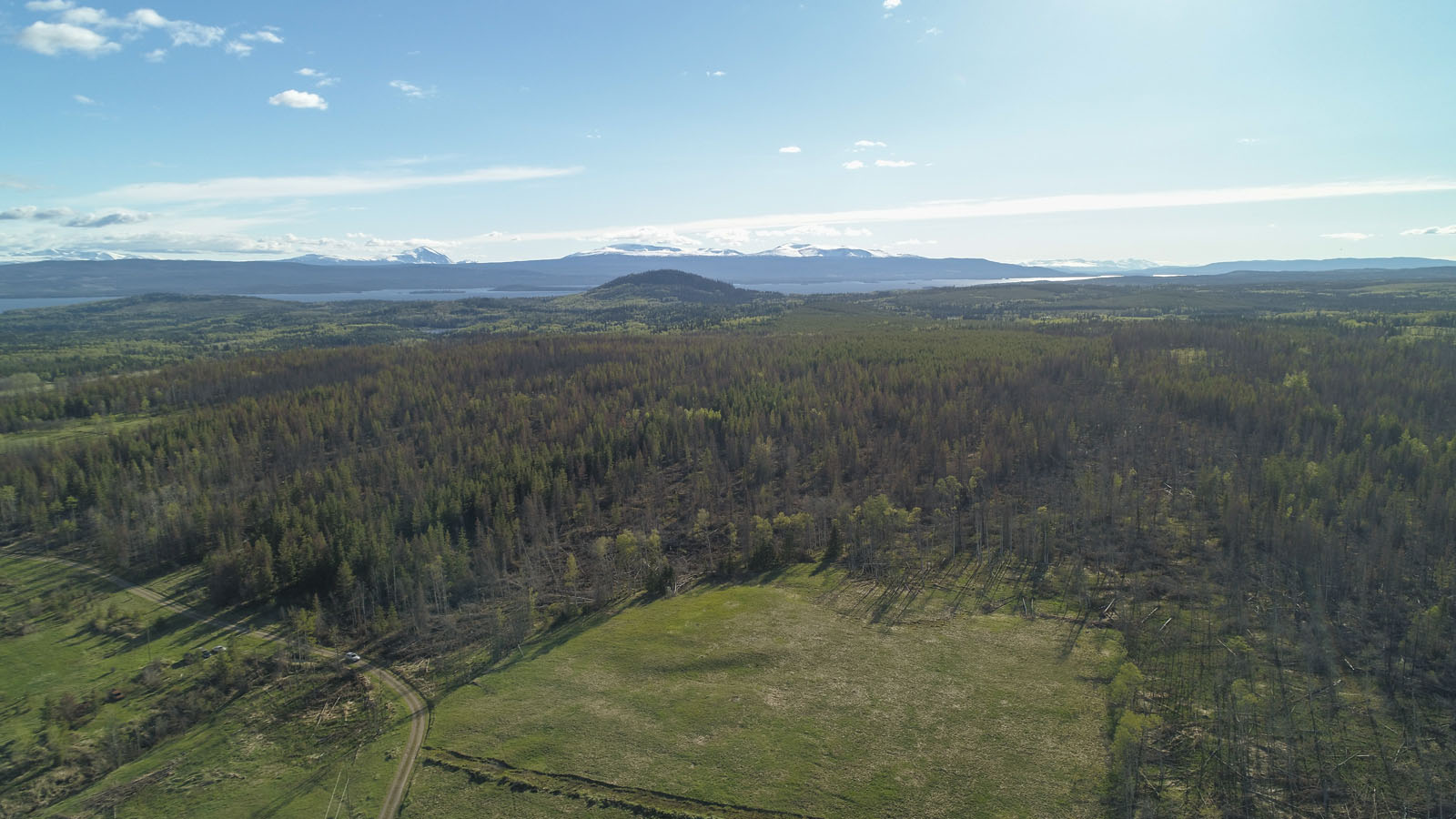 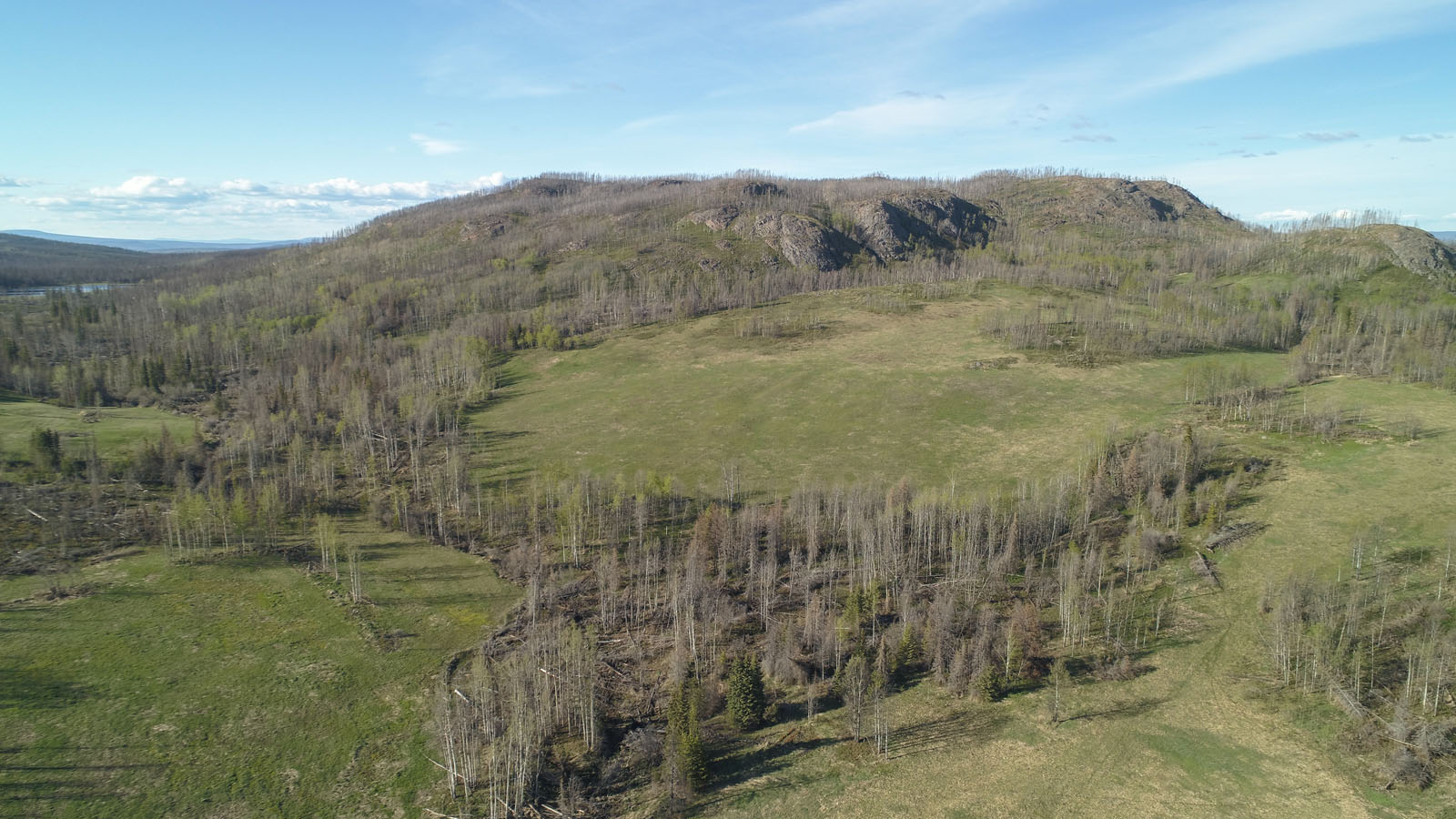 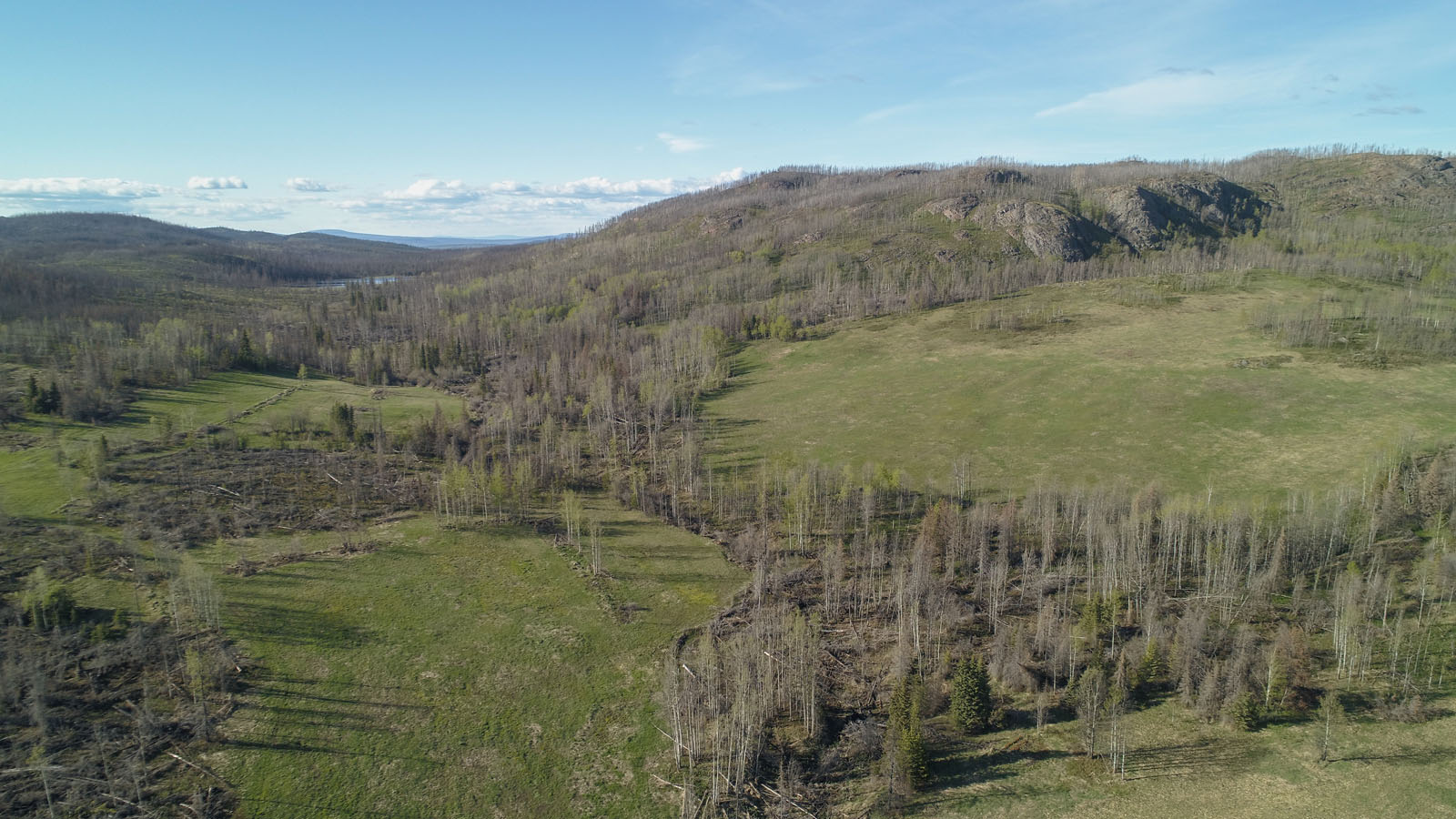 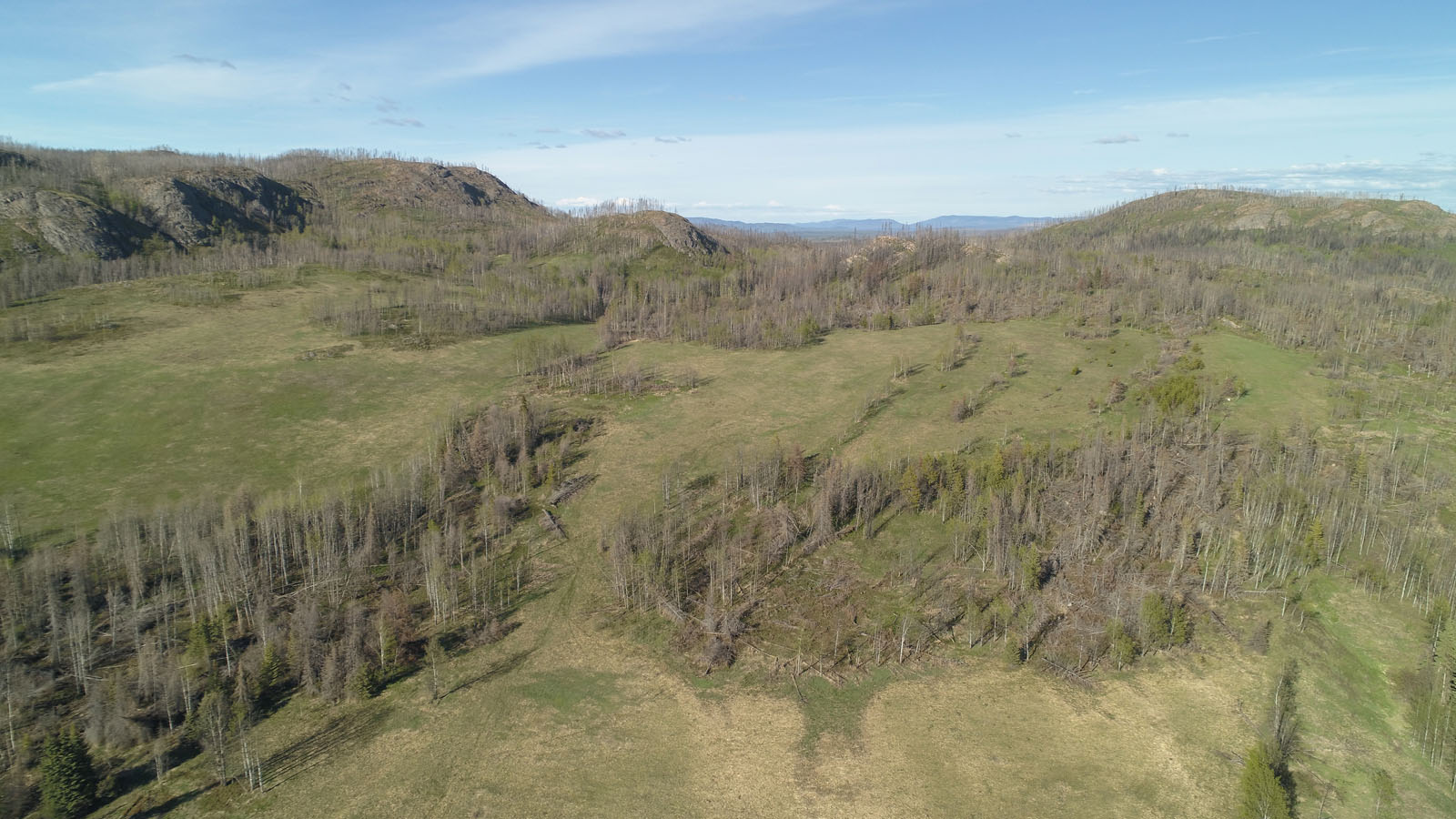 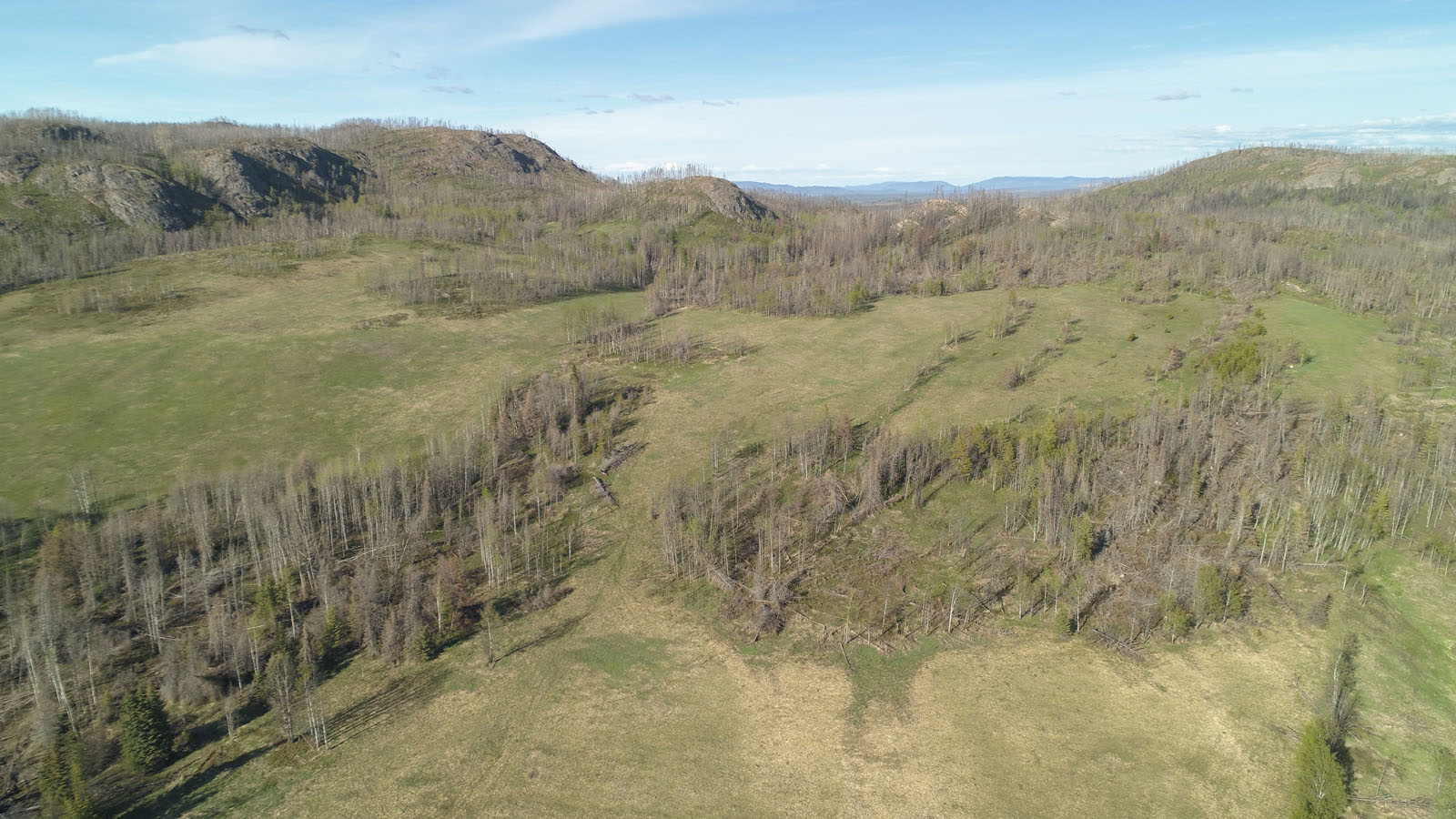 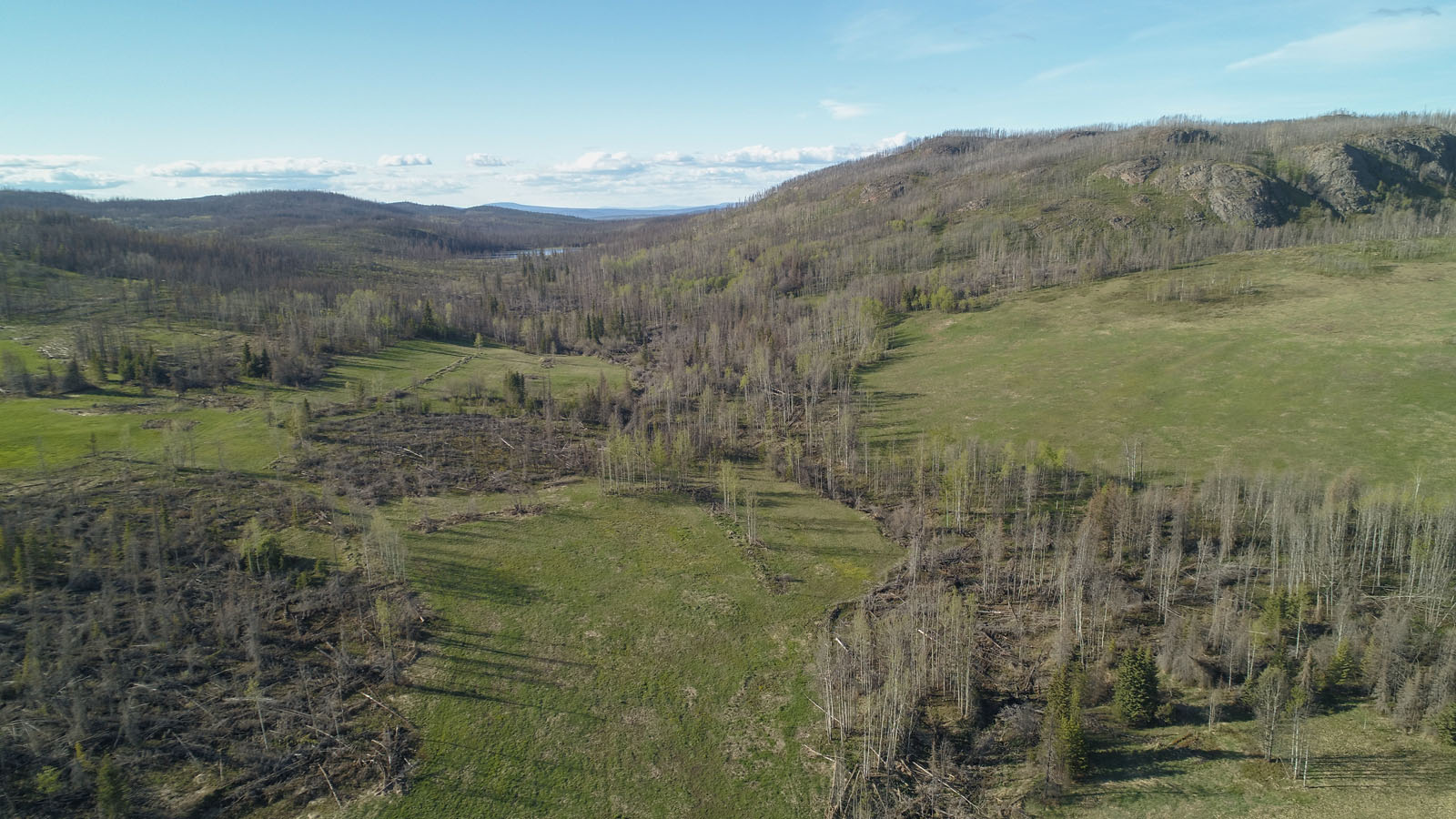 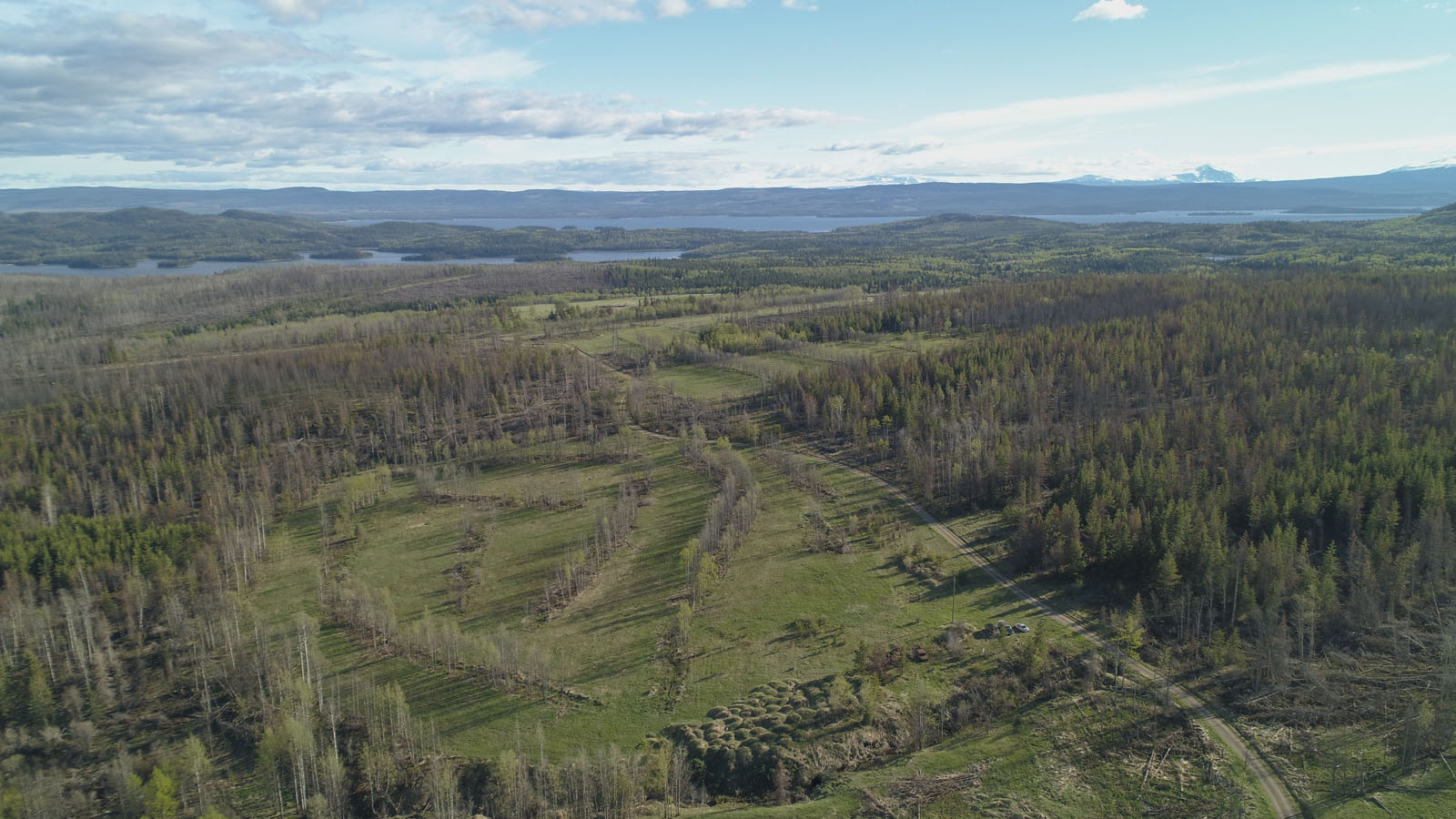 197 acres at Capstone Mountain nestled into this magnificent parcel of land. Sweeping views of Capstone Mountain, Tweedsmuir Park, and Moss, Skins and Ootsa Lakes are a viewscape seldom seen. Lush green fields cover approximately 65 acres and are complemented with mature evergreen and deciduous tree standings. The topography includes grand rock outcroppings within the northeast property line, adding to the diversity and intrigue. Within this remarkable ambiance of tranquillity, there are multiple prime locations for a private residence, cabin, retreat, or hobby farm.

A new, to-be-registered road will easily access the property. A shallow well close to the southern property line serves the adjacent property.

The 2018 Nadina wildfire affected the trees on the property. A timber volume assessment has been conducted showing potential harvesting. Once cleared the property will offer more options for grazing.

Burns Lake serves the surrounding 8,000 residents of the Bulkley Nechako Region. This town is a hub for logging, sawmills, mining and tourism. It also serves as the main commercial centre for surrounding areas, including Francois Lake, Colleymount, Grassy Plains, Rose Lake, Topley, and Granisle. This bustling town has pubs, many cafes and restaurants, numerous accommodation options, a library, museum and a new hospital. There are three K-7 schools, one K-12, an 8-12 and the College of Northern Lights. Burns also serves as the head office for the Regional District of Bulkley-Nechako.

The Lakes District encompasses Babine Lake and, at 177 km, is the longest natural lake in BC. Just south of Burns Lake, Francois Lake is the second-largest natural lake in BC at 110 km in length. The Lakes District Circle Tour is an excellent way to experience the scenic greater area. The route from Burns Lake heads south on Highway 35 to Francois Lake. After a ferry crossing to Southbank, it continues southward to Ootsa Lake before turning westward, through Wistaria, to the western tip of Francois Lake and the Nadina River. Colleymount Road follows the lake and back to Burns Lake.

The average winter snowfall is approximately 190 cm. For the month of June 1982, Burns Lake recorded 376.5 hours of sunshine which is the most ever recorded in BC. The warmest month is July, with typical temperatures around 21°C. At an average of -15°C, the chilliest month is January.

The Nechako Reservoir was created in the early 1950s with the completion of the Kenney Dam. The dam merged Ootsa Lake with many other lakes, forming the Reservoir. Close to the property, Skins Lake, just north of Ootsa Lake near the original headwaters of the Cheslatta River, was also joined to the Nechako Reservoir. At Skins Lake, the Reservoir's spillway allowed excess water to release into the Cheslatta River. Skins Lake is considered the source of the river. The river generally flows east and slightly south. Moxley Creek and Dog Creek join from the north, after which the river widens into the long but relatively narrow Cheslatta Lake. The river flows a few kilometres cascading over falls to join the Nechako River.

The Lakes District is a recreational nirvana with countless lakes, Provincial Parks and Forest Rec Sites.

Tweedsmuir Park, BC’s largest Provincial Park, aside from offering some of the most spectacular scenery in North America, is a magnet for outdoor recreationists. Favourite activities sought out include fishing, hunting, hiking, horseback riding, camping, and canoeing. Water access from Ootsa Lake Reservior provides the most common access to the park, although floatplanes and heli charters can be organized from Burns Lake.

The Lakes District is known for its 3,000 miles of pristine lake shoreline. Rivers and lakes are brimming with trout, salmon, and pike, among other species. Whether fly fishing, spinning or baitcasting, the chance of landing a fish is excellent.

Separated from Ootsa Lake by the Skins Dam, Skins Lake contains several small islands which provide plenty of structure for the burbot, rainbow trout and whitefish that inhabit the lake. Ootsa Lake forms the northern boundary of Tweedsmuir Provincial Park. A gravel road runs along the north shore of Ootsa Lake through ranches, farmlands and forests of aspen, spruce and pine trees. The remarkable views and pretty scenery never end, and the wildlife is plentiful. Fishing in Ootsa Lake is excellent for large rainbow trout and lake char.

The lakes and rivers in the area offer up an immense amount of options. There are also numerous boat launches to waterski, wakeboard, explore, canoe, kayak, paddleboard, and windsurf. Countless trails weave their way through the District. These vast trails showcase breathtaking views of lakes and rivers, flower and fauna, meadows and mountains and wildlife.

A few minutes from Burns Lake, a world-class mountain biking trail system—The Burns Lake Mountain Bike Park. Arguably, these trails provide some of the best downhill in the world. Courses range from easy to advanced and adrenaline-pumping expert rides.

Omineca Ski Club has a long tradition of cross-country skiing and biathlon, claiming proudly to be the oldest ski club in BC and possibly Canada. There are many groomed trails ranging from easy to moderate degrees of difficulty. The Burns Lake Snowmobile Club also maintains plenty of marked trails and mountain ranges to snowmobile.

This property is located close to large tracts of open Crown land, with public access for horseback riding, quad and ATV use, as well as snowmobiling in the winter.

Burns Lake and the Francois Lake area’s first inhabitants were the Carrier First Nations communities that spanned much of the Lakes District and beyond. Burns itself began as a small rest stop for travellers on their way to the Yukon Gold Rush. Many of these travellers saw an opportunity in the rich forestry, fur, and mining potential in Burns Lake and the surrounding area.

Burns Lake acquired its name after Michael Byrnes, who was an explorer for the Collins Overland Telegraph. Byrnes passed Burns lake in about 1866 while surveying a route from Fort Fraser to Hagwilget. Research suggests that Byrnes was also a miner during the Cariboo Gold Rush and had staked a claim on William’s Creek earlier, in 1861. On an 1866 trail map of the area, the name 'Byrnes' Lake appears. After 1876 the charts renamed it Burns Lake.

Bob Gerow, one of the principal founders of Burns Lake, created Burns Lake Trading Company in partnership with Jack Seely and Howard Laidlaw. Together, they built a store/hotel and a sawmill on Gerow Island (a small island on Burns Lake), which become the hub of trade for the surrounding area. A bridge connected the island to the mainland, and the Village was incorporated on December 6, 1923.

The town continued to grow throughout the 20th century. Its current industries have become forestry and tourism, though many workers commute to jobs in the mining industry.

Several historic buildings still stand, including The Old Hospital. It was built in 1933 by the Women's Missionary Society of the United Church of Canada. Once the most extensive and finest public buildings between Prince George and Prince Rupert, it was famous for its fine gardens. Senior citizens later occupied it as an apartment complex, then declared a heritage building in 1982 and redeveloped it as an office building by its owner, the Burns Lake Native Development Corporation.

Located adjacent to the Burns Lake Museum, a square-cut log building is a former fur trade post that later became a gambling den. Due to the nature of gambling, fights broke out in the building, earning its name, Bucket of Blood. It now contains a display of historical artifacts from Craig Wafflehouse's life, one of the founders of Burns Lake.

Before the Nechako Reservoir was completed, the river's course was a small, meandering stream through swamps and meadows north and east of Ootsa Lake. Its lower reaches were called Murray Creek.

The river was dramatically altered due to the Kemano Power Project, which diverts water from the Nechako River basin to the Pacific Ocean to provide power for an Alcan aluminum smelter in Kitimat. In the early 1950s, Kenney Dam was constructed on the Nechako River, a short distance upriver from the Cheslatta–Nechako confluence, creating the Nechako Reservoir. A 16 km long tunnel was blasted through the Coast Mountains, connecting the Nechako Reservoir to a hydroelectric powerhouse at Kemano. Transmission lines were built to carry the electricity 82 km to the Alcan company town of Kitimat.

Electricity and telephone nearby. 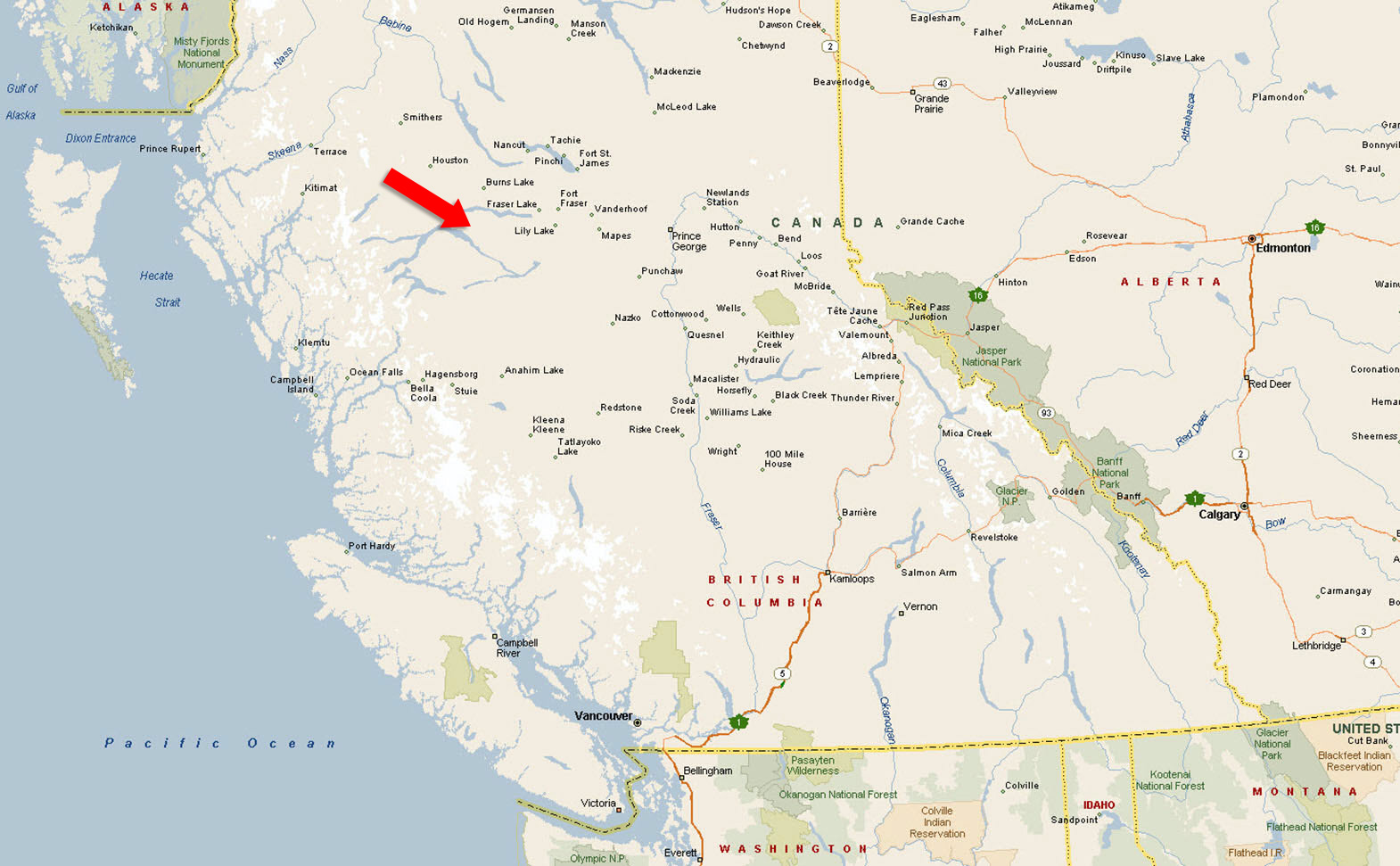 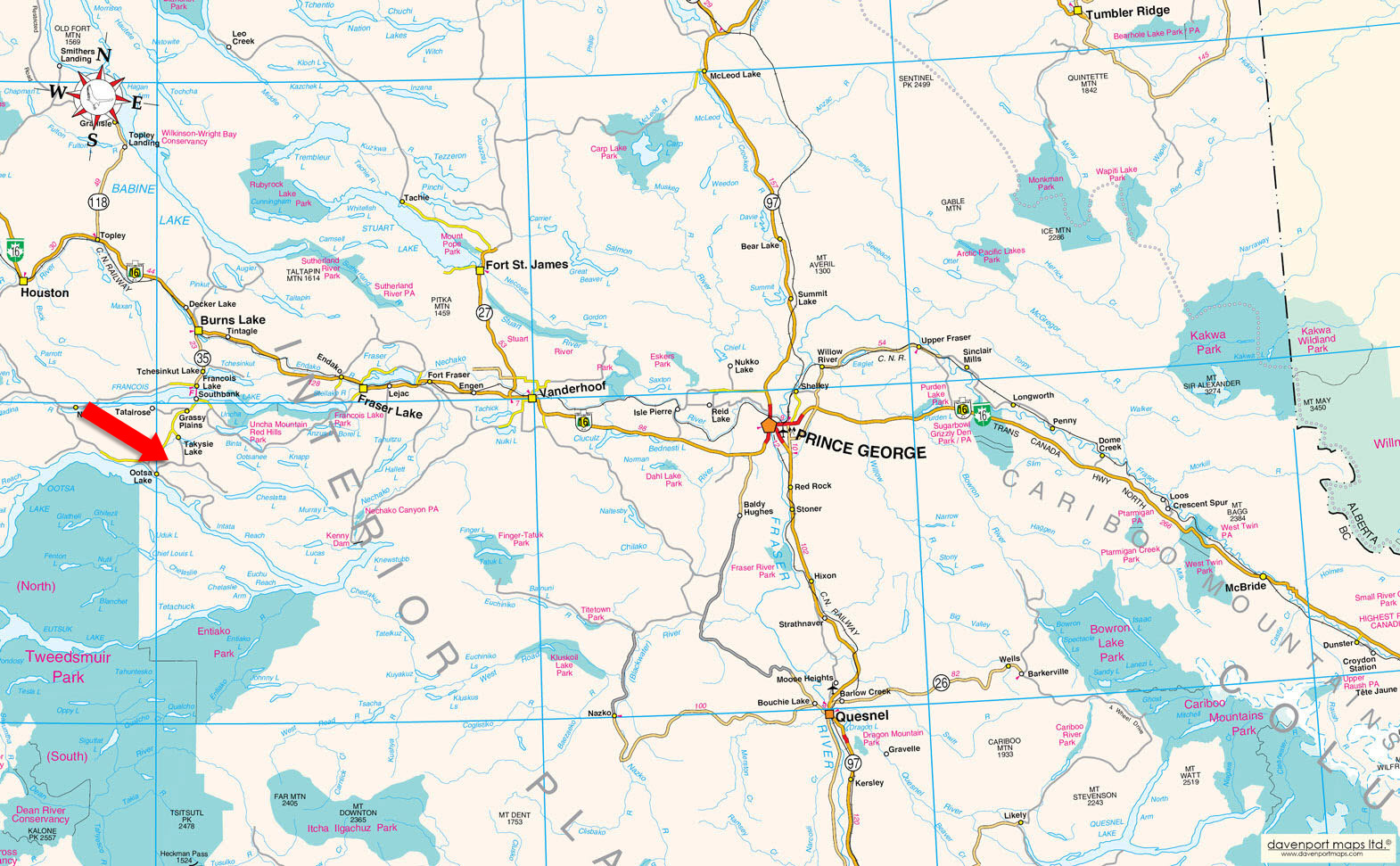 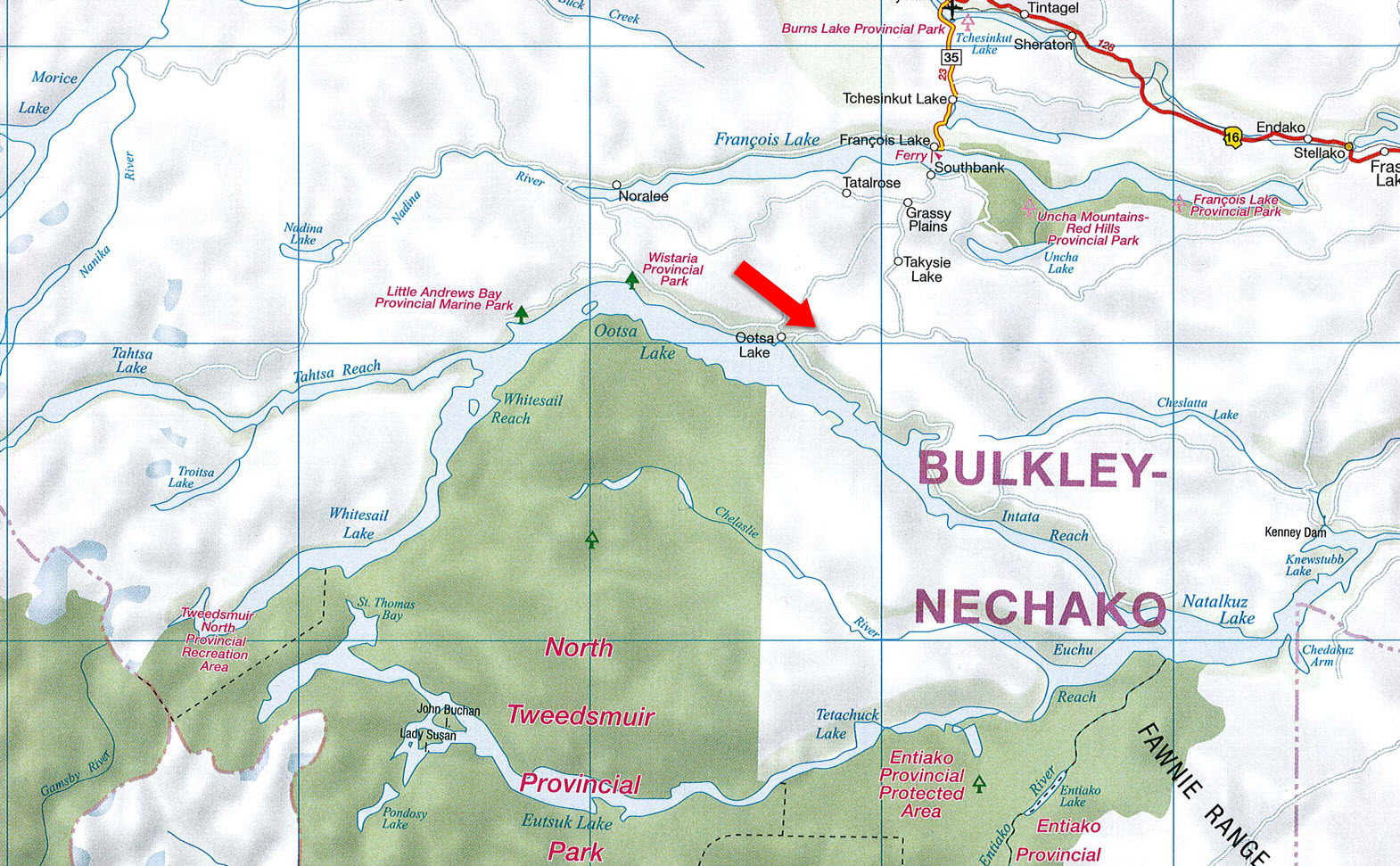 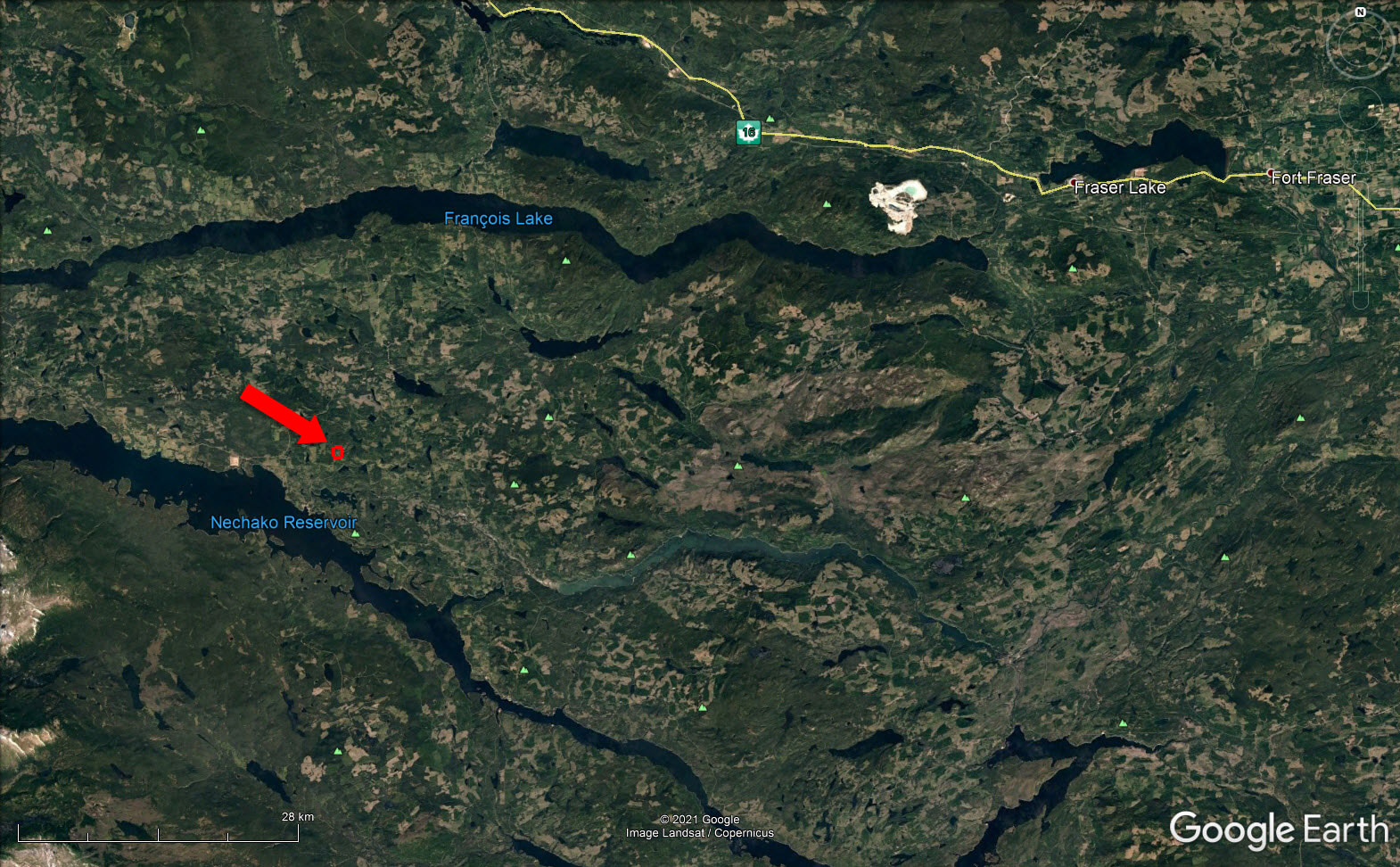 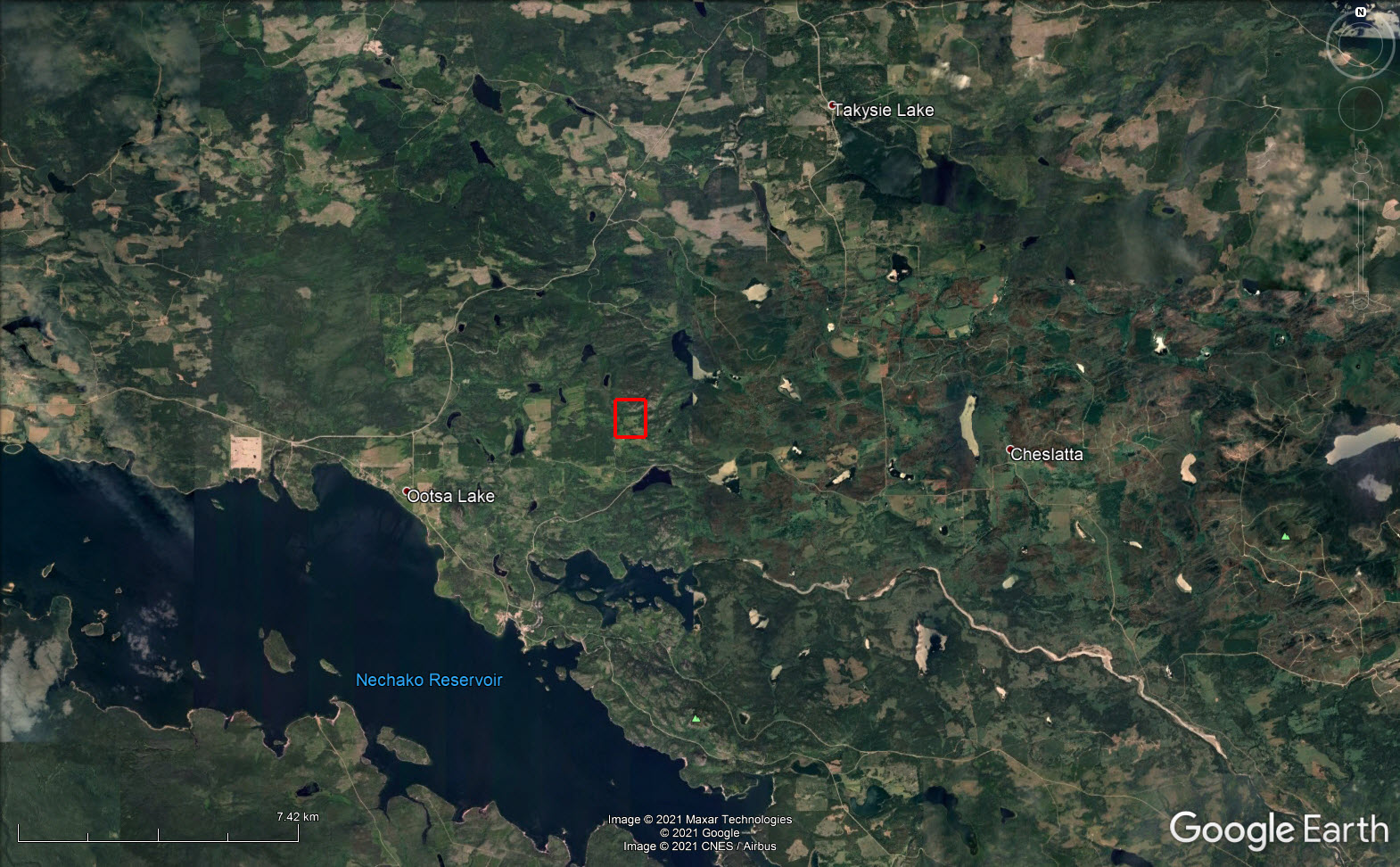 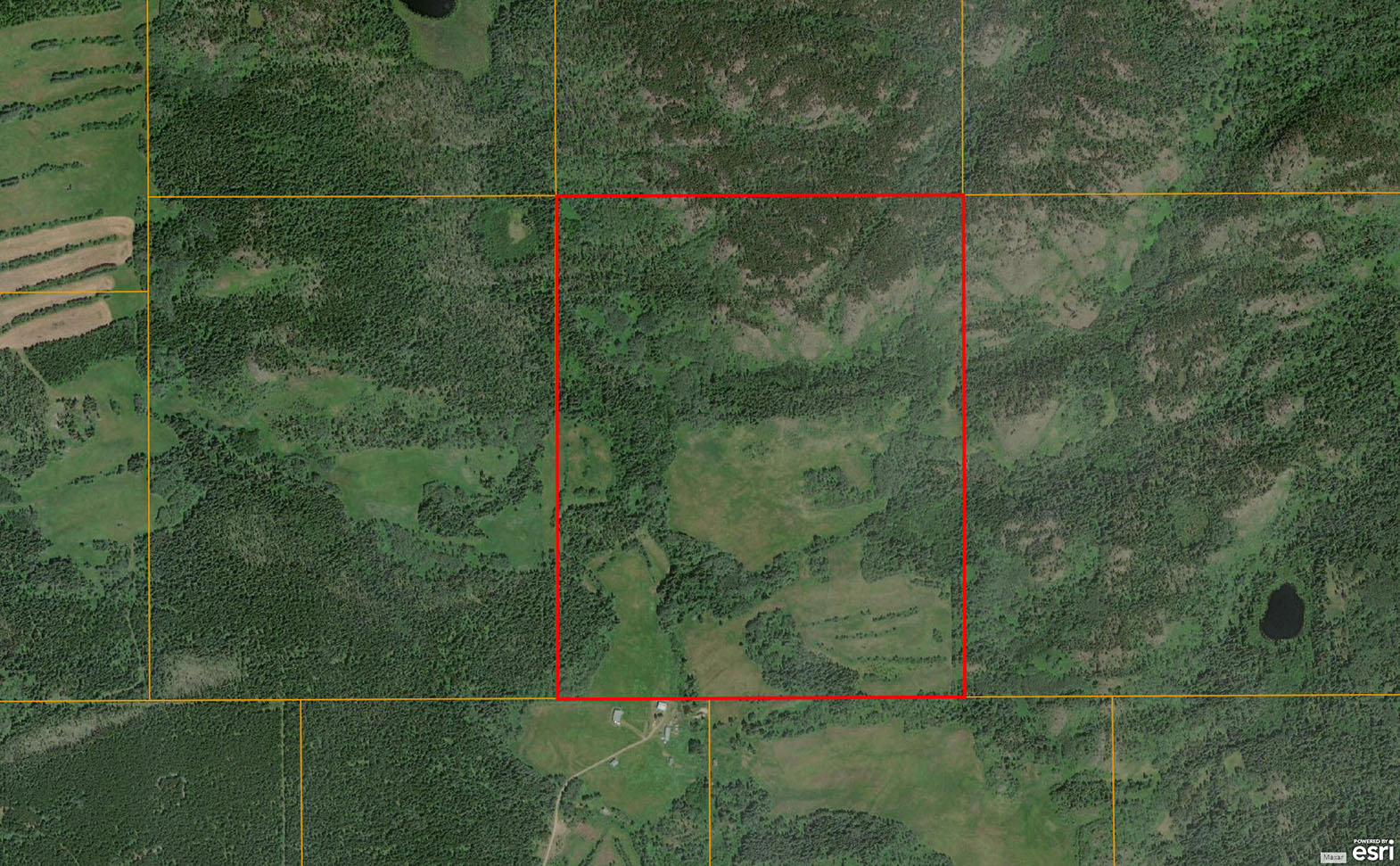 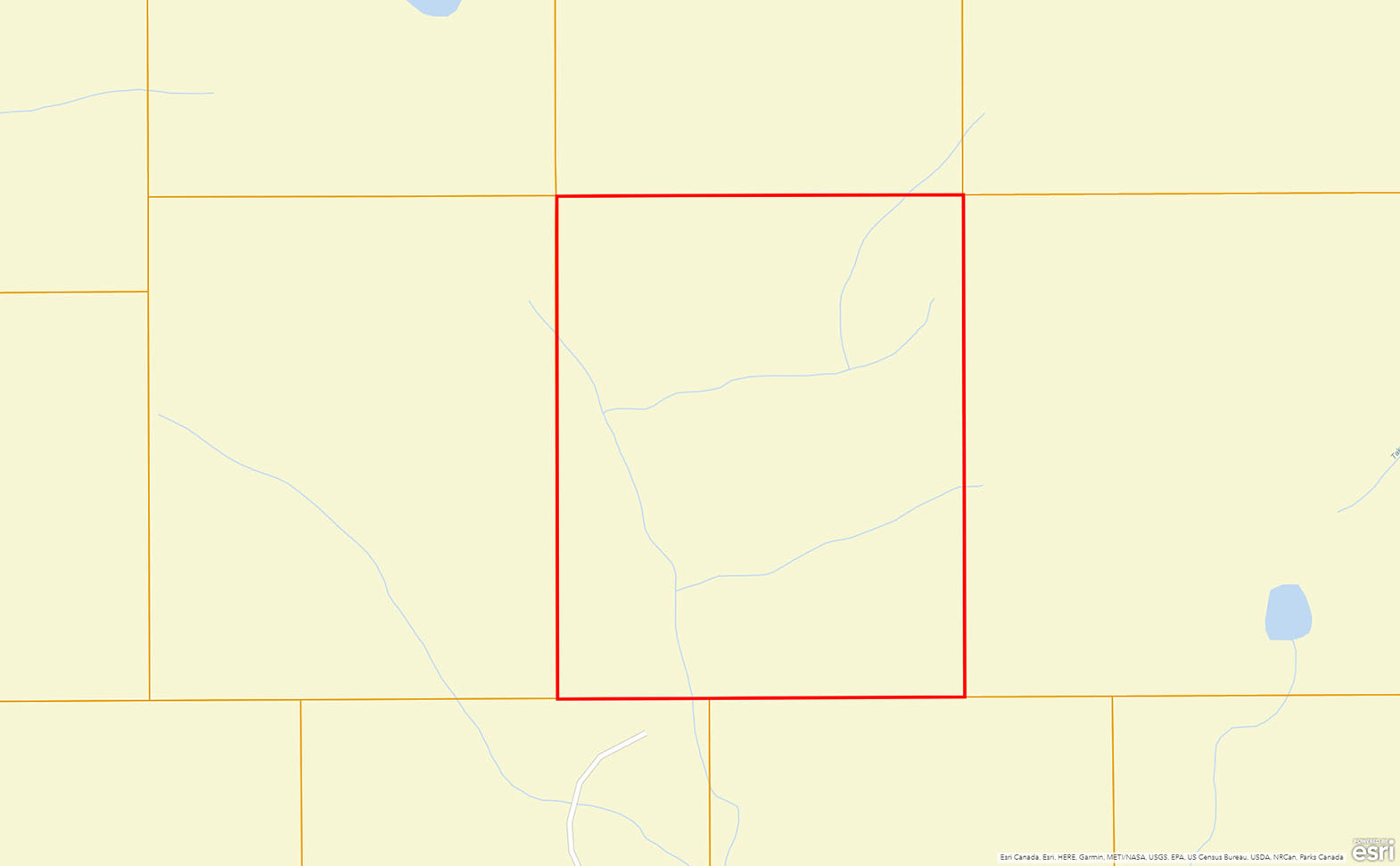 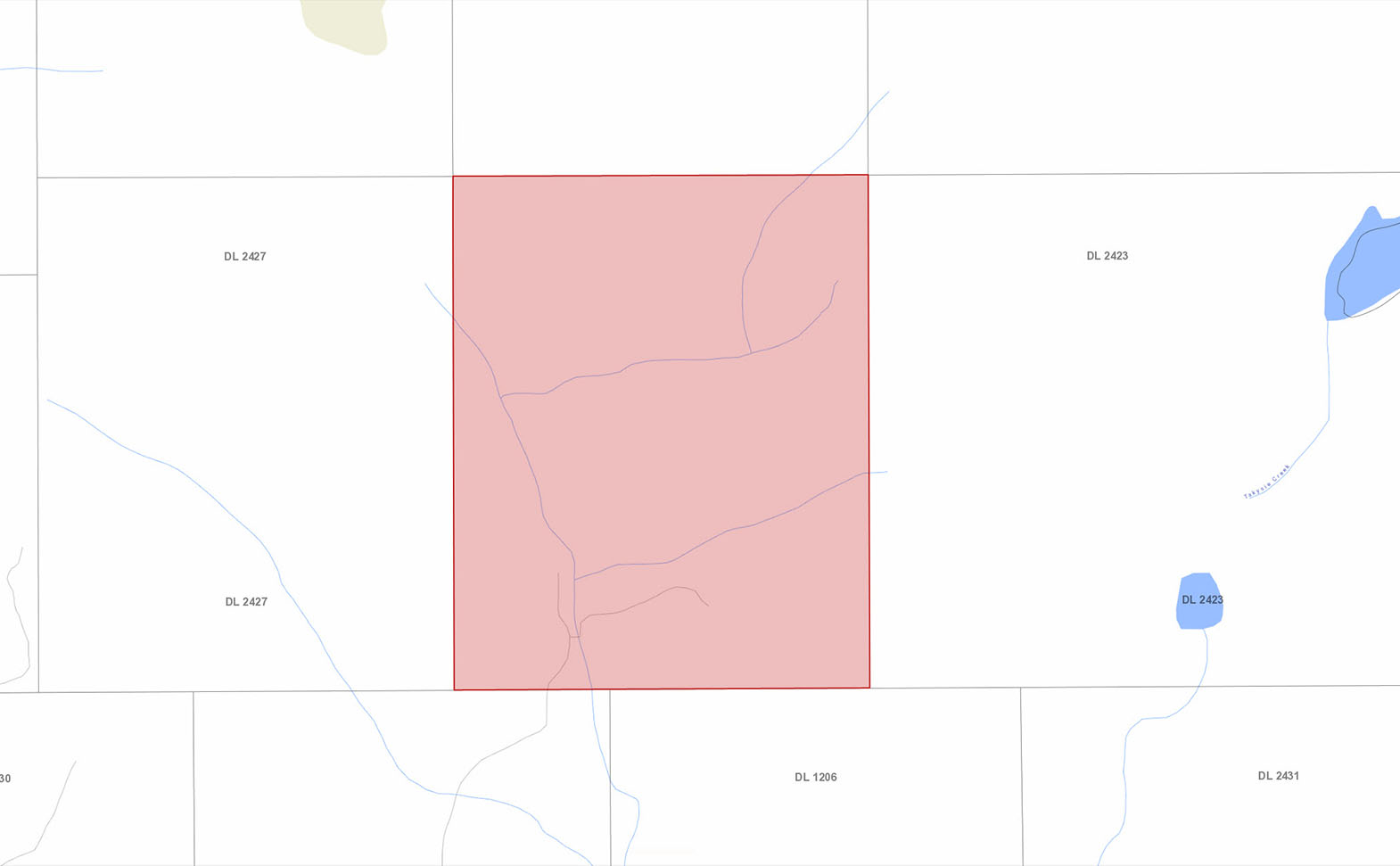