Outstanding property on the very picturesque Lund Lake. Here, rainbow trout are uniquely redder than most and subsequently very delicious. Lund Lake does not have predators and trout is abundant. There is great hunting all through this area. Panoramic views of Lund Lake, Ootsa Lake and Tweedsmuir Park will take your breath away.

From Burns Lake, take Highway 35 and cross Francois Lake on the ferry. Follow the main road from the ferry for 17.5 km and turn right onto Keefe’s Landing Road (Ootsa-Nadina Road). Follow this for 36.7 km to the signed road for Wistaria Provincial Park (on your left).

For Parcel A - travel another 6.5 km to Lund Lake Road on your right. Access to the property is another 620 m on the left.

The Lakes District of Northern BC embraces over 300 wilderness fishing lakes and 3,000 miles of pristine lake shoreline. This district extends from the Stikine Mountains in the west to the Omineca Mountain Range in the east. Bordered by Ootsa Lake in the south, the Lakes District extends north to Babine Lake. The Nechako Reservoir, sometimes called the Ootsa Lake Reservoir, was one of the largest reservoirs built in Canada.

The small communities of Noralee, Grassy Plains, Takysie Lake, and South Francois are closest to the property, each having very limited services. Burns Lake, approximately 60 km northeast of the property, has a population of 2,800. This town serves the surrounding 8,000 residents of the Regional District of Bulkley Nechako and is a hub for the local logging, saw-milling, mining and tourist industries. It also serves as the main commercial centre for the surrounding areas. Burns Lake has extensive health support and a recently constructed hospital.

The entire area known as the Lakes District is famous for its excellent fishing and game. There are several resorts throughout this area which offer boating, fishing, hiking, horseback riding, camping, cross-country skiing and many other activities. This area is well known for hunting and wildlife watching opportunities. Black, cinnamon and grizzly bears, deer, moose, wolves, coyotes and eagles can often be observed.

Ootsa Lake is a man-made lake created by the flooding of the Ootsa Lake region in the 1950s. It is a beautiful large lake which offers some of the best boating in the province of BC. This huge reservoir links together many lakes including Tahtsa, Whitesail and Natalkuz, popular destinations for fishermen from all over the world. These waters can yield spectacular results for large rainbow and giant lake char. Rainbow trout up to 15 pounds have been reported in Ootsa Lake. These lakes attract wildlife of many species and provides excellent opportunities for hunting and wildlife photography.

This property is located close to large tracts of open Crown land, with public access for horseback riding, quad and ATV use, as well as snowmobiling in the winter.

Nearby Francois Lake is approx. 110 km (68 miles) long, making it the second largest natural lake in British Columbia. It offers excellent rainbow trout and char fishing. Rainbow trout up to 5 and 6 pounds and lake trout (char) to 15 pounds are not uncommon. The entire area is famous for its excellent fishing and game. There are a number of resorts throughout this area which offer boating, fishing, hiking, horseback riding, camping, cross-country skiing and many other activities.

Ootsa Lake forms the northern border of North Tweedsmuir Provincial Park, one of the most scenic provincial parks in the province, is also the largest provincial park in BC. Tweedsmuir Provincial Park appeals primarily to outdoor recreationists interested in boating, angling, camping, hiking or hunting in one of North America’s most magnificent wilderness areas. Outdoor recreation opportunities are almost unlimited. The park is only accessible by air, water, foot or horseback and provides conservation for vegetation, wildlife and wilderness.

Lund Recreation Park set beside a small fishing lake is a four-unit camping area. There is a pit toilet, picnic tables, fire rings and a gravel boat launch. It is a great place to have a picnic, canoe, fish or hunt.

Ootsa Landing Rec site is 3-unit camping area alongside the large lake has a great beach where it is possible to hand launch small boats and canoes.

Wistaria Provincial Park is 30 hectares, and provides access to Ootsa Lake and has a waterfront day use area. Wistaria is not open to hunting.

In 1906 Harry Morgan and his partner journeyed from Bella Coola to Ootsa Lake, settling in what is now known as the Ootsa Lake Settlement. The next spring pack trains followed, bringing other European settlers to join them. The community grew, building roads, stores and farms. By 1916 the first school was founded. The road to nearby Houston was completed in 1917, allowing more settlers and supplies to flow into the community.

In March 1952 the Ootsa Lake Region, including the communities situated around Ootsa Lake, was flooded to generate electricity for the new Alcan plant in Kitimat. Many settlers moved away, leaving a core of old settlers to remain close to their old homes.

Burns Lake is called the “Heart of the Lakes District” and “Gateway to Tweedsmuir Park.” The village takes its name from Michael Byrnes, an explorer in the area who passed by the lake in 1866. Settlers were initially drawn to the area by the promise of gold in the Babine Lake vicinity. The actual village was formed in 1914 to service the workers creating the Grand Trunk Pacific Railway through the area. The arrival of the railway opened the forest industry, drawing more settlers and creating a stable economy for the area. Cultural Heritage: Wistaria Park lies within the asserted traditional territories of the Sekanni-Carrier and Wet’suwet’en First Nations. 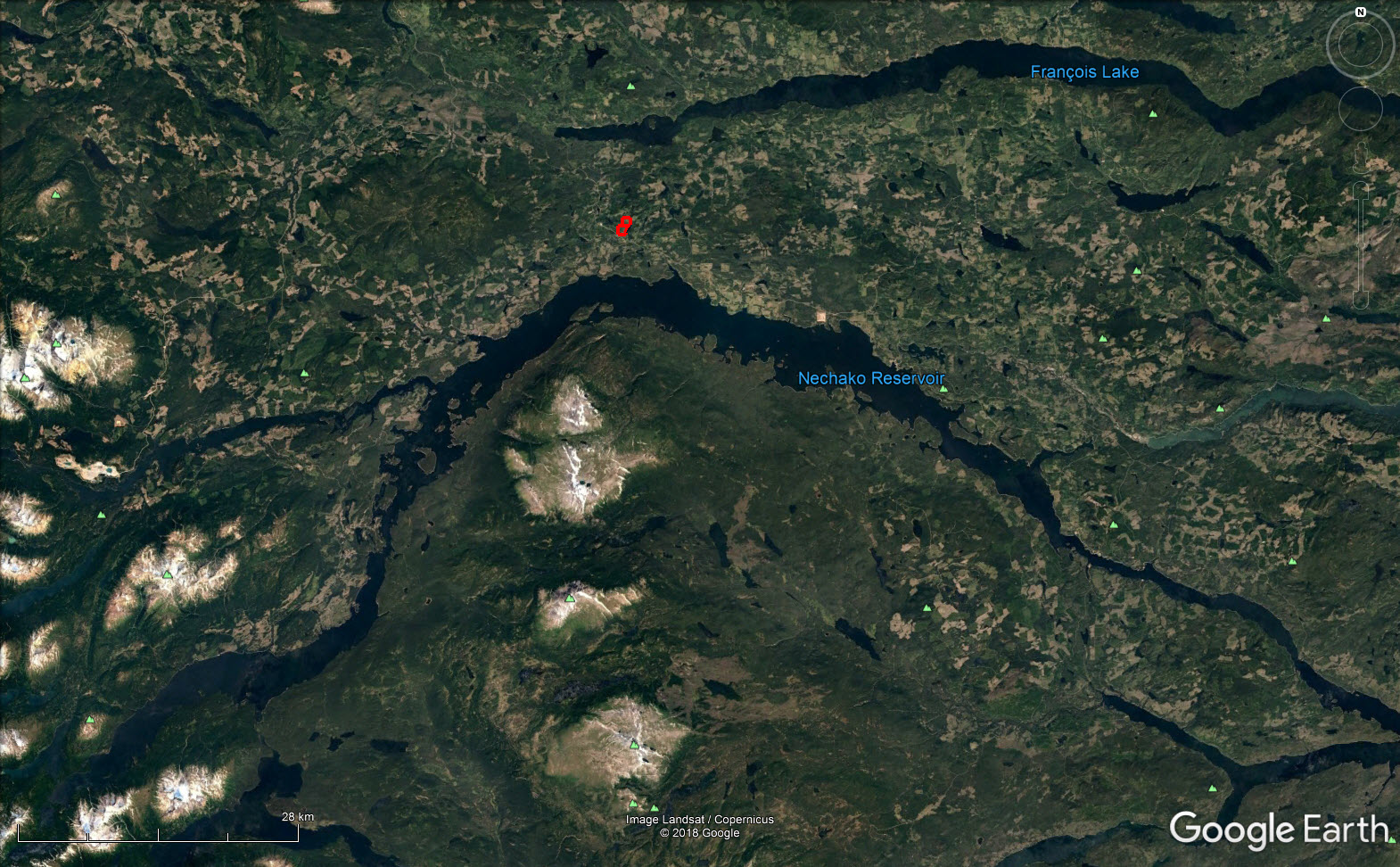